Steven Gerrard, who is set to leave Liverpool at the end of the season, is wanted by LA Galaxy and two other MLS teams. (Daily Mirror)

Gerrard's exact destination has yet to be confirmed, but the 34-year-old midfielder is likely to head to the US. (Liverpool Echo)

The prospect of being a substitute for much of next season has persuaded Gerrard to leave Liverpool at the end of the season and move abroad to a new club. (Daily Express)

The situation over Gerrard's future has become awkward and Liverpool hope that by announcing his departure it will enable the club to focus on the rest of the season without it hanging over them. (Independent)

Former Liverpool and England striker Peter Crouch, 33, says Gerrard is "easily the best player I have played with". (Liverpool Echo)

Liverpool are leading the chase to sign Bayern Munich midfielder Xherdan Shaqiri, 23, after making a permanent offer, while their rivals for the Switzerland star's signature, Inter Milan and Juventus, have only offered loan deals. (Metro)

Manchester United are set to make striker Radamel Falcao's loan deal from Monaco permanent within the coming days after becoming satisfied that the 28-year-old Colombia star is "fully up to scratch physically". (Metro)

Tottenham are interested in signing Everton midfielder James McCarthy. The 24-year-old cost the Toffees £13m when he joined them in September 2013. (Daily Mail)

Midfielder Frank Lampard, 36, could stay at Manchester City beyond the end of this season, says the club's manager Manuel Pellegrini. (Guardian)

Central defender Martin Demichelis, 34, will be offered a new one-year deal with Manchester City to keep him at the club until the summer of 2016.(Manchester Evening News)

Didier Drogba is set to hang up his boots at the end of the season as Chelsea close in on the signing of Croatian striker Andrej Kramaric, with the 36-year-old striker set to take up a coaching role under Jose Mourinho instead. (Daily Express)

Ryan Bertrand, 25, is ready to sign a permanent deal at Southampton when his season-long loan from Chelsea comes to an end. (Setanta.com) 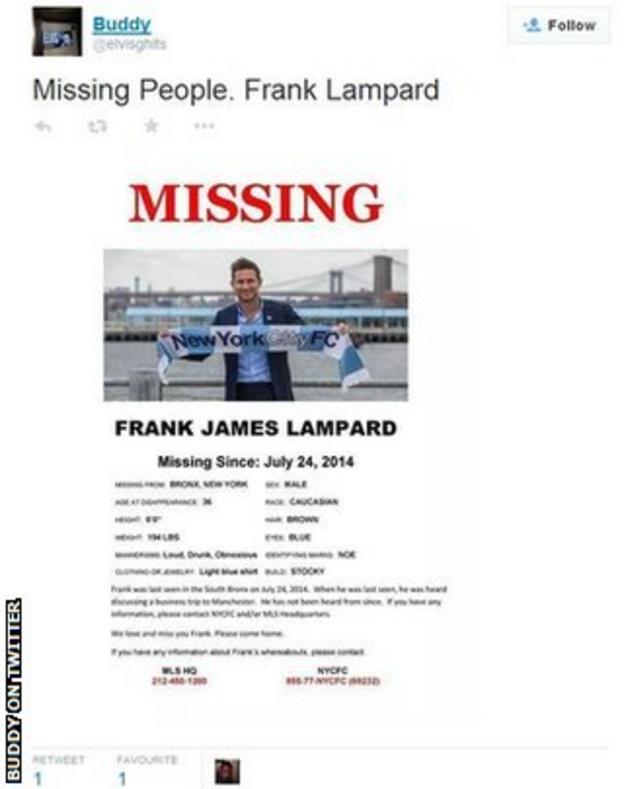 Chelsea manager Jose Mourinho may face a ban from the Football Association after he criticised the fitness of referee Phil Dowd following the Blues' 5-3 defeat by Tottenham on Thursday. (Times, subscription required)

Mourinho also says that attacking midfielder Eden Hazard, 23, needs to be protected by referees or the Belgium international will leave the Premier League.(Daily Telegraph)

Manchester United's Ashley Young, 29, who can play in midfield or as a wing-back, will be out for at least a month because of a hamstring injury. (Sun, subscription required)

Leicester manager Nigel Pearson has called for a greater use of television technology to decide controversial moments. It comes after the Foxes conceded a dubious penalty in their 2-2 draw at Liverpool. (Times, subscription required)

A New York City fan posted a 'missing poster' of Frank Lampard on Twitter after the 36-year-old midfielder extended his loan deal at Manchester City.

It was not just Townsend who was impressed with Kane as the 21-year-old striker was bombarded with marriage proposals following the victory over Chelsea.(Daily Star)