Real Madrid are on the brink of signing 16-year-old Norway midfielder Martin Odegaard - a reported target for many of England's top clubs - after flying him to the Spanish capital in a private jet on Tuesday evening. (Inside Futbol)

Manchester United say they have had no contact from the same player's representatives after he visited the club's training complex and Old Trafford before Christmas. (Manchester Evening News)

Meanwhile, the Gunners and the Saints will battle it out for £16m-rated Colombia midfielder Juan Quintero, 21, currently at Porto. (Daily Star)

Tottenham defender Younes Kaboul, 29, is set to quit the club after falling out of favour, with Turkish side Besiktas having made an approach. (Sun - subscription required)

Arsenal have had a bid rejected by Polish side Legia Warsaw for 17-year-old midfielder Krystian Bielik.(Sky Sports)

Liverpool are yet to approach Lille about a possible recall of 19-year-old Belgium striker Divock Origi, according to the French club's president Michel Seydoux. (Talksport)

Chelsea striker Islam Feruz, 19, is keen to sign for Cardiff City on loan until the end of the season. (Wales Online)

Manchester City striker Sergio Aguero, 26, could make his return from a knee ligament injury against Everton in the Premier League on Saturday. (Manchester Evening News)

Former Liverpool goalkeeper Bruce Grobbelaar believes the club could be plunged into "disarray" when captain Steven Gerrard, 34, leaves at the end of the season. Talksport

Goalkeeper Wojciech Szczesny, 24, expects to regain his place in the Arsenal team to face Stoke City on Sunday, despite the furore over him smoking a cigarette in the shower area of the dressing room after his most recent appearance. (Guardian)

Louis van Gaal admits his first six months in charge of Manchester United have not come up to scratch. (Manchester Evening News)

Hull City defender Harry Maguire, 21, has set his sights on becoming a Premier League regular in 2015 as he aims to kick-start a frustrating first season at the club. (Hull Daily Mail)

Peter Pannu has been re-elected to the board of Birmingham City's parent company. (Birmingham Mail)

Talks are at an advanced stage over a possible takeover of Sheffield Wednesday by a group of Thai investors. (Yorkshire Post) 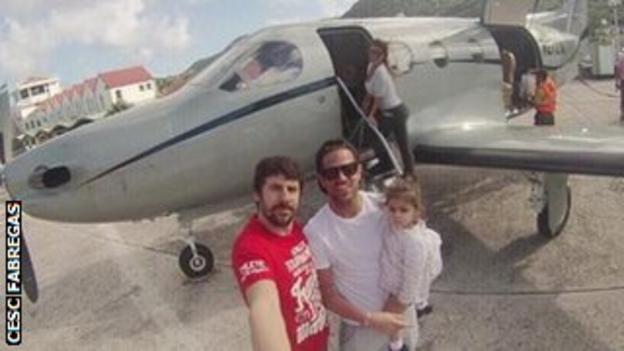 Chelsea midfielder Cesc Fabregas, 27, gave his Twitter followers a glimpse of the good life on Tuesday, posting an image of him boarding what looks like a private plane from a luxurious and sunny location.

Marco Verratti has revealed his Paris St-Germain team-mate Zlatan Ibrahimovic, 33, settled nerves during their 2012-13 title run-in by proclaiming they should put their faith in him as he is Jesus. (FourFourTwo)