Arsenal are expected to complete the signing of Brazil central defender Gabriel Paulista, 24, from Villarreal on Monday in a deal worth around £13.5m. Gunners striker Joel Campbell is set to head in the opposite direction on loan. (Daily Telegraph)

Tottenham are considering a £5m bid for 22-year-old Burnley striker Danny Ings with Chelsea and Manchester City also monitoring the situation before the transfer deadline.(Daily Mirror)

Winger Nani, 28, believes he could still have a future at Manchester United despite being allowed to spend the entire season on loan at Sporting Lisbon. (Daily Mail)

Chelsea manager Jose Mourinho fears his squad's lack of strength in depth may undermine their challenge for the Premier League title. (Independent)

Alan Shearer says Manchester United manager Louis van Gaal has "coached all the flair and imagination out of this team". (the Sun)

Manchester City are preparing to fly midfielder Yaya Toure, 31, and new striker Wilfried Bony, 26, back from Equatorial Guinea in time for Saturday's top-of-the-table match against Chelsea on Saturday should Ivory Coast suffer an early exit from the Africa Cup of Nations on Wednesday. (Daily Star)

While City manager Manuel Pellegrini has been branded "amateur" for deciding to arrive back from Abu Dhabi on Friday - with the squad landing just 20 hours before their FA Cup defeat at home to Middlesbrough. (the Sun)

Striker Daniel Sturridge returns to full training as he prepares for his much-anticipated comeback to the Liverpool first team. (Liverpool Echo)

Cardiff City centre-back Bruno Manga will head back to the Bluebirds after Gabon were knocked out of the Africa Cup of Nations. (Wales Online)

Former Rangers player Fernando Ricksen has thanked fans for their support as 41,000 turn out for his fundraising tribute match as he battles Motor Neurone Disease. (Herald Scotland)

Midfielder Jordan Henderson has the ability to take over as Liverpool captain and lead the team for years to come, ex-Reds midfielder Jason McAteer believes.(Talksport) 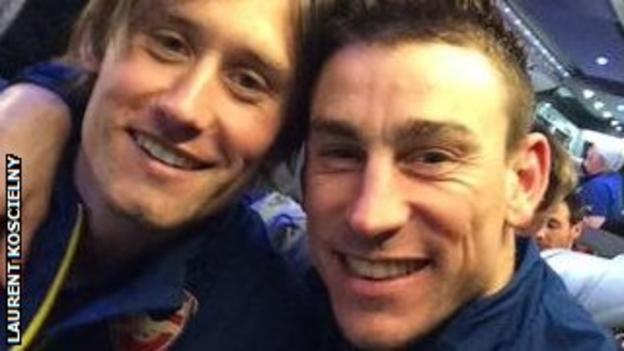 Arsenal defender Laurent Koscielny praises Tomas Rosicky (left) for his efforts in Arsenal's win in the FA Cup: With Super Tom - well done my friend Hard game today but we won. Now next round

Arsenal midfielder Aaron Ramsey: In the hat for the next round... thanks to our away support, loud as always.

West Ham keeper Adrian San Miguel after his side's FA Cup win over Bristol City: Well done boys!! On the way to the next round!

West Ham supporter and comedian Russell Brand: Man of the match is bloke in high vis who lives behind the goal. (referring to Ben Swift aka Eastend Shedman)

Aston Villa centre-back Jores Okore praising his team-mate and match-winner in the FA Cup Carles Gil: Good win today, through to the next round- what a goal by Carles Gil.

Andy Halliday, scorer of Bradford City's third goal in their 3-2 victory against Chelsea on Saturday, nearly did not play his part in the giantkilling as the 23-year-old winger's transfer from Middlesbrough was only completed with two minutes to spare before Friday's deadline.(Bradford Telegraph & Argus)

Meanwhile, it has been revealed that the Bantams squad went for a pre-match walk around Kensington and did Jose Mourinho impressions to ease their nerves ahead of the match at Stamford Bridge. (Daily Mail)

Former Chelsea captain Dennis Wise's appearance as a TV pundit on Ireland's Setanta Sports came to the attention of former team-mate Mario Melchiot - and others on Twitter - for his haircut, rather than his analysis.(Daily Mail)