West Brom striker Saido Berahino, 21, wants to leave the club at the end of the season to "move on to better things". (Times - subscription required)

David Moyes's Real Sociedad are preparing a bid to re-sign Real Madrid midfielder Asier Illarramendi, 24, who is also a target for Arsenal and Liverpool. (Daily Star)

Wolfsburg's new £24m signing Andre Schurrle, 24, has said he has no regrets about his Chelsea career after completing his move back to the Bundesliga. (Guardian)

Manchester United and Liverpool have been alerted to the availability of Inter Milan goalkeeper Samir Handanovic, 30, whose agent claims he will leave the club in the summer. (Daily Express)

After the breakdown of a deadline day move to Norwich, West Brom midfielder Graham Dorrans, 27, could join the Canaries on loan before the end of the season. (Birmingham Mail)

Tottenham striker Emmanuel Adebayor, 30, rejected a £1m-a-month offer in January to quit White Hart Lane for a club in Qatar, and has now held talks with Spurs chairman Daniel Levy and vowed to fight for a place in the first team. (Daily Mirror)

Premier League officials plan to write to Chelsea manager Jose Mourinho to ask him why he did not talk to the media before and after their 1-1 draw with Manchester City on Saturday. (Daily Star)

Former manager David Moyes banned chips at Manchester United because he had a couple of overweight players during his spell as Red Devils boss. (FourFourTwo)

New director of football Les Ferdinand is set to appoint ex-Tottenham boss Tim Sherwood as QPR manager with a brief to get underachieving players performing - as he did at Spurs last season with Emmanuel Adebayor. (Daily Mirror)

But Clement is likely to elect to remain in Spain, while Steve McClaren is also expected to reject Rangers and stay with Derby, leaving Sherwood as the main contender. (Times - subscription required)

Hull City are lining up Bolton manager Neil Lennon to replace Steve Bruce, who has led the Tigers to only four wins in 23 Premier League games this season. (Daily Mirror)

Jack Wilshere has risked a fresh row over smoking after the 23-year-old Arsenal midfielder was pictured appearing to hold a shisha pipe during a night out in London. (Daily Mail)

Former QPR boss Harry Redknapp has been invited to join a consortium which is aiming to buy a club on the south coast, where he lives. The group have been looking at a takeover at League Two side Plymouth, Conference club Torquay and Southern Premier League outfit Poole Town. (Daily Star)

Everton will honour the 96 Liverpool fans who died at Hillsborough with a commemorative plaque at Goodison Park before Saturday's Merseyside derby. (Liverpool Echo)

Sunderland manager Gus Poyet has invited Bradford City to switch their FA Cup fifth-round tie to the Stadium of Light after criticising the state of the Valley Parade pitch.(Daily Mail)

After joining Derby County on loan from Hull City, winger Tom Ince, 23, has revealed how his temporary spell at their Championship neighbours Nottingham Forest earlier this season turned sour.(Derby Telegraph)

Brighton boss Chris Hughton has added more experience to his backroom staff by bringing on board Ewan Chester as chief scout. Chester worked with Hughton at Birmingham and Norwich after over 20 years with Rangers.(The Argus) 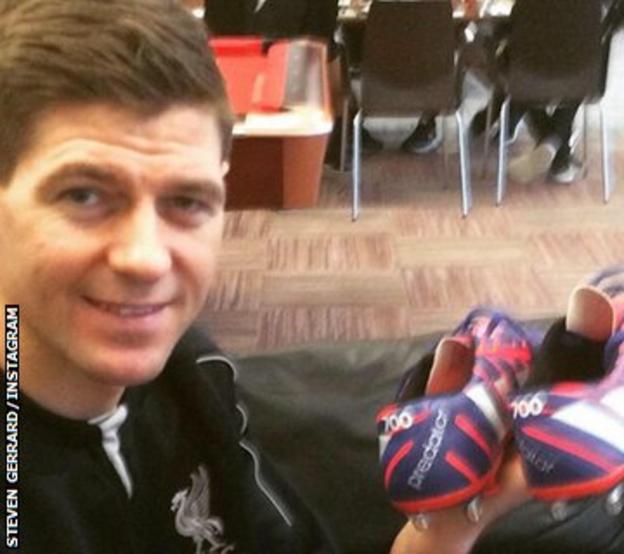 Steven Gerrard showed off a special pair of boots on Instagram as he prepared for his landmark 700th Liverpool appearance in the 2-1 FA Cup fourth-round victory at Bolton Wanderers on Wednesday. The 34-year-old said: "I will be wearing these in the next match I play in. Appearance number 700 for the Reds!"

Renowned sports psychologist Steve Black enjoys a caffeine overload as he shares a coffee or three on Instagram with QPR midfielder Joey Barton.

Having been given the all-clear following testicular cancer, Newcastle United midfielder Jonas Gutierrez has been raising awareness of the disease on social media.

Ex-Liverpool midfielder Dietmar Hamann tweeted that his former Anfield team-mate Danny Murphy was channelling his inner Bruce Forsyth with his choice of jacket for the BBC's TV coverage of Bolton against the Reds.

Plans have been revived to build a statue in honour of Newcastle legend Alan Shearer outside St James' Park. (Newcastle Chronicle)