Manchester United keeper David De Gea, 24, has not agreed a deal to sign for Real Madrid and has instead opened talks over a new deal with the Old Trafford club. (Daily Mail)

Southampton manager Ronald Koeman is keen on signing Marseille striker Andre-Pierre Gignac. The 29-year-old Frenchman is out of contract in the summer and attracting interest from West Ham United and Everton. (Daily Mirror)

Everton manager Roberto Martinez says he has no issues with Kevin Mirallas, a reported Tottenham target, after the 27-year-old midfielder said he was ready for a "new challenge".(Liverpool Echo)

Midfielder Andre Schurrle, 24, says he did not want to leave Chelsea after returning to his native Germany to join Wolfsburg for £24.6m on transfer deadline day. (Daily Star)

Tim Sherwood remains the favourite to become the new QPR manager but the club will widen their search after inquiries over the possibility of appointing Derby boss Steve McClaren and Real Madrid assistant Paul Clement were rebuffed. (Independent)

Arsenal manager Arsene Wenger has warned Tottenham Hotspur not to read too much into their north London derby victory on Saturday. (Daily Mirror)

Chelsea manager Jose Mourinho believes Branislav Ivanovic should be regarded as one of the club's best signings. The 30-year-old defender scored Chelsea's winning goal in Saturday's 2-1 victory over Aston Villa. (The Guardian)

Manchester City defender Pablo Zabaleta believes his side's lack of goals is to blame for their faltering defence of the Premier League title. (Daily Star)

Chelsea beat Aston Villa to move seven points clear of Manchester City, who were held to a draw by Hull, and Blues midfielder Nemanja Matic believes the weekend's results could be "decisive" in the title race. (Daily Express)

Newcastle midfielder Remy Cabella, 24, says he will give everything on the pitch for head coach John Carver after angering him by throwing down his water bottle following his substitution during United's 1-1 draw with Stoke City. (Shields Gazette)

Manchester United midfielder Daley Blind after Sunday's 1-1 draw with West Ham United: "Difficult game, happy with my goal but gutted we couldn't get the win. We need to keep fighting! #MUFC"

West Ham goalkeeper Adrian on Twitter after the match: "Great good team performance, playing so well but unlucky with their goal at the end of the game! Great atmosphere in Upton Park as always."

QPR midfielder Joey Barton seems to have little sympathy with injured team-mate Charlie Austin. Barton said: "Great to see Charlie Austin is off the life support and is now getting his nail varnish re-applied."

Chelsea defender Branislav Ivanovic was pictured looking sad in a team photo after his side's win over Aston Villa and team-mate Willian put up a photo of the pair of them with the Serbian looking dejected. 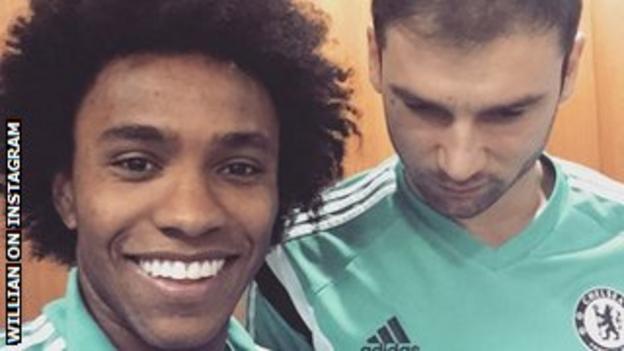 Manchester City midfielder Samir Nasri congratulated team-mates Yaya Toure and Wilfried Bony after winning the Africa Cup of Nations with Ivory Coast. The Frenchman tweeted: "Congratulation brother Yaya Toure you deserve it!!! I told you before the game you will succeed. Looking forward to have you back with Bony."

It was a special weekend too for Sunderland striker Connor Wickham - as Sunday was his father's birthday. "The support and encouragement I get from you is like no other and could never be beaten," Wickham posted on Instagram. "I'm proud of you dad! HAPPY BIRTHDAY!"

Winger Victor Moses, on loan at Stoke from Chelsea, announced the birth of his daughter on the Sport Lobster blogging site: "Delighted to announce the birth of my beautiful baby girl Nyah yesterday. Thanks for all of your messages."

Cristiano Ronaldo puts his Real Madrid side's 4-0 thrashing by derby rivals Atletico Madrid behind him with a bit of karaoke. (Daily Mail)

Tottenham Hotspur fans might think that Harry Kane is one of their own but a picture has emerged of the 21-year-old striker wearing an Arsenal shirt and celebrating the Gunners' Premier League title in 2004.(Daily Mail)

Rochdale midfielder Bastien Hery, 22, says he refuses to live in the town because it's a "dump" - and claims most of the town's residents are pensioners. (Manchester Evening News)

A cheeky ball boy refused to return the ball to Cristiano Ronaldo during Real Madrid's 4-0 defeat by Atletico Madrid, leaving the Portugal star laughing in disbelief.(Metro)