Juventus are lining up a summer move for Chelsea's Brazilian midfielder Oscar, 23. (Mediaset in Italian)

Aston Villa are closing in on former Spurs boss Tim Sherwood as the replacement for Paul Lambert as manager. (Daily Telegraph)

Meanwhile, former Aston Villa favourite Stiliyan Petrov claims Villa need to move for a manager currently without a club to come in and make an instant impact. (Talksport) 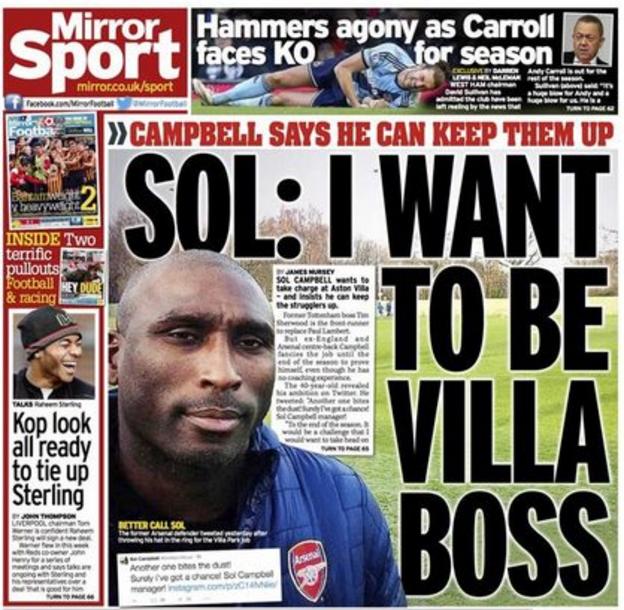 Arsenal manager Arsene Wenger believes his commitment to the FA Cup may have cost the Gunners in the Champions League. (Daily Mirror)

Newcastle midfielder Cheick Tiote, 28, could miss the rest of the season with a knee injury sustained playing for the Ivory Coast in the Africa Cup of Nations. (Northern Echo)

Leeds boss Neil Redfearn has angered some of the Italian players at Elland Road who have not been picked for recent games. (Daily Star)

Brentford manager Mark Warburton will leave the club at the end of the season after refusing to sign overseas players he had not watched. (Sun - subscription required)

Stoke City midfielder Steven Nzonzi, 26, has been told to curb his temper by the club's coaching staff. (Daily Mail)

Chelsea midfielder Ramires has not forgotten his former Benfica team-mate and fellow Brazil international Luisao, who celebrated his 34th birthday yesterday. "One of the greatest friends that football can give me," Ramires said on Instagram.

Leicester City's New Zealand international striker Chris Wood, 23, tweeted his best wishes to the Black Caps ahead of the start of the Cricket World Cup.

Liverpool goalkeeper Simon Mignolet, 26, attributes his return to form to advice from his fiancee. (The Guardian)

Sunderland boss Gus Poyet banned his players from sideways and backwards passes in training as they prepare for their FA Cup tie at Bradford. (Daily Mirror)