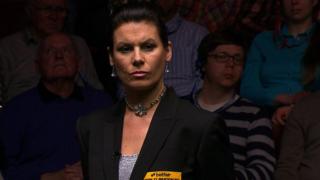 Three women who have officiated in men's snooker, rugby and football share their experiences with BBC Sport.

Michaela Tabb is a former pool player and referee who has worked at two World Snooker Championship finals, the first woman to do so.

Janie Frampton is a former football referee and became one of the Football Association's national referee managers.

BBC Sport is paying tribute to pioneering women in sport in the run up to International Women's Day on 8 March.