Chelsea striker Diego Costa, 26, says he turned down the chance to join Liverpool in 2013 after the Reds triggered a release clause in his contract at Atletico Madrid. (Mirror)

Pulis has called for life bans for Baggies fans who ripped up seats and threw them at rival fans during the weekend's 2-0 defeat at Aston Villa in their FA Cup quarter-final. (Daily Mail)

Aston Villa manager Tim Sherwood has breathed life into the club since his arrival, veteran goalkeeper Shay Given has said. (Talksport)

Liverpool defender Glen Johnson, 30, criticised the state of the Anfield pitch after the Reds' goalless draw with Blackburn in the FA Cup quarter-final at Anfield on Sunday.(Liverpool Echo)

QPR manager Chris Ramsey believes his team's recent run of defeats are attributable to small margins but has said there will be no excuse for failure in their next three matches.(Times - subscription required)

Wilfried Bony has warned Manchester City fans it may take a little time to find his feet at the club following his move from Swansea. (Manchester Evening News)

Brazil defender David Luiz has raised the tensions before Chelsea's Champions League match with PSG by branding former manager Jose Mourinho as 'not special to me'. (Daily Express) 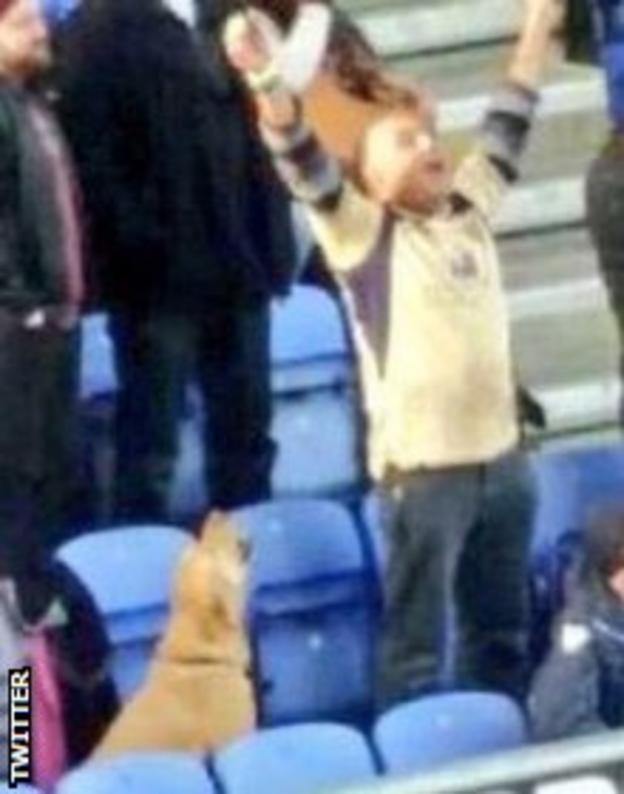 Photographs have emerged on Twitter of a Leeds fan who smuggled a dog into the Yorkshire side's 1-0 Championship win over Wigan - with the pooch appearing to celebrate when his master's team score.

England Under-15 international Jadon Sancho has spoken of his delight at joining Manchester City from Watford on a £500,000 deal, as well asretweeting a video of his remarkable footwork.

Grays Athletic player-manager Mark Bentley led by example when he came off the bench to score the equaliser in a Ryman Premier League match against Hampton and Richmond Borough before going in goal and saving a penalty after his keeper was sent off. His side went on to win 3-2. (Metro)

Spurs manager Mauricio Pochettino has revealed even his sons Sebastiano and Maurizio joined in the Harry Kane songs when the striker scored a double against QPR in the 2-1 win on Saturday. (Mirror)