Valencia are eyeing a £20m summer move home for Manchester United midfielder Juan Mata, 26, who played for them until his 2011 move to Chelsea. (Daily Mirror)

Chelsea have made an approach to sign teenage Brazilian striker Kenedy, his representative has confirmed. The 19-year-old has already been the subject of a £5.7m bid from Manchester United. (Metro)

Manchester City officials are thought to be losing patience with striker Edin Dzeko, and could listen to offers for the 29-year-old in the close season. (Daily Star)

Former Manchester City boss Roberto Mancini says his successor Manuel Pellegrini was "really lucky" to inherit a strong side from him and he should be winning a trophy every year. (CNN)

Sunderland will face competition from Nigeria to land Sam Allardyce as their permanent manager from next season with Allardyce's contract at Upton Park due to expire at the end of the current season. (Sun - subscription required)

Adam Johnson, currently on bail following his arrest on suspicion of having sexual activity with a 15-year-old girl, could feature for Sunderland manager Dick Advocaat after club confirmed it would "review its position" on the player's suspension.(Daily Mail)

Atletico Madrid forward Fernando Torres says he felt like he was "swimming in wet clothes" during his unsuccessful stint at Chelsea.(Sky Sports)

Liverpool fans arriving at the Manchester United game on Sunday will see the steel structure of the new Main Stand at Anfield - which will add an extra 8,500 seats to that side of the ground.(Liverpool Echo)

Southampton manager Ronald Koeman admits he wants to manage Barcelona one day, where he spent six years as a player. (Daily Mirror)

Liverpool striker Mario Balotelli has gone on Instagram to attack his critics, saying: "Do you know me? Did you ever talk to me, personally? You just saw me play football on the pitch. Man, shut up." (Daily Telegraph)

Stoke defender Robert Huth, on the subject of Arsenal's defeat on away goals against Monaco, tweets: "Away goal is such a bad rule! Just doesn't make sense."

And Arsenal midfielder Mesut Ozil, who played in the match, tweeted: "It's so hard to be kicked out of the Champions League after such a result and such a game." 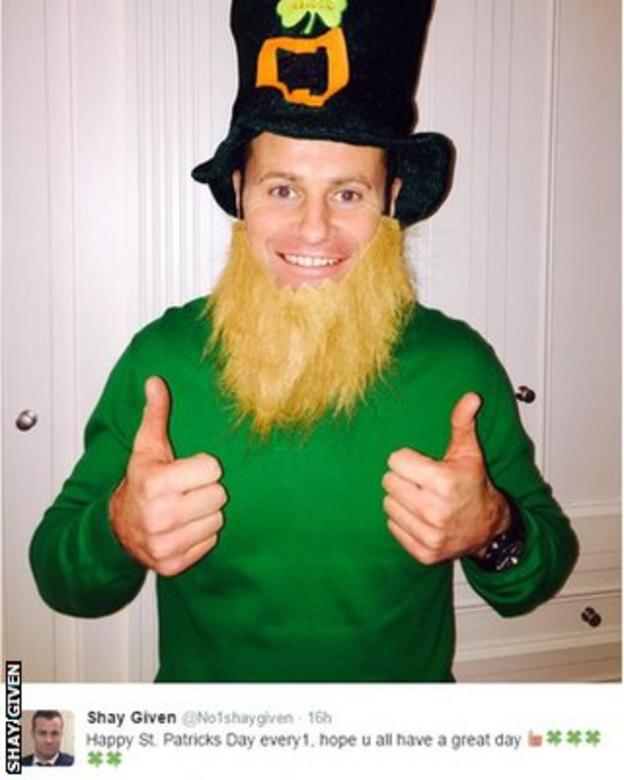 Aston Villa's Republic of Ireland goalkeeper Shay Given got more into the spirit of his country's day of celebration on Tuesday, dressing up as a leprechaun.

Benfica's Romario Balde endured the ultimate day to forget in the Uefa youth league quarter-finals. He missed a penalty, saw his side concede an equaliser, was substituted, and then watched his team-mates get knocked out - on penalties. (Metro)

Somerset cricketer Peter Trego has found a way to keep himself fit ahead of the new county cricket season by signing a short term contract with Conference South club Bath City. The 33-year-old all-rounder has previously played for Margate, Weston-super-Mare, Clevedon Town and Chippenham Town.(Bathcityfc.com)