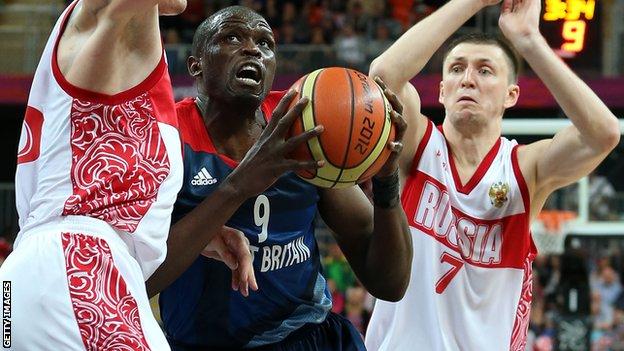 Basketball has been given fresh hope of receiving UK Sport funding after the body said it would take participation levels into account for the first time.

The government agency will continue to focus on sports with medal chances but participation will be used as a factor in sports unlikely to win a medal.

Last year, basketball's funding was stopped because it stood little chance of winning an Olympic medal in 2016.

Nearly 218,000 people play basketball in the UK every week.

Participation levels will not guarantee funding for sports such as basketball, synchronised swimming and water polo, which all saw their funding cut ahead of Rio 2016.

However, Minister for Sport Helen Grant said: "I am pleased that UK Sport is open to taking the broader value of its investment into account in its funding decisions."

British Basketball admitted to "mixed feelings" over the news in a statement.

British Basketball performance chairman Roger Moreland said: "On the face of it, while it was not the news that team sports were hoping for, I do at least take some comfort from the words of Minister for Sport.

"She has explicitly spoken about her pleasure that UK Sport are at least open to taking the broader value of its investment into account in its funding decisions. We have to now see how this unfolds and how it can be interpreted."

UK Sport will also continue to invest primarily in athletes who can win a medal within eight years but will consider funding for a longer period of time "where there is a performance need and if finances allow".

The agency's funding criteria, which has been based purely on performance, helped Britain move from 36th in the Olympic medal table at the 1996 Games in Atlanta to third at London 2012 with 65 medals.

In 2014, basketball was one of seven sports which had its money withdrawn controversially but in November the sport received £1.18m of emergency funding from Sport England after the government intervened.

Meanwhile, Sport England has taken £1.53m from the governing bodies of swimming, rugby league, gymnastics and horse riding because they failed to meet participation targets.

The money will be "reinvested in alternative projects to explore new ways of producing better results in those sports" according to a Sport England statement.

Sport England chief executive Jennie Price said: "Sometimes we need to take tough decisions to protect our much-needed investment in grassroots sport. Today is one of those times."

Swimming is the most popular participation sport in England with more than 2.6 million adults taking part once a week, according to the sport's governing body, the Amateur Swimming Association (ASA).