Gareth Bale, 25, is prepared to reject all offers of a return to the Premier League and stay at Real Madrid. (Daily Mail)

Belgium international Kevin De Bruyne, 23, will resist the lure of "top clubs" and stay at German side Wolfsburg after enduring a disappointing time at Chelsea, according to team-mate Marcel Schafer. (London Evening Standard)

Schalke's Greece international defender Kyriakos Papadopoulos, 23, currently on loan at Bayer Leverkusen until the end of the season, is keen to move to a new league, offering encouragement to Liverpool, who have watched him for the last two years. (Metro)

Cameroon international Alex Song faces an uncertain future after it emerged that West Ham have huge reservations over a permanent deal to sign the 27-year-old on-loan midfielder from Barcelona. (Daily Mail)

Arsenal and Liverpool are interested in Luiz Adriano, the 27-year-old Brazil international who has revealed he is unlikely to remain in Ukraine when his contract with Shakhtar Donetsk ends in December. (Talksport)

Tottenham winger Aaron Lennon, 27, says there have been no talks about turning his loan move at Everton into a permanent one, but believes the switch from Spurs has been a "fresh start". (Liverpool Echo)

Stoke midfielder Charlie Adam, 29, says he would be happy to sign a contract for at least one more season. (Stoke Sentinel)

Southampton are lining up a summer move for Braga's Eder, the 27-year-old Portugal international striker who is out of contract in June next year and looks unlikely to sign a new deal. (Talksport)

Swansea are planning to sort out a new contract for Neil Taylor, 26, to end any more talk of the left-back leaving the Liberty Stadium. (South Wales Evening Post)

Chelsea will move to sign QPR goalkeeper Robert Green, 35, in the summer as a replacement for 32-year-old Petr Cech, with the Czech Republic set to leave Stamford Bridge for £10m at the end of the season. (The Times - subscription required)

Chelsea skipper John Terry has described how one phone call from Jose Mourinho in the summer of 2013 helped save his career. (The Sun - subscription required)

Chelsea's £26.1m January signing Juan Cuadrado, who has played just 175 minutes so far, is confident he will be a success at Stamford Bridge - and has praised manager Jose Mourinho for his paternal management style. (London Evening Standard)

Former Liverpool and Chelsea boss Rafael Benitez, linked with a return to the Premier League, has refused to discuss his plans beyond the end of this season, when his two-year deal with Napoli expires. (Daily Mirror)

Arsenal's Mesut Ozil believes he can win the Ballon d'Or - the world player of the year award - in the next few years and says criticism from pundits only motivates him more. (Sky Sports)

Goalkeeper Wojciech Szczesny, 24, must leave Arsenal in order to save his career, according to former Liverpool number one Jerzy Dudek. (Daily Star)

Liverpool's Champions League winner Harry Kewell will return to Anfield on Sunday for a charity match with Steven Gerrard and Jamie Carragher as team captains. The game will feature current Liverpool players not on international duty, academy players and top names from across Europe. (Liverpool Echo)

Aston Villa currently have the worst injury problems in the Premier League, with nine players out of action. (Birmingham Mail)

Newcastle are considering a pre-season tour of the United States to help increase the club's global fanbase. (Newcastle Chronicle)

Liverpool legend John Barnes claims 20-year-old Raheem Sterling is not ready for a move away from Anfield after the winger recently delayed talks over a new contract. (Talksport)

Barcelona's Lionel Messi is the highest-paid footballer in the world, ahead of Real Madrid's Cristiano Ronaldo, banking nearly £1m a week in wages and sponsorship deals. (France Football) 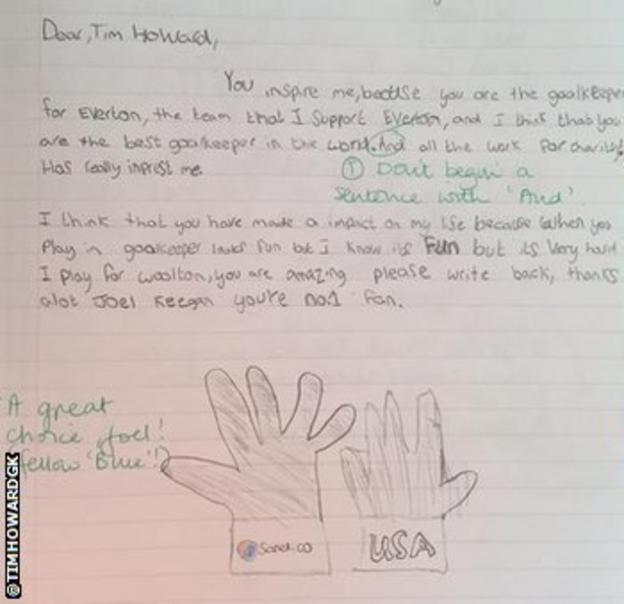 Everton goalkeeper Tim Howard has tweeted a letter received from a young fan who says how much Howard has inspired him, the USA international replying: "Thanks for the note Joel! Hope to see you suit up for the Blues one day!"

Newcastle's Jonas Gutierrez, who has fought off cancer this season, tweets: "A club is not about a owner, a manager or a player, is about the fans and I am proud about the fans of Newcastle, thanks for the support and love, that is the most important."

Liverpool centre-back Martin Skrtel has posted a picture of clowns on his Instagram following the Football Association's decision to uphold his ban for violent conduct.

Mozambique side Ferroviario Maputo demonstrated the perils of celebrating for too long - after their opponents scored a last-minute equaliser from the kick-off while the goalkeeper was out of position. (Metro)

In an interview with Shooting Gazette, former England defender Sol Campbell has revealed he loves to dress up in country gear and go bird-shooting. (Daily Mirror)