Chelsea are monitoring the situation of Liverpool vice-captain Jordan Henderson after the 24-year-old midfielder turned down a new contract worth £80,000 a week. (Daily Star)

The Anfield side are in talks with Manchester United striker Radamel Falcao, who is on a season-long loan from Monaco, as they look to sign the 29-year-old Colombia international on loan next season. (Metro)

Manchester City boss Manuel Pellegrini says the club will invest in a "big player" this summer - and want the star signing to be an Englishman. (Daily Express)

Arsenal are close to signing precocious Argentine performer Maximiliano Romero from Velez Sarsfield for £4.5m. The 16-year-old has been dubbed the 'next Lionel Messi'. (The Sun - subscription only)

Chelsea midfielder Oriol Romeu, 23, is ready to quit Stamford Bridge in the summer. The Spaniard is on loan at Stuttgart this season and has made just 15 starts for the Blues since arriving from Barcelona in 2011. (Mirror)

As Spurs compete for a Europa League place, striker Emmanuel Adebayor, 31, will lead the clearout of players from White Hart Lane this summer. Defender Younes Kaboul, 29, and midfielders Etienne Capoue and Paulinho, both 26, are also likely to be sold. (The Sun - subscription required)

Liverpool manager Brendan Rodgers is facing a dressing-room crisis after accusing several players of not playing for him. The Reds were thrashed 4-1 by Arsenal on Saturday, leaving them with a difficult task to finish in the Premier League top four. (Mirror)

And Rodgers has conceded that Liverpool will struggle to attract big names in the summer after giving up on Champions League qualification. (Daily Telegraph)

Newcastle fans turned on Tim Krul on social media after the keeper appeared to congratulate Sunderland's Jermain Defoe on his winner in the Tyne-Wear derby. (Independent)

Tottenham manager Mauricio Pochettino has conceded his side are unlikely to make the top four after Sunday's 0-0 draw with Burnley left them seven points off a Champions League spot with seven Premier League games remaining. (Guardian)

QPR boss Chris Ramsey says "without a shadow of a doubt" relegation rivals Aston Villa will stay up, thanks to the management of former Spurs colleague Tim Sherwood. (Daily Mail)

Chelsea are on course to spoil Steven Gerrard's farewell season at Liverpool by clinching the Premier League title against the Reds at Stamford Bridge. (Daily Telegraph)

Newcastle manager John Carver has warned his players they may get pulled into a relegation fight if results do not improve. The 1-0 defeat by Sunderland on Sunday left the Magpies nine points above the relegation zone with seven games left.(Guardian)

An Australian consortium and groups from the Far East have registered an interest in taking over West Bromwich Albion after owner Jeremy Peace suggested he could sell the club for £150m.(The Times - subscription required)

Bolton striker Eidur Gudjohnsen, 36, says he will play on for another season in an effort to make it to Euro 2016 with his national team Iceland.(The Times - subscription required)

Club Tijuana's Juan Arango was caught by TV cameras biting the shoulder of opponent Jesus Zavela in a Mexican league match. The referee did not see the incident.(Daily Mail)

Paris St-Germain striker Zlatan Ibrahimovic has added to speculation about his future by applying for a United States visa.(Aftonbladet - in Swedish)

Chelsea boss Jose Mourinho has described striker Loic Remy as a "crucial" player for the Blues after he scored the winner against Stoke on Saturday. (Sky Sports)

Sunderland's Jordi Gomez expressed his joy after his side beat rivals Newcastle on Sunday, courtesy of Jermain Defoe's stunning volley. He tweeted: "Is there a better way of WINNING a DERBY? No." 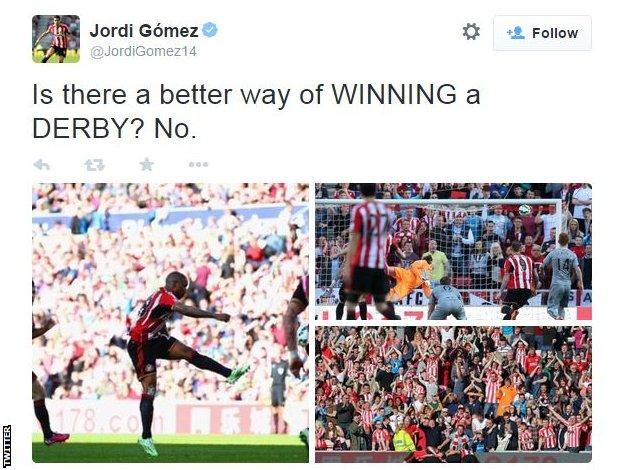 Liverpool full-back Jose Enrique was pleased to see Newcastle's Jonas Gutierrez play against Sunderland. Gutierrez started his first game for Newcastle since August 2013 following his recovery from testicular cancer. The Spaniard tweeted: "Really happy for you my friend @elgalgojonas to see you back playing 90 minutes."

The world's oldest professional outfield player, Kazuyoshi Miura, proved age is just a number after the 48-year-old scored a header for Yokohama FC in the second division of the J-League. The former Japan striker - who retired from international football 15 years ago - followed up the goal with a dancing celebration. (Metro)