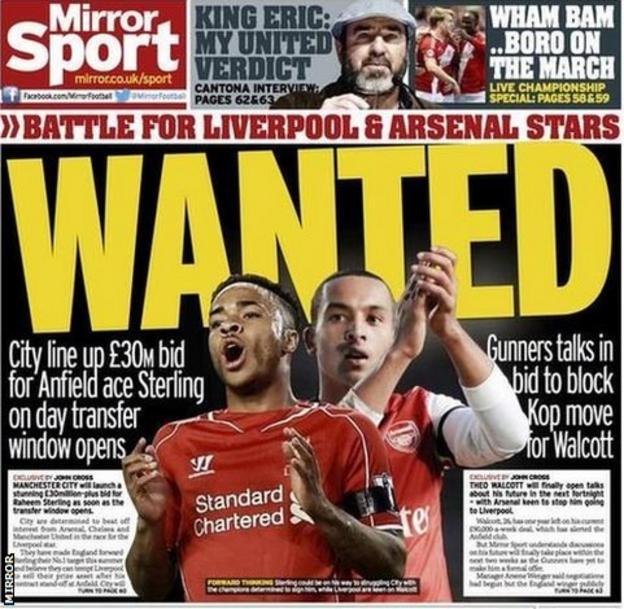 City could pay as much as £50m to sign Sterling. (Daily Mail)

But Liverpool chief executive Ian Ayre says Sterling will not be leaving Anfield in the summer. (Daily Express)

The Sky Blues, meanwhile, have identified West Ham's Aaron Cresswell, 25, as a possible answer to their troubled left-back position. He would also help to fill their quota of home-grown players. (Times - subscription needed)

Atletico Paranaense attacking midfielder Nathan, 19, is set to have a medical at Chelsea ahead of a £4.5m move to Stamford Bridge. (Daily Telegraph)

Swansea have made an offer to sign Marseille's forward Andre Ayew, 25. (Le 10 Sport - in French)

But the Ghana international has admitted he has always been a Liverpool fan. (London Standard)

The South Wales club have also been linked with the Austrian national team skipper Christian Fuchs, 29. The left-back is set to become a free agent at Schalke. (South Wales Evening Post)

Aston Villa want to make Tom Cleverley's loan from Manchester United permanent with a £40,000-a-week contract. Everton are also interested in the 25-year-old England midfielder who is a free agent in the summer. (Daily Telegraph)

Serie A side Sampdoria want to bring Liverpool striker Mario Balotelli, 24, back to Italy according to their president. (Gazzetta - in Italian)

West Ham striker Carlton Cole, 31, says he will move abroad if he is not offered a new contract at Upton Park. (Metro)

Stoke City goalkeeper Asmir Begovic, 27, has hinted he is ready to sign a new contract with the Potters this summer but will not start talks until the end of the season. (Stoke Sentinel) 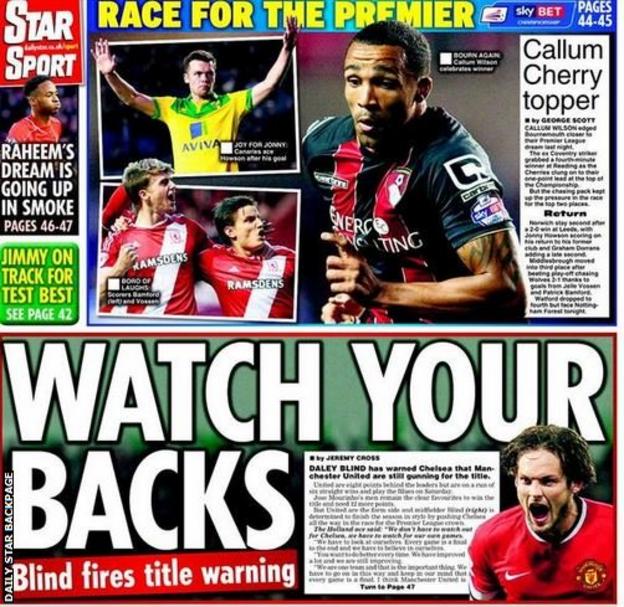 But Liverpool team-mate Joe Allen says Sterling does not get distracted by off-field controversy. (Daily Star)

A third of the 92 Premier League and Football League clubs are owned by oversees proprietors, increasing the risk of tax avoidance. (Guardian)

Aston Villa goalkeeper Shay Given does not think much of team-mate Charles N'Zogbia's fashion choices. The Republic of Ireland keeper labelled the Frenchman's floral outfit the "worst ever" in a post on Twitter with a picture of the offending fashion crime.

Manchester United's Spanish goalkeeper duo David De Gea and Victor Valdes enjoyed a day out at a theme park. De Gea tweeted a picture of their fun in the sun.

Chelsea midfielder Cesc Fabregas has been enjoying the April sun in London. In a post on Instagram the Spanish midfielder wrote "London or the Caribbean."

Arsenal's Chilean forward Alexis Sanchez has also been making the most of the early summer, tweeting a picture with his dogs.

Robin van Persie's son Shaqueel appears to have inherited his father's eye for goal. The Manchester United striker filmed the youngster scoring a stunning scorpion-kick in his back garden and posted it on Instagram.

Barcelona forward Lionel Messi says he cannot remember all of the 32 hat-tricks he has scored. (FC Barcelona)