The FA Cup is set to be rebranded as the Emirates FA Cup in a new £30m sponsorship deal. (Daily Mail)

Manchester United are confident they have won their battle to keep goalkeeper David De Gea for at least one more season by offering the 24-year-old an improved contract this summer in the region of £200,000 a week. (Independent)

Real Madrid have 48 hours to make a decision on striker Javier Hernandez, 26, as the clock runs down on their first option to buy the Manchester United striker. (Daily Mail)

Manchester United winger Adnan Januzaj, 20, is set to sign a year-long loan deal with Everton at the end of the season. (The Sun - subscription)

Manchester United are lining up a £29m move for Liverpool transfer target Radja Nainggolan, 26, after scouting the Belgium midfielder at a recent game. (Corriere dello Sport - in Italian) 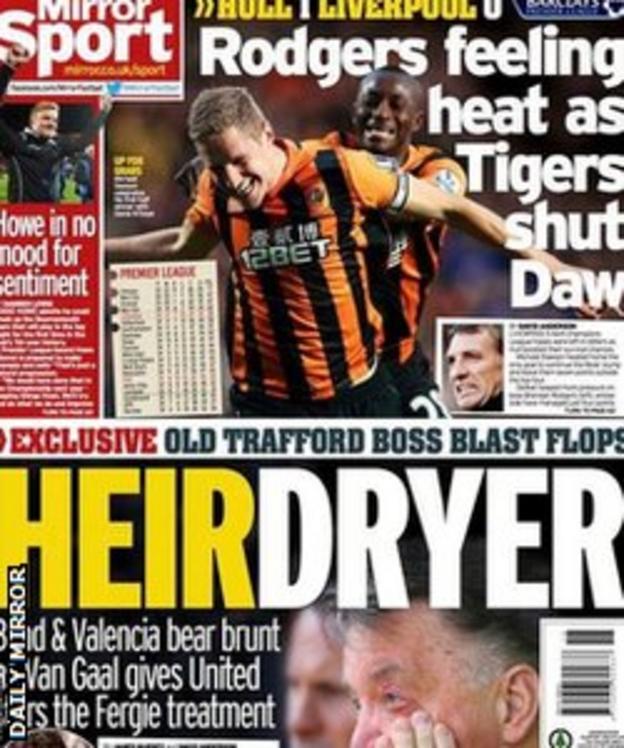 Everton and Newcastle have made contact with Crystal Palace over a £15m Yannick Bolasie deal, with Stoke also keen to sign the 25-year-old DR Congo winger.(Daily Mirror)

Christian Benteke's agent says there has been no interest in his client and that the 24-year-old striker is only focused on his Aston Villa career. (The Times - subscription)

Chelsea will only allow 21-year-old forward Patrick Bamford to join a Premier League club on loan next season if he is guaranteed regular first-team football.(Evening Standard)

Meanwhile, the Blues are set to become the first Premier League champions in over a decade to have recorded a profit in the transfer market. (Metro)

Manchester United pair Antonio Valencia and Daley Blind got the 'hairdryer' treatment from coach Louis van Gaal at the club's training ground after the side's 3-0 defeat at Everton.(Daily Mirror)

Bournemouth will need to spend some of the potential £130m for promotion to the Premier League on stadium and ticket office upgrades. (The Times - subscription)

Manchester United fear striker Wayne Rooney could miss the rest of the season with a knee injury. (Daily Express)

A study suggests a 40% of FA Youth Cup winners never play a senior game for the club. (Telegraph)

West Ham striker Carlton Cole giving advice to his team-mate? Walked into the canteen today to find James Tomkins having his breakfast. He needs to start his day like this.

Hull defender Curtis Davies after the relegation-threatened side defeated Liverpool 1-0: Unbelievable effort from each and every one of the lads! Massive 3 points but the job's not done yet!

A phone call from John Carver inspired a Newcastle fan to back the under-fire Newcastle caretaker coach. (Newcastle Chronicle)