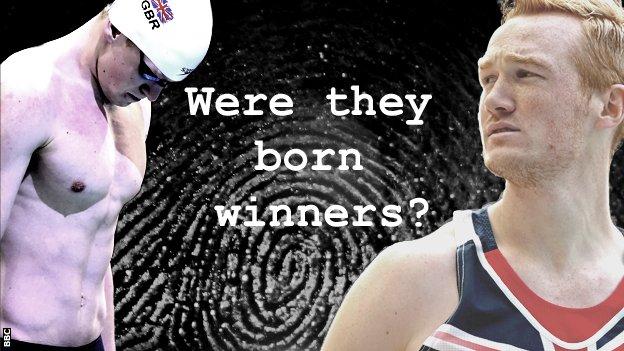 At 42 years old you don't get to find out too many new things about yourself so it's been an exciting, albeit slightly nervy week for me.

Perhaps I should explain. Last week my family and I - husband Kenny and my children, Lois and Reuben - sent off a swab to be DNA tested to find out about our genetic make-up.

The test would look at genes that affect fitness and health, what foods we respond best to and perhaps which sports we're most likely to be good at. If we have the sprinter genes, for example.

It was all very simple. We placed our swabs in test tubes, posted them to a laboratory in London and, seven days later, the results arrived.

By the way, this isn't part of a grand plan to turn Lois and Reuben into Olympic champions but for a programme called The Olympic Journey: Born Winners, broadcast on BBC Two this Sunday.

The overarching question we asked was: how much of our sporting talent boils down to what we are born with.

People have asked if I was faced with a moral dilemma over whether to include my children in the process, and the answer is I didn't. They took one minute to do the swab and then had their breakfast, so it wasn't intrusive and their genetic make-up, our genetic make-up, isn't any different now we've done the tests. Their world hasn't changed.

Although that doesn't mean I'm not going to tell my children everything I know about their tests.

I'll admit the results were intriguing. I always knew I wasn't a natural marathon runner, but I've discovered I'm slightly more of an endurance athlete than a power athlete - though there's not much in it. My son, however, is more power than endurance.

My VO2 max potential (the maximum volume of oxygen a person can use) is high and my injury risk is also high so, looking back at my time as a gymnast, maybe I would have changed the way I warmed-up, or taken care of my body slightly differently.

I would definitely have had a better diet, but I didn't need a DNA test to tell me that, I just know so much more about nutrition than I did then.

Would it have made a difference? Would I have been more successful? I don't know, but it would have been interesting to make those modifications.

I should point out that these tests aren't solely geared towards elite athletes. They can also be useful for those who want to get the most from exercising and want to know why their bodies don't work well with certain food groups.

The test will reveal whether they're sensitive to saturated fat or carbohydrates. It's about tweaking your diet to suit your genes.

I was told I have a very high sensitivity to carbohydrates and should only have 8% of my calories from refined carbs. My metabolism doesn't process alcohol quickly apparently, which means I'm not at my best once I've had more than one or two glasses of wine. I knew that though, through trial and error.

There's also a certain enzyme missing from my system which means I should eat more cruciferous vegetables, such as cauliflower, cabbage, broccoli, kale and other green leaf veg, which improve my cardiovascular health.

It was fascinating to learn which foods work and don't work well for me. Although, interestingly, the diet I was being advised was best for my genetic make-up is one I have come to eat and enjoy over the years anyway as my body and health feels better for it.

There isn't a broad brush with which I can paint these results because they've looked into a myriad of things: from my body's propensity to absorb nutrients to its ability to heal from tissue injuries and detoxify.

My children seemed to be under the impression they were going to be advised on what specific sport they should do, but that's not how it works. Even if it was I would never tell them to do one sport above another and, at nine years old, they should be enjoying a whole range of sports.

Perhaps if my son was desperate to be the 100m Olympic champion but had none of the sprinter genes it might be kinder to manage his expectations at some point.

In the UK population, 18% have none of the sprinter genes, but luckily for Reuben, who quite fancies himself as a rugby union winger, he does. That doesn't mean he is fast, simply he has the potential to be faster than he is.

My daughter's passion is horse riding, she wants to be a show jumper. As long as I didn't come home and say 'you are allergic to horses' she didn't mind what I said. She seems to be a fairly even mix of both our genes, but who she is and what she will become is down to her.

Yes, if you want to be in the 100m Olympic final you have to have a certain kind of fast-twitch muscle fibre gene, which means you have the potential to run quickly, but if you don't go out on the track, if you don't train, you will never make it.

There could be men and women with very similar genetic make-up to Usain Bolt sitting in an office right now and, either because they didn't have the desire or maybe didn't have the coaching or environment to be a champion, they didn't use nature's gifts. There are so many factors which can contribute to sporting success.

Kenny's success on the rugby field, as a winger for Wasps and Scotland, did not stem entirely from his genetic make-up. He achieved international success because he wanted it badly, trained harder than his peers and was given the chance to play the sport because he came from a rugby-playing family.

Sir Clive Woodward, one of the contributors to the show, believes you can coach everything from attitude to skill, but one of the common factors he has noticed in sporting success, both in his time as England rugby union coach and as director of performance for the British Olympic Association, is how the very best use disappointment and failure. He saw time and again athletes who had been told they wouldn't make it, or had failed on a big stage, learning to use those experiences to drive them on to greatness.

There isn't a gene responsible for that. There are so many factors, so many building blocks, that need to be in place for someone to reach the pinnacle of their chosen sport.

I don't know of any sporting examples, not in this ultra-competitive world, where an athlete has become the best on genetic make-up or raw talent alone. But, on the flip side, why would a top-class athlete not want to learn more about their susceptibility to injuries and how, potentially, to prevent them? If that knowledge adds just 1% to their performance it could be the difference between gold and silver and no true winner would turn their nose up at that.