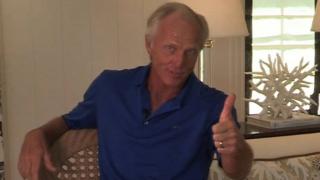 BBC Sport speaks to two-time Open Championship winner Greg Norman regarding his decision to not appear at St Andrews later this year.

It was thought Norman, 60, who won the Claret Jug in 1986 and 1993, would play in Scotland as it is his last year of eligibility (without special dispensation) as former champions are exempt until they are 60.

The Australian "doesn't want to take the space" of younger aspiring golfers and thinks it would be "unfair" to do so due to the fact that he no longer practices the game.