Manchester United will make a £40m bid for Tottenham striker Harry Kane, 21, as they switch their attention to the England international after Real Madrid insist they will not sell Gareth Bale, 25. (Daily Mirror) 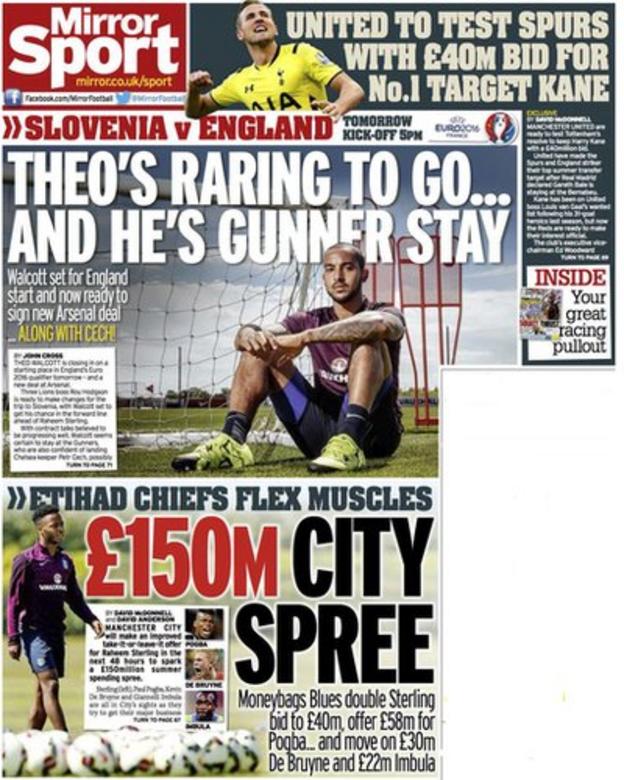 But Tottenham chairman Daniel Levy has told manager Mauricio Pochettino that he has no intention of selling Kane or France international goalkeeper Hugo Lloris, 28. (Daily Telegraph)

Manchester City are prepared to pay a British record transfer fee of £60m to beat Chelsea and Barcelona to the signature of Juventus midfielder Paul Pogba, 22. (Sun - subscription required)

Manchester City also expect a protracted battle for Liverpool forward Raheem Sterling as they prepare to table a £40m offer for the 20-year-old after having an initial £30m bid rejected.(Manchester Evening News)

Alternatively, City make the Reds a 'take it or leave it' offer for Sterling in the next 48 hours as they kick off a £150m spending spree. (Daily Mirror)

Meanwhile, Arsenal are not prepared to get involved in a bidding war with Manchester City for Sterling, especially if Liverpool do not lower their £50m asking price. However, the Gunners could be interested in a player-plus-cash deal. (London Evening Standard)

The Gunners are trying to complete the £11m signing of Chelsea keeper Petr Cech, 33, by the end of next week. (Daily Mail)

England and Arsenal forward Theo Walcott, 26, is set to sign a new contract to extend his stay with the Gunners beyond 2016.(Sun - subscription required) 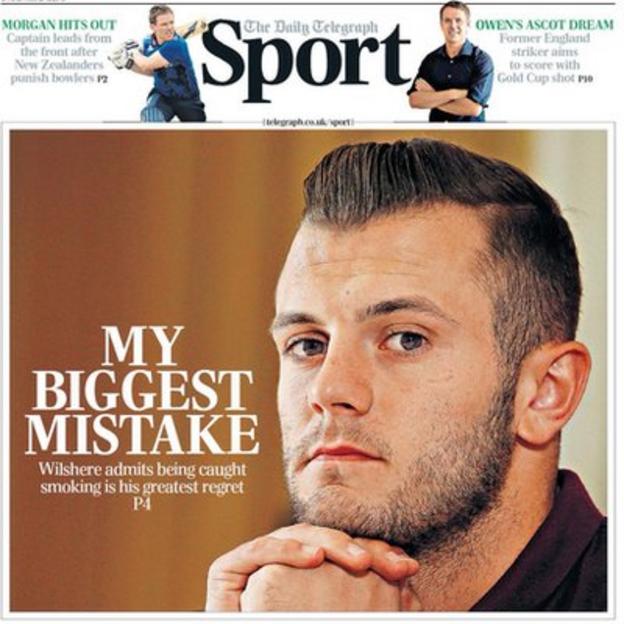 Real Madrid are keen to complete the signing of Manchester United goalkeeper David De Gea in time for the 24-year-old to play on their pre-season tour of Australia, which includes a game against Manchester City on 24 July. (Independent)

Arsenal's England midfielder Jack Wilshere, 23, is not interested in a move to Manchester City just to bolster their number of home-grown players. (Daily Express)

Germany international Ilkay Gundogan, who has one year left on his contract with Borussia Dortmund, has denied agreeing a deal to join Barcelona or Manchester United. The 24-year-old says he will decide on his future after his country's Euro 2016 qualifier against Gibraltar on Saturday. (Manchester Evening News)

Arsenal have been linked with Porto striker Jackson Martinez but the Portuguese club's chairman says the 28-year-old Colombia international has chosen to join AC Milan instead. (Guardian)

Aston Villa midfielder Fabian Delph, 25, believes it would be a "big loss" to the club if 24-year-old striker Christian Benteke leaves. But he added: "If they have a chance to move on and better themselves, I can't tell them not to do that." (Guardian)

Barcelona forward Lionel Messi, 27, insists there is "no rivalry" with Real Madrid star Cristiano Ronaldo, 30, and it is something invented by the media. (Shortlist)

QPR striker Charlie Austin has been linked with a move to Newcastle but he does not appear to be too impressed. He tweeted "Honestly where do people get this stuff from" before quickly deleting it.

Arsenal forward Alexis Sanchez helped hosts Chile to a 2-0 win over Ecuador in the opening game of Copa America before he posted a picture of himself at "home one evening".

Gainsborough Trinity paraded their new signing Marc Newsham with one slight problem - the club's name was spelt wrong, missing off the second 'o' on the scarf the striker was holding for pictures. (Lincolnshire Echo)

According to a survey, Manchester United and Arsenal had their title challenges hampered by two of the worst injury records in the 2014-15 season. (Daily Telegraph)