Manchester City also want Otamendi, while the Argentine is a target of their rivals United. (Daily Mirror)

Watford - who also want Paulinho - have been offered Inter Milan defender Davide Santon, 24, and midfielder Zdravko Kuzmanovic, 27, for £7m but they could negotiate the price. (Evening Standard)

Marseille winger Dimitri Payet is close to completing a move to West Ham, but the French club are angry and say the 28-year-old has reneged on an agreement to see out the remaining two years of his contract. (Times - subscription required)

Benfica and Argentina attacking midfielder Nicolas Gaitan, 27, has a deal agreed to join Manchester United - subject to his club's permission, according to his agent. (Metro)

Manchester United will not sell goalkeeper David De Gea, 24, to Real Madrid unless the Spanish club pay a world-record fee for a goalkeeper. Gianluigi Buffon's reported £33m to Juventus in 2001 remains the record. (Manchester Evening News)

De Gea's house in Manchester, complete with home cinema and sauna, has gone on the market for £2.75m. (Altrincham Today)

Liverpool and Manchester City are interested in Barcelona forward Pedro. The 27-year-old could be allowed to leave for £18m despite signing a new contract this summer. (Talksport, via Mundo Deportivo)

Liverpool are still keen on Aston Villa forward Christian Benteke but will only step up their pursuit of the 24-year-old if Aston Villa are willing to compromise on their £32.5m asking price. (Times - subscription required)

Barcelona star Lionel Messi wants his club to sign Argentina team-mate and Manchester United midfielder Angel Di Maria, 27. However, United want their £59.7m back and would have to pay Real Madrid £10m if they sell him to Barca. (Sun - subscription only)

Di Maria has vowed to fight for his place at Old Trafford in the face of interest from Barca and Paris St-Germain. (Express)

West Ham are closing in on the signing of Barcelona defensive midfielder Alex Song, 27, on a free transfer. He spent last season on loan at Upton Park. (Daily Telegraph)

Manchester City are close to signing 18-year-old Bursaspor striker Enes Unal, who has won a senior cap for Turkey, for about £500,000. (Sun - subscription only)

Paris St-Germain striker Zlatan Ibrahimovic, 33, could play for Sweden at the Rio 2016 Olympics after his country qualified for the tournament. (Guardian)

Sevilla say they have not received any bids for striker Carlos Bacca, and hope that no club meets his buyout clause of £21m. Liverpool and Manchester United have been linked with the 28-year-old, who scored 28 goals last season. (Independent)

Sunderland will push on with their bid to sign Liverpool defender Sebastian Coates, 24, for £4m after Uruguay's exit from the Copa America. (Newcastle Chronicle)

Lazio have persuaded English midfielder Ravel Morrison, 22, to play for them next season, despite interest from QPR. (Talksport, via Il Tempo)

Newcastle midfielder Remy Cabella, 25, does not want to leave the club despite being linked to Marseille, according to his father. (Newcastle Chronicle, via L'Equipe)

Fiorentina have made a £3m bid to sign Chelsea winger Mohamed Salah, 23, and the London club could accept, despite paying £11m for him last year. (Daily Express, via tuttomercatoweb) 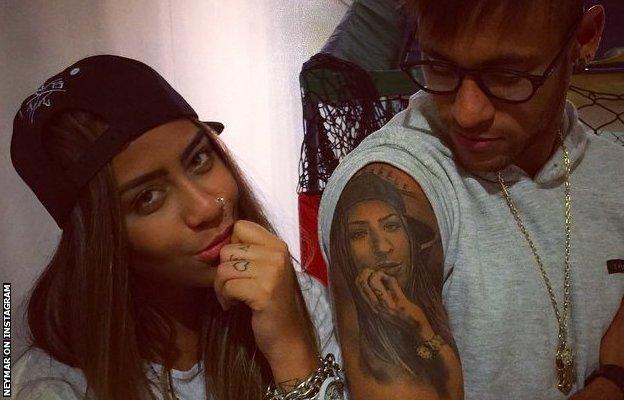 Barcelona forward Neymar, who has left Brazil's Copa America camp after being banned for the tournament, posted a picture of his tattoo of his sister - with his sibling's face next to it for comparison purposes.

Manchester United midfielder Juan Mata asked Twitter followers "where am I?" with a picture of him wearing a comedy-sized sombrero hat.

Former Manchester United midfielder Roy Keane quipped he is glad there were no camera phones while he was winning trophies with the Old Trafford club, saying he would probably be in prison. (Irish Independent)

A colouring book featuring more than 20 football pundits, including a drawing of Des Lynam wearing only underwear, has been launched. (Metro)

A football website has researched which British sports websites or newspapers are the most reliable for football rumours, with BBC Sport coming out on top.(101 Great Goals)