Ferrari driver Kimi Raikkonen is under increasing pressure as he heads to Silverstone for this weekend's British Grand Prix.

The race tracks of Britain are where 15 years ago the Finn cut his motor racing teeth and earned his chance in Formula 1. Now, he comes to the country needing to make an impression for a very different reason - his job is on the line.

This idea will be met with dismay by Raikkonen's many adoring fans. For them, the famously taciturn Finn is some kind of demi-god, a prodigious natural talent made all the more attractive by his anti-establishment persona.

His grumpy team radio messages and willingness to ignore F1's restrictive codes of behaviour have passed into folklore.

On his way to victory for Lotus in Abu Dhabi in 2012, he demanded his race engineer "leave me alone, I know what I'm doing". There is the YouTube video of him falling off the roof of a yacht, apparently drunk. And the time he entered a snowmobile race without Ferrari's permission under the name James Hunt, whom Raikkonen admires, for obvious reasons.

But the reality of Raikkonen's performances on track has been more prosaic recently.

Ferrari are unhappy and have left no-one in any doubt that Raikkonen has to up his game if his contract is to be extended into 2016.

All this is beginning to tell on Raikkonen, it would appear. 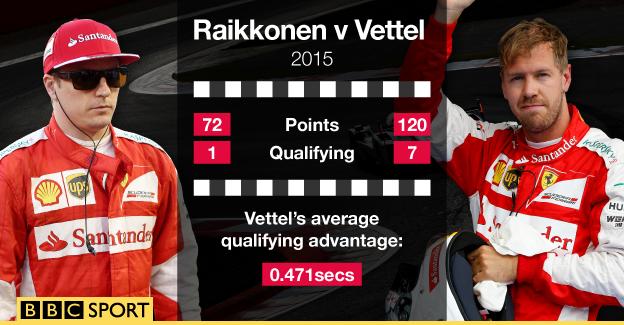 At the last race in Austria he lambasted an Italian journalist to whose article on his future he had taken exception.

Raikkonen finished his discourse with: "Write what you want; I don't really care." When he had spent the previous minute or so suggesting he rather did.

Raikkonen has always preferred to do his talking on the track. The problem with that is Ferrari do not like what they are hearing. And unless the 35-year-old's performances become a lot more eloquent very soon, he will be out of a job.

How did it come to this?

What is remarkable about Raikkonen's situation is that it is no more than two months since he and Ferrari seemed to have fallen in love again.

He came into 2015 with serious questions hanging over him, having been crushed by former team-mate Fernando Alonso last season.

In 19 races, Alonso qualified ahead 16 times, and was an average of 0.529 seconds a lap quicker. Raikkonen scored only 34.2% of the points the Spaniard collected.

Raikkonen - and his fans - blamed this on the way the 2014 Ferrari behaved. The Finn has always been super-sensitive to the way an F1 car handles and needs a car that turns in sharply and quickly to be at his best.

Last year's Ferrari lacked front-end grip, a characteristic Alonso could adapt to, but Raikkonen could not. 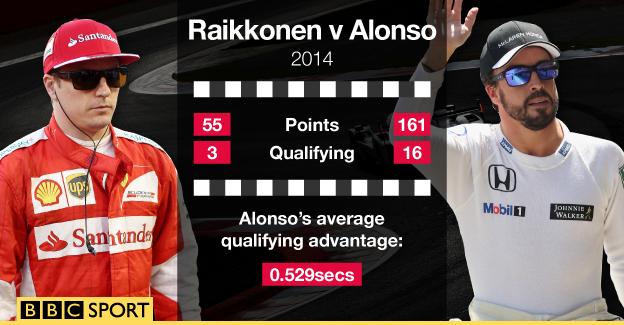 From the very first day's running of the 2015 Ferrari, Raikkonen was happier. It had a 'positive' front end, and he felt it was a car he could work with.

The season started well. He was still lagging behind in qualifying compared to new team-mate Sebastian Vettel but the pace deficit was initially about half that to Alonso and otherwise the two were evenly matched.

After strong performances in the first three grands prix, Raikkonen drove an exceptional race in Bahrain, out-shining Vettel, and finishing second, splitting the Mercedes of Lewis Hamilton and Nico Rosberg.

With Hamilton's brakes failing, had the race been a lap or two longer, Raikkonen would have won.

Back in April and early May, Ferrari's only complaint was a wish for Raikkonen to improve his qualifying to stop him compromising his races by having to make up ground at the start. Even then, it was all relative compared to 2014.

However, following Bahrain, Raikkonen finished fifth, sixth and fourth in Spain, Monaco and Canada, in what is undoubtedly F1's second fastest car.

In Montreal, where Vettel climbed from 18th on the grid to finish fifth, Raikkonen threw away third place to Williams's Valtteri Bottas with a spin on his first lap after his pit stop.

Then came the last race in Austria, so far his nadir. Raikkonen qualified 18th after failing to get in a lap in the wet in the first part of qualifying and then crashed out of the race on the first lap, taking Alonso's McLaren with him, when he simply lost control of the car under acceleration in fifth gear.

It was the sort of mistake that would look bad coming from a novice, let alone someone of Raikkonen's standing, and the reaction of team boss Maurizio Arrivabene in the pits, throwing up his arms in exasperation and uttering what looked suspiciously like an expletive, told you all you needed to know.

Can Raikkonen save his job?

So what exactly does Marchionne mean when he says Raikkonen's future is in his own hands?

It is not just improving his performances on track, although that would be a start, particularly in qualifying.

His average deficit to Vettel has grown to 0.471secs over the season so far, excluding the three races where circumstances mean a comparison is not possible. In eight races, the only time Raikkonen has qualified ahead was when Vettel had an engine problem in Canada.

But Ferrari want more than just results. As one insider puts it: "He needs to show his commitment by working closely with the team and trying to sort out what his current difficulties are."

In two different qualifying sessions, his chances have been hit by what Raikkonen claimed were miscommunications with the pits, but which Ferrari feel were at least partially the driver's fault.

In Malaysia, he failed to get in a lap in the frantic seconds before a huge rain shower hit, and missed the cut-off for the top 10 shoot-out.

When he blamed the team publicly for that, Arrivabene took him aside for a stern conversation to make it clear he did not want to hear that again.

In Austria, where he qualified 18th in slippery conditions, Raikkonen said his failure was due to his engineers not telling him he did not have time for another go, after he had made a mistake on his first lap. Others said, yes, sure, he should have got in a time in the first place.

For his spin in the race in Canada, Raikkonen blamed a post-pit stop engine mode that gave him an unexpected boost in power. The team point out that this mode is standard and that it caused Vettel no trouble.

Then there was the crash in Austria. Even Alonso called it "strange", so bizarre was it to see Raikkonen lose control in that way.

Ferrari have investigated it and can find nothing wrong with the car, no evidence of contact from anyone else, only a sudden loss of grip. Nothing, in other words, to contradict Alonso's assessment that Raikkonen simply lost it, caught by surprise by a combination of the high torque levels of modern F1 engines and the low-grip track surface at the Red Bull Ring.

In Raikkonen's favour, the tracks coming up - particularly Silverstone and Spa in Belgium - are places where he has excelled in the past. He needs to do so more than ever now.

Officially, Ferrari insist no final decision has been on Raikkonen's future.

"There are many, many things to consider and now is too early to tell him something or to decide something," Arrivabene says.

"I could look too defensive or protecting Kimi, but we are not even halfway through the season.

"Try to be in my position, and [imagine the effect of] going to Kimi to say you are out or you are in or whatever. I want the guys to be concentrated on what they are doing and to give the maximum."

This is not, clearly, a ringing endorsement, but it tallies with the official line that Ferrari have plenty of time to make up their minds.

However, sources close to the team say that the decision to drop Raikkonen has effectively already been taken - and only a remarkable turnaround in form over the next three or four races will change their minds.

If Ferrari do let him go, that is likely to be the end of Raikkonen's F1 career, for he has already said he will not go to another team if Ferrari do not want him.

Who would Ferrari replace Raikkonen with? Their number one choice is Red Bull's Daniel Ricciardo. According to Red Bull team principal Christian Horner, Ferrari "had a sniff" at the Australian last year, before plumping for Vettel, but did not go as far as offering any money.

Ricciardo negotiated a new contract with Red Bull over the winter that locks him to the team until 2018, and Horner says they would not consider selling him.

But if Ferrari come calling, Red Bull may have no choice. You can't make a man work where he does not want to and, given the problems with Red Bull's Renault engine at the moment, Ricciardo might well fancy a change. Plus, Ferrari has a lure like no other team, and Ricciardo has Italian heritage.

As a parenthetical point, Ricciardo leaving might actually do Red Bull a favour in the long term, as with two young drivers in him and Daniil Kvyat at the lead team, and two highly promising novices in Carlos Sainz Jr and Max Verstappen in Toro Rosso, there is a bit of a logjam in the Red Bull staircase of talent at the moment.

Ferrari's main concern about Ricciardo is the potentially destabilising effect signing him might have on Vettel. Ricciardo out-shone the four-time champion last year at Red Bull and Ferrari are very happy with Vettel and might prefer not to rock the boat.

If it's not Ricciardo, their second choice is Force India's Nico Hulkenberg.

Their interest in Bottas, which peaked last autumn, has waned, because he is struggling this year to out-pace team-mate Felipe Massa, who was dropped by Ferrari in 2013 after four seasons of being made to look ordinary by Alonso and was evenly matched with Raikkonen when they were team-mates from 2007-9.

They are also facing pressure from their Mexican sponsors to promote Mexican reserve driver Esteban Gutierrez, however unqualified the former Sauber man appears to be for a race seat at F1's biggest and most famous team.