Manchester United will not compromise over their £35m valuation of goalkeeper David De Gea, despite reports in Spain saying the Old Trafford club had lowered their asking price for the 24-year-old to £25m. (Daily Mirror)

Spain international De Gea said a move to Real was no closer as he arrived in Madrid on Thursday, saying he was in the city to "relax". (AS - in Spanish)

Chelsea target Antonio Rudiger, 22, is set to join Wolfsburg as the Stuttgart defender would prefer to stay in Germany, according to his agent. (Kicker via London Evening Standard)

Manchester United will try to tempt Everton to sell them right-back Seamus Coleman, 26, by offering 27-year-old centre-back Jonny Evans as part of any deal. (Daily Star)

Atletico Madrid's 28-year-old midfielder Arda Turan, who has been linked with Chelsea and Manchester United, denied on Twitter he is close to joining Barcelona.

Manchester United have made a bid of about £20m for Southampton midfielder Morgan Schneiderlin, 25. (Manchester Evening News)

Monaco and Sevilla, who are both in the Champions League, want 26-year-old Stoke midfielder Steven Nzonzi, who has a year left on his contract with the Potters. (Daily Mirror)

Leicester City are believed to have made a move for Guus Hiddink, who recently resigned as Netherlands coach, to become their new manager. (Leicester Mercury)

Aston Villa have joined Everton and Southampton in considering a move for highly rated Belgium midfielder Dennis Praet from Anderlecht, with the 21-year-old set to cost in the region of £10m. (Guardian)

Former England right-back Glen Johnson, 30, who is available on a free transfer after he was let go by Liverpool, has turned down a move to Turkish outfit Besiktas. (Sun - subscription required)

Former Real Madrid assistant coach Paul Clement says 29-year-old defender Sergio Ramos - subject of a £28.6m bid by Manchester United - is one of the best players he has ever worked with. (Sky Sports)

Ex-Cardiff City striker Michael Chopra, 31, admits he had a "big ego" when he played for the Bluebirds and says some team-mates failed to perform in the 2010 Championship play-off final. (Wales Online)

Newcastle are one of three Premier League clubs yet to make a summer signing - and manager Steve McClaren has emailed the club's fans asking for patience.(Daily Mail)

Footballers are among those enjoying Wimbledon - and Southampton's French midfielder Morgan Schneiderlin was at SW19 to cheer on compatriot Jo-Wilfried Tsonga.

Tottenham team-mates Harry Kane and Christian Eriksen have proved their relationship is just as strong off the pitch as on it. Kane tweeted a picture of himself and Eriksen with their partners in New York.

Real Madrid striker Karim Benzema posted a picture on Instagram of him with American reality star Kris Jenner at a fashion show. 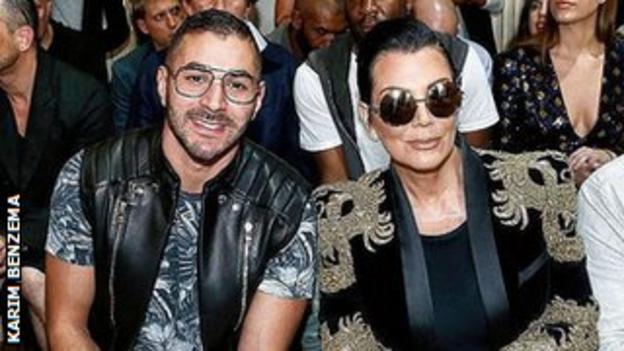 Martunis - a survivor of the Indonesian tsunami in 2004 who was found in a Portugal shirt - has signed for Sporting Lisbon, with the 17-year-old joining the club's under-19 team. (Daily Telegraph)