Newcastle are close to signing Anderlecht striker Aleksandar Mitrovic, 20, for £13.5m and defender Chancel Mbemba, also 20, for about £7.5m.(Daily Mail)

Chelsea manager Jose Mourinho has ruled out a move for 22-year-old Juventus midfielder Paul Pogba and compared the France international to the Eiffel Tower. (Daily Telegraph)

Mourinho is prepared to end 27-year-old winger Juan Cuadrado's unimpressive spell at Chelsea but will not take anything less than the £26.1m they paid for him in January. (London Evening Standard)

Striker Radamel Falcao's desire to prove he can succeed in the Premier League will help the 29-year-old loanee rediscover his best form, says Mourinho. (Guardian)

Turkish side Fenerbahce, who have already signed Robin van Persie and Nani from Manchester United, want Tottenham winger Aaron Lennon, 28, to be their latest buy from the Premier League. (Sun - subscription required)

Arsenal have been linked with a move for £30m-rated Borussia Dortmund striker Pierre-Emerick Aubameyang but the German club have insisted the 26-year-old is not for sale. (Daily Mirror) 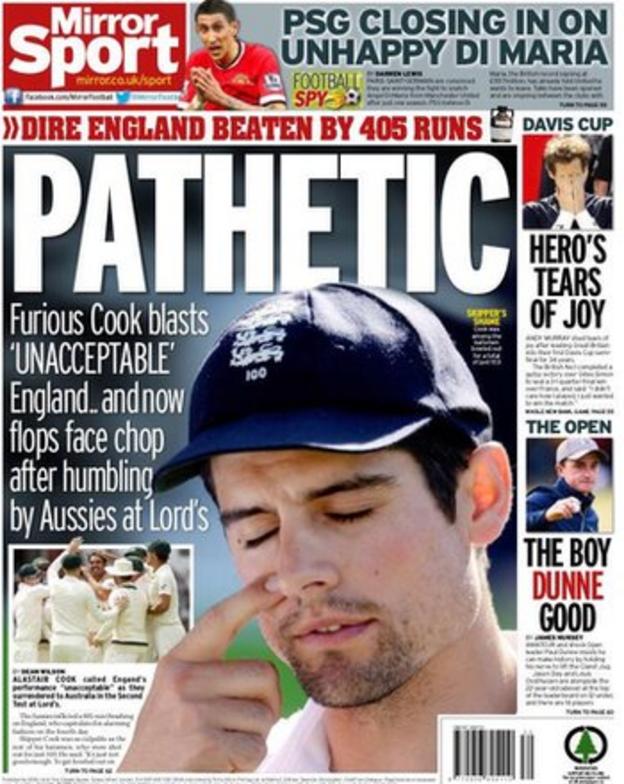 New Manchester City signing Raheem Sterling says he must now make headlines for the right reasons after an acrimonious departure from Liverpool, but admits he would be "quite happy to lie down" on his sofa for the whole day. The 20-year-old insists, however, that he was ill when he missed training at Liverpool shortly before his £49m transfer. (Sun - subscription required)

West Brom boss Tony Pulis wants to agree a new contract with Saido Berahino once the season is under way amid speculation Tottenham are interested in the 21-year-old striker. (Birmingham Mail)

Steve Bruce has admitted he will have to consider his future as Hull manager if his ambitions cannot be matched by the club's hierarchy this season. (Hull Daily Mail)

Manchester United summer signing Memphis Depay took time out of the club's pre-season tour of the United States to try on some American football gear at the Seattle Seahawks.

When asked which Arsenal legend he would like to play for the current team, midfielder Alex Oxlade-Chamberlain was greeted with roars of laughter when he said Nicklas Bendtner. (London Evening Standard)