Manchester United have made discreet enquiries about signing Tottenham striker Harry Kane, 22, and would make a move if given any encouragement. (Daily Mirror)

Manchester City believe they can secure the signing of Wolfsburg midfielder Kevin De Bruyne, 24, before they play his former club Chelsea on Sunday. (Daily Mail)

Chelsea are set to increase their bid to £30m in their attempts to sign England central defender John Stones, 21, from Everton. (Daily Mirror)

Toffees manager Roberto Martinez says Stones is "an incredible professional" who will not "sulk" if the move to Stamford Bridge does not materialise. (Guardian) 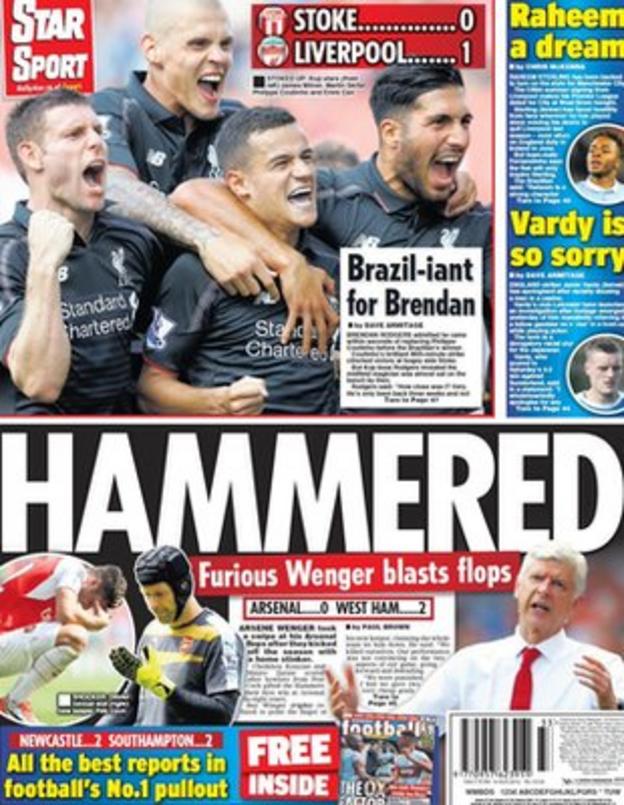 Everton left-back Leighton Baines, 30, could be out for three months following surgery on his ankle injury this week. (Daily Express)

Bournemouth manager Eddie Howe says he intends to stay loyal to the players who were part of his Championship-winning squad last season.(Bournemouth Daily Echo)

Manchester United keeper David De Gea said he was ready to play against Tottenham last Saturday, despite manager Louis van Gaal's claim that the 24-year-old was lacking "focus" because of the intense speculation linking him with a move to Real Madrid. (Daily Mail)

Pellegrini, 61, admits his job will be at risk unless he wins the Premier League title this season. (Sun - subscription required) 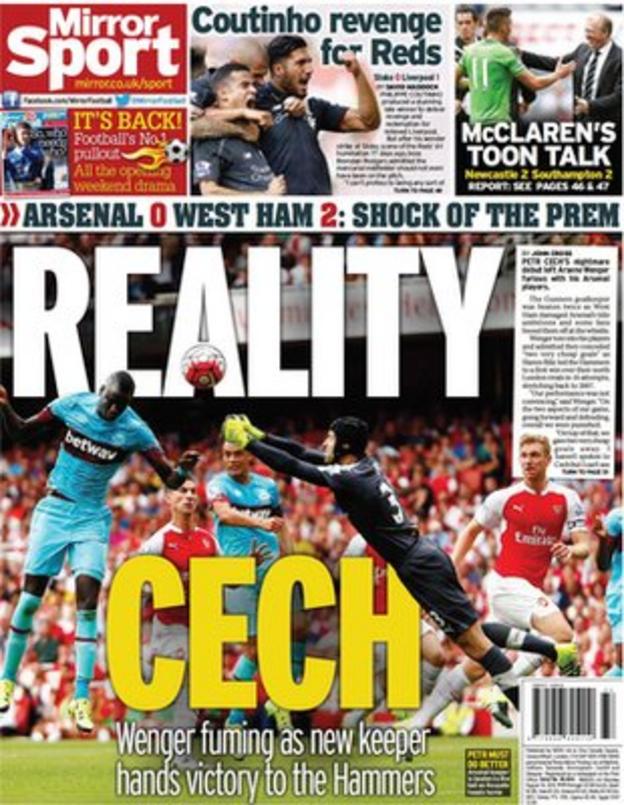 Arsenal manager Arsene Wenger has refused to blame summer signing Petr Cech, 33, for his role in his side's 2-0 defeat by West Ham in their Premier League season opener. (Daily Star)

Arsenal may have lost to West Ham but former Tottenham and QPR manager Harry Redknapp still believes they can win the Premier League title as long as they sign another leading striker. (Daily Telegraph)

West Brom boss Tony Pulis says he is keen to sign more players to bolster his side and has urged Baggies fans to be patient as he tries to bring in reinforcements. (Birmingham Mail)

Swansea manager Garry Monk believes midfielder Jonjo Shelvey can earn an England recall after a change of attitude from the 23-year-old. (Daily Telegraph)

Arsenal keeper Cech had a Premier League debut to forget for the Gunners in their 2-0 defeat by West Ham. He tweeted: "First game like this was not in the script - mistake and no points, but tomorrow is another day to get ready for the next game."

West Ham defender Angelo Ogbonna, 27, posted a picture on social media of his team-mates celebrating on the bus home after the 2-0 win over Arsenal on Sunday.

Schalke striker Franco Di Santo celebrated his side's 5-0 German Cup win over Duisburg by putting a spider down the back of team-mate Leroy Sane. (Metro)

One Aston Villa supporter was so excited by Rudy Gestede's winner against Bournemouth on Saturday he fell out of the stand while celebrating. (Metro)