But Manchester City want to beat their rivals to the signing of the Argentina international, who is valued at £35m. (Mirror)

Midfielder Morgan Schneiderlin, 25, says the experience of playing in League One with Southampton "toughened him up physically and mentally" to play for United.(Manchester Evening News)

Left-back Jose Enrique, 29, wants to "stay and fight" for his place at Liverpool, despite being "alienated" by manager Brendan Rodgers.(Marca via Liverpool Echo)

Roma are interested in signing Liverpool's 25-year-old France defender Mamadou Sakho, who was left out of the opening game against Stoke. (Calciomercato via Daily Express)

Tottenham have put a £15m price tag on 28-year-old Belgium midfielder Mousa Dembele to ward off interest from Sunderland.(Daily Star)

Spurs hope to finalise the signing of Lyon forward Clinton N'Jie this week after agreeing a £10m fee for the 21-year-old Cameroon international.(Telegraph)

N'Jie could be the first of at least three more signings at White Hart Lane as Spurs look for another midfielder and striker.(Daily Star)

The north London side are confident of signing West Bromwich Albion striker Saido Berahino, 22, but are unwilling to meet the £25m asking price.(Daily Mail)

Meanwhile, the Baggies have put strikers Brown Ideye, 26 and Victor Anichebe, 27, up for sale after the arrival of £12m record signing Salomon Rondon, 25.(Express & Star)

Arsenal midfielder Jack Wilshere, 23, could return to the side in weeks rather than months as signs show his left fibula injury is healing faster than expected.(Express)

Midfielder Mathieu Flamini, 31, has been told by Arsenal he can leave the club, but the Frenchman is holding out for a pay-off.(Goal.com)

The Gunners are considering a £22m bid for Sevilla midfielder and Poland international Grzegorz Krychowiak after watching the 25-year-old in action in the Super Cup.(Telegraph)

The Stoke City ticket office has been inundated with requests to purchase season cards and tickets for upcoming matches after the club-record £12m signing of Switzerland winger Xherdan Shaqiri, 23. (Stoke Sentinel)

Bayern Munich legend Stefan Effenberg says Shaqiri has been "badly advised" after moving to the Potters.(Eurosport via Sky)

Manchester City will break their attendance record at the Etihad Stadium when Chelsea visit on Sunday as their expanded South Stand has been granted a safety certificate.(Manchester Evening News)

Swansea manager Garry Monk is surprised Spanish striker Michu, 29, has not yet left the club and says an exit is best for both parties. (South Wales Evening Post)

Everton have agreed a £1m deal for Barnsley's English defender Mason Holgate, 18, who is also a target for Bournemouth.(Guardian)

Leicester City striker David Nugent, 30, is to have a medical at Championship side Middlesbrough after the Foxes accepted a £4m offer. (Leicester Mercury)

Leeds have opened contract talks with 21-year-old full-back Sam Byram, amid rumours of interest from Newcastle.(Mirror)

Former Birmingham Ladies player Amy Laban, 25, has been jailed for two months after faking a personal injury claim to try to win £3,000 in compensation. (Birmingham Mail)

West Ham manager Slaven Bilic believes his side should not get ahead of themselves after Sunday's win over Arsenal.(Sun - subscription required)

Manchester City playmaker David Silva is trying to claim his side's second goal against West Brom. It was awarded to Yaya Toure, despite taking a slight deflection off the Spain international.He tweeted:

Liverpool defender Martin Skrtel said on Instagram he "spent a nice afternoon with the friends"after midfielder Lucas Leiva invited him and other team-mates round for a barbecue. 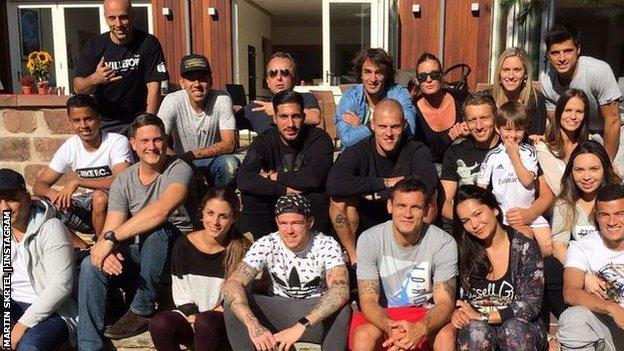 A customer foran online betting companyplaced a £5 bet before kick-off for Portsmouth to beat Derby in the League Cup and stood to win £273,800, but cashed out early meaning he pocketed £50,000.

At £23m, Norwich owners Delia Smith and husband Michael Wynn Jones find themselves bottom of the Premier League table in a list of the division's richest owners.(Mirror)

They haven't won a title since 2004, but Arsenal can claim to be champions of the Premier League when it comes to Twitter. The Gunners have more Twitter followers, 6.1 million, than any other club in England. Chelsea are second with 5.94 million and Manchester United third on 5.78 million.(Sky Sports)