Manchester City are confident they have finally agreed a deal to sign Belgium midfielder Kevin de Bruyne, 24, from Wolfsburg for an initial £54m. (Guardian)

City are set to make an announcement in the next 24 hours to confirm the deal. (Times - subscription)

Chelsea believe they can complete the biggest spending spree in British football by signing Juventus midfielder Paul Pogba, 22, and Everton centre-back John Stones, 21, in the next few days. (Daily Mirror)

Chelsea will have to match Everton boss Roberto Martinez's £45m asking price if they are to secure a deal for defender John Stones. (Sun - subscription required)

West Brom have told Spurs they will not sell England Under-21 international Berahino unless their £25m asking price is met. (Daily Star)

Barcelona will sit down with advisors of Brazil forward Neymar, 23, before the end of the year to discuss a new five-year contract that will see his buyout clause increase to £182m. (Daily Mail)

Juventus have bid for 27-year-old Barcelona midfielder Alex Song, whose move to the Hammers is in doubt. (Sun - subscription required)

Manchester United goalkeeper Victor Valdes, 33, has agreed terms with Turkish club Besiktas and will join on a free transfer having been frozen out at Old Trafford. (Daily Telegraph)

United have told potential suitors for Jonny Evans that they must pay £12m to sign the 27-year-old Northern Ireland defender, who is in the last year of his deal. (Daily Star)

Leicester City are in negotiations with Birmingham City over a deal for 19-year-old winger Demarai Gray and have submitted a bid to activate his £4.7m release clause. (Daily Mail)

Italian striker Mario Balotelli posted a farewell message to Liverpool fans on his Facebook account following the completion of his season-long loan switch to AC Milan. 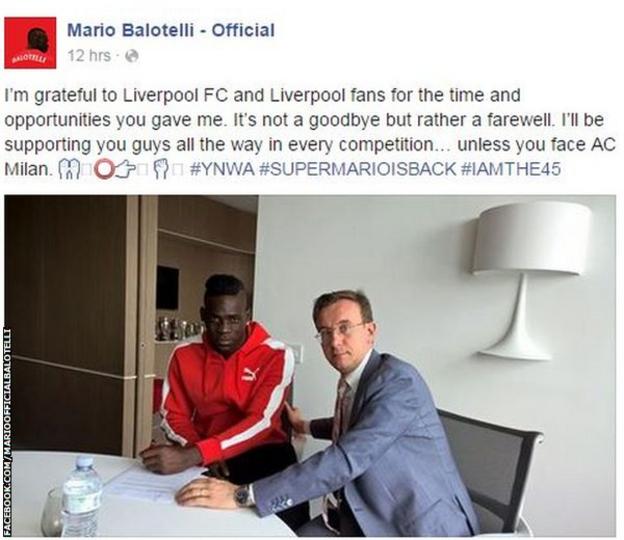 Everton striker Romelu Lukaku has retweeted the thanks he received from a fan, to whom he handed his boot as a memento following the Toffees' 5-3 Capital One Cup win at Barnsley.

Real Madrid and Wales forward Gareth Bale has tweeted a picture of his injured toe, suggesting it was "feeling better" and that he is "looking forward to the weekend", when they face Real Betis.

Mario Balotelli will have a good behaviour clause inserted into his contract with AC Milan, banning extravagant haircuts and clothing and committing him to a healthy lifestyle. (Daily Express)

Arsenal players Mikel Arteta and Theo Walcott were the latest players to have go at the 'dizzy goals' challenge. (London Evening Standard)