Kevin de Bruyne is expected to earn about £200,000 a week when the 24-year-old Belgium midfielder finally completes his move from Wolfsburg to Manchester City. (Telegraph)

Chelsea will pursue signing 22-year-old France midfielder Paul Pogba from Juventus over the remainder of the transfer window. (Independent)

England defender John Stones was targeted by Everton fans at his home in Widnes after handing in a transfer request and is now staying in a hotel. (Sun - subscription required)

West Ham United's England striker Andy Carroll, 26, has missed out on a move to Sevilla in La Liga. (Daily Mail)

Norwich City striker Lewis Grabban, 27, is seeking advice from the Professional Footballers' Association after being suspended by the Premier League club. (Guardian)

Fulham have made a bid for Nottingham Forest defender Michael Mancienne, 27. (Nottingham Post)

Meanwhile, the Black Cats are still waiting to hear whether Napoli's 27-year-old Netherlands midfielder Jonathan de Guzman will move to the Stadium of Light. (Newcastle Chronicle)

Joey Barton has described Burnley boss Sean Dyche as "the most impressive guy I've sat in front of for a long, long time", after becoming the club's seventh summer signing. (Lancashire Telegraph)

Stoke forward Jon Walters, 31, wants to stay with the Potters and extend his contract beyond next summer. A £1.5m offer was Norwich was rejected by Stoke last week. (Stoke Sentinel)

Brighton defender Glen Rea is on the verge of completing a loan move to Southend until the beginning of January. (Argus)

QPR's Brazilian midfielder Sandro is returning to the club after work permit issues were resolved. (GetWestLondon)

Former Liverpool captain Steven Gerrard has revealed he is a fan of pop star Taylor Swift. "Just took my girls to watch Miss Taylor Swift . So talented she put on a incredible show #1989tour little cameos from Selena Gomez and Justin Timberlake. Bonus," wrote the LA Galaxy midfielder on Instagram.

Former Leeds United and Bournemouth left-back Ian Harte has described Cherries boss Eddie Howe as a 'true friend' after announcing the end of his playing career at the age of 37. 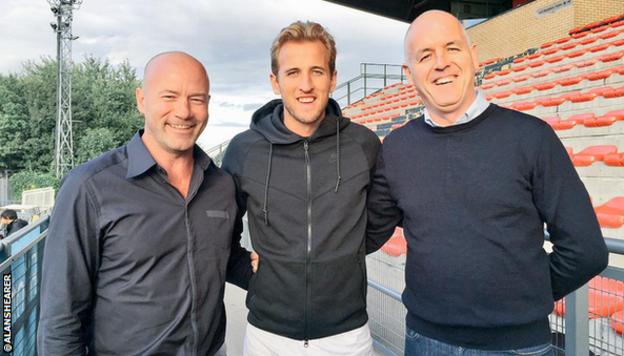 Former Newcastle United and England striker Alan Shearer tweeted a photograph after meeting Tottenham forward Harry Kane and his father Pat. "Had a word about his goal celebration. Looking forward to seeing the next one," wrote Shearer.

Tottenham fans are being offered the chance to swap a Spurs top from the last two seasons with the name of a recently sold player on the back - including Gareth Bale - for this season's new shirt. (London Evening Standard)