Chelsea will have to break the British transfer record and pay £72m to sign France midfielder Paul Pogba, 22, from Juventus, and pay him £82.5m over five years. (Daily Express)

Pogba wants £300,000 a week to join the Stamford Bridge side which would make him the club's highest paid player, beating the £200,000 a week which Eden Hazard earns. (Sun - subscription required)

Chelsea are set to give up their attempt to sign Everton centre-back John Stones, 21, and instead move for Monaco's Tunisian defender Aymen Abdennour, 26, in a deal worth £15m.(Daily Mail)

Chelsea are confident of completing a deal for Guangzhou Evergrande defender Zhang Linpeng, 26, although the China international will be loaned out for the rest of the season. (Daily Telegraph)

Everton have told Paris St-Germain that not even a bid of £50m will persuade them to sell 26-year-old right-back Seamus Coleman. (Daily Star)

Manchester City are set to complete the £55m signing of Kevin de Bruyne over the weekend with the 24-year-old midfielder having sat out German side Wolfsburg's 3-0 win over Schalke on Friday. (Daily Telegraph)

Aston Villa are poised to sign defender Joleon Lescott, 33, from West Brom for £2m next week as the Baggies prepare to complete an £8m deal to bring in 27-year-old Manchester United centre-back Jonny Evans. (Birmingham Mail)

Stoke forward Bojan, 25, says he could have signed for other Premier League clubs after leaving Barcelona but Mark Hughes's side had everything he was looking for. (Times - subscription required)

Manager Steve McClaren has vowed to transform Newcastle into a team of heroes, even though they host Arsenal on Saturday still chasing a first Premier League win of the season. (Daily Express)

Sunderland manager Dick Advocaat has pledged to complete his one-year contract at the Stadium of Light following talks with club owner Ellis Short and the players. (Guardian)

Sunderland are set to miss out on Fenerbahce striker Moussa Sow, 29, to UAE side Al Ahli. (Talksport)

Advocaat will risk the wrath of Sunderland supporters with a move for ex-Newcastle skipper Kevin Nolan, 33, who is a free agent after being released by West Ham.(Daily Mirror)

Stoke have rejected a fresh £2m bid from Norwich City for forward Jonathan Walters, 31, with Potters boss Mark Hughes keen to tie him down to a new contract.(Sky Sports)

Celtic will try to buy Tyler Blackett from Manchester United next summer if a proposed season-long loan move proves to be a success.(Daily Record)

The loan deal for Blackett will go through on Saturday with a view to an eventual £3m move.(Sun - subscription required)

Veteran Hearts goalkeeper Neil Alexander, 37, has told team-mate Juwon Oshaniwa to calm down after the 24-year-old Nigerian defender claimed they could beat Celtic to the Scottish Premiership title. (Scotsman)

The latest images of the stadium development at Anfield show that work is continuing well as construction workers continue their efforts to expand one of the world's most famous football grounds. (Liverpool Echo)

Manchester City striker Wilfried Bony has posted a glum-looking picture of himself on his Instagram account wearing a protective medical boot. The Ivory Coast striker will miss City's clash with Watford because of a gash in his leg, but should be back after the international break. 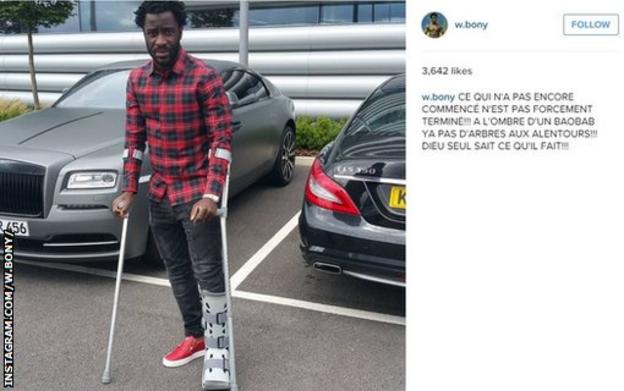 Manchester United new arrival Memphis Depay spent over £1,000 on a matte black wrap for his £120,000 Mercedes at a specialist garage in Oldham and then celebrated by going on a shopping spree in Manchester city centre. (Manchester Evening News)

Oscar winning actress Helen Mirren says she has short footballer's legs like Wayne Rooney and as a result has gotten rid of shorts from her wardrobe. (Daily Mail)