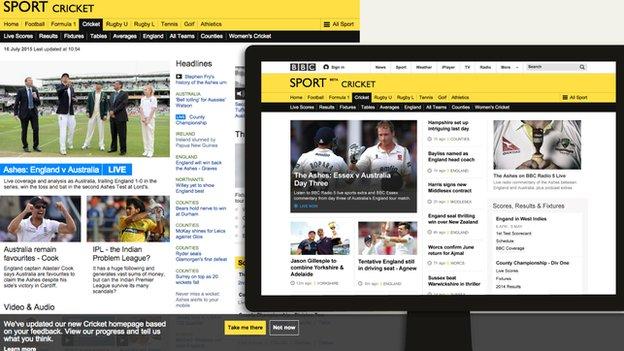 We have launched new versions of our cricket and rugby union homepages to create a more consistent experience whether you are on a computer, tablet or mobile.

We have been running test versions of both pages for the past few months, making minor tweaks along the way based on your feedback to our surveys.

Below we answer the most common questions relating to the new pages.

You can also read more about the process here.

Provide feedback on the new version of the cricket homepage.

Provide feedback on the new version of the rugby union homepage.

Why have you made these changes?

We are in the process of moving our site over to a responsive design - this means it adapts automatically to the screen size of the device it is being shown on.

This move will allow us to provide the same content irrespective of the device a user is looking at the site on, giving visitors the best experience no matter how they are looking at the site. It will also cut down on the extra production effort needed to maintain separate indexes for both the desktop and mobile versions of the site.

We will eventually make the whole site responsive, including all the individual sport homepages, articles and audio and video pages. However, not all indexes will necessarily have exactly the same design - for example, the depth of content on our front page will likely mean there will be some differences between that page and the homepage for a singular sport like cricket or rugby.

We have started using responsive pages for our live events, such as Saturday football commentaries, Test cricket, Sportsday and Wimbledon, so you may well have experienced these changes already.

What improvements are there in the new versions of the cricket and rugby union indexes?

The differences will be most apparent to visitors of the desktop site: the biggest being that, while previously many stories were shown as part of a list of headlines, now more of the content has an accompanying image and stories are more spaced out on the page.

An earlier test version of these new indexes actually took this design further, however in response to audience feedback on that design we launched a version which should feel more familiar to you.

We have also made improvements to how we show audio and videos, while towards the bottom of the page we have added new ways to showcase the best stories both from around the UK and other sports.

No. We will still cover cricket and rugby union in the same way, including comprehensive coverage of the Rugby World Cup.

The new designs will ensure the same content is available on all devices, whereas previously some items only appeared on larger screens.

Which other pages have this design?

Since early 2014, we have been moving parts of the site over to a design which automatically changes layout depending on screen size. All our indexes for 2014's major sports events - the Winter Olympics, World Cup and Commonwealth Games - had an earlier version of these new pages. Our FA Cup and FA Cup video indexes use it, as do the Get Inspired, Sports Personality of the Year, motorsport and curling indexes.

Our aim is to ultimately make the entire sport site responsive, which will mean all pages undergo a degree of redesign.

Will all pages eventually get the new design?

Yes, although the football homepage and sport front page need special consideration due to the amount of content produced for both. The feedback received for these new versions of the cricket and rugby union indexes has also help shape how those pages develop and we will of course offer further chances to feedback as we progress.

Are we making other changes?

We are also looking at the way our individual news stories are laid out, again so that they offer a more consistent experience no matter how you are looking at the site.

At the moment there are some elements of our stories which will only appear when you are on a larger device. Initially our focus will be to ensure users get a more consistent experience, but after that we will look to add new functionality to these pages.

An example of this is the inclusion of our new quizzes, which until recently only worked on the desktop version of the site. Now they work on all browsers and devices.