Charlton are going to give Welsh defender Morgan Fox, 22, a new deal because they fear Manchester United will try to sign him as a replacement for the injured Luke Shaw, 20. (Sunday Mirror)

The Reds are also planning a move for Dinamo Zagreb and Croatia midfielder Marko Rog, having delayed a move for the 20-year-old to let him develop more. (Sun on Sunday - subscription required)

Defender John Terry could soon return for Chelsea after the Blues defence conceded two goals against Newcastle on Saturday. (Mail on Sunday)

West Brom boss Tony Pulis has praised the impact of record buy Salomon Rondon - despite the 26-year-old's disappointing goal return, which has seen him score just once since his move from Zenit St Petersburg. (Daily Star Sunday)

Tottenham manager Mauricio Pochettino says his side must stay grounded after their 4-1 win over Manchester City on Saturday. (Evening Standard)

The Football Association has denied Pochettino's claim that they exhausted forward Harry Kane, 22, by playing him in the European Under-21 Championship in Slovakia this summer. (Mail on Sunday)

Aston Villa midfielder Jack Grealish, 20, has opted to play for England rather than the Republic of Ireland because he believes he has a better chance of playing at major tournaments. (Sunday Express)

Former Manchester United defender Jaap Stam, 43, is keen to manage a club in England having visited Southampton to see their coach and fellow Dutchman Ronald Koeman at work. (Sunday Mirror)

Everton boss Roberto Martinez has dismissed concerns over the goalscoring form of Romelu Lukaku, who has not found the net for a month and is confident the 22-year-old Belgium striker will soon be at his best. (Liverpool Echo)

Watford captain Troy Deeney, 27, has praised his side's spirit after their encouraging start to the Premier League season which has seen them lose just one of their opening six matches and yet to concede a goal at home. (Observer)

Southampton midfielder Steven Davis, 30, believes the current crop of players at St Mary's is the best the club have had in the Premier League since their promotion three seasons ago. (Southern Daily Echo)

Serbia striker Aleksandar Mitrovic, 21, believes his side Newcastle United will climb out of the Premier League danger zone after their vastly improved performance against Chelsea. (Chronicle)

Fifa president Sepp Blatter, 79, and Uefa president Michel Platini, 60, could be suspended by world football's governing body, ruling the latter out of the presidential race at the organisation. (Guardian)

Manchester United boss Louis Van Gaal believes the intensity of the Premier League is behind the struggles of English clubs in the Champions League. (Daily Star Sunday)

Liverpool striker Daniel Sturridge was a happy man on Twitter after scoring twice for the Reds in their victory over Aston Villa as he continues his comeback from an injury that kept him out for much of last season.

Chelsea goalscorer Ramires dedicated his strike, which started the comeback that earned them a draw against Newcastle, to baby son Bruno who was born on Friday. 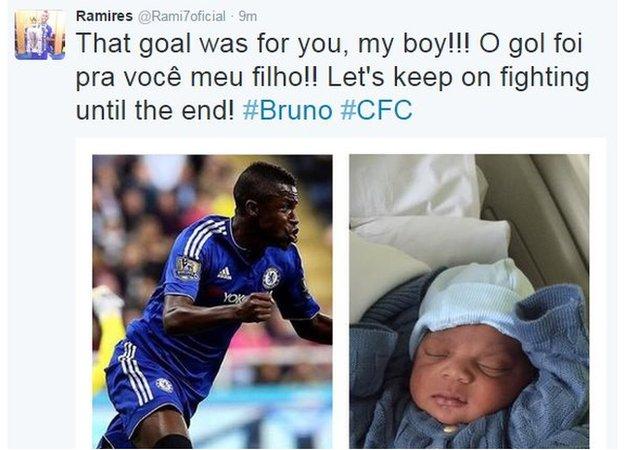 Stoke goalkeeper Jack Butland might have helped his side beat Bournemouth 2-1 on Saturday but he still had a thought for Cherries striker Callum Wilson who was substituted early on with what looked like a serious knee injury. "Great to finally get that win, hopefully now we can kick on!" he tweeted. "Wishing Callum Wilson a speedy recovery, thinking of you mate!"

Fifa president Sepp Blatter has found an unlikely ally as he faces a criminal corruption probe, with his ex-wife Graziella insisting he is innocent and vowing to stand by him. (Sunday Mirror)