Bayern Munich manager Pep Guardiola, whose contract with the German champions runs out next summer, says it is "boring" to stay at one club for too long. (Mirror)

Chelsea's Belgium winger Eden Hazard, 24, has been linked with a move to Real Madrid - and he could be in trouble with Blues boss Jose Mourinho after appearing to 'like' a post on Instagram suggesting he could move to the Spanish club. (Sun - subscription required)

Aston Villa may consider a move for 36-year-old Swansea boss Garry Monk if they decide to replace Tim Sherwood, 46, as manager. (Telegraph)

Villa's 33-year-old former England midfielder Joe Cole, who has joined Coventry on loan, believes Sherwood can hold onto his job and keep the club in the Premier League.(Star)

The agent of Arsenal target Lorenzo Insigne says the 24-year-old Italy striker wants to stay at Napoli "for life". (Radio Crc, via Express)

Sunderland manager Sam Allardyce will not move for ex-West Ham and Newcastle midfielder Kevin Nolan, 33, as he would prefer to sign a striker. (Telegraph)

Former Everton and Manchester United manager David Moyes, 52, wants to stay in charge at Real Sociedad. The Scot has been linked with Aston Villa. (Star)

Former AC Milan, Chelsea and Real Madrid boss Carlo Ancelotti, 56, says he was not approached by Liverpool before the club appointed Jurgen Klopp as their new manager. (Goal)

Klopp believes he has the "complete footballer" at his disposal - 29-year-old England midfielder James Milner. (Star)

Chelsea manager Jose Mourinho still believes his side can win the Champions League, Premier League, FA Cup and League Cup this season, despite a poor start to their campaign. (Express)

Tottenham's Belgium midfielder Mousa Dembele, 28, wants talks with Spurs boss Mauricio Pochettino over his role in the team as he competes with Eric Dier, 21, and Dele Alli, 19, for a place.(Mail)

Leeds owner Massimo Cellino plans to stay on at Elland Road despite his suspension from running the club by the Football League.(Mirror)

Former Manchester United captain Rio Ferdinand was told off by a guard for putting his feet on the seat on a train.

Tottenham winger Nacer Chadli said he would "come back stronger" after potentially suffering ankle ligament damage in the 0-0 draw with Liverpool on Saturday.

After scoring Stoke's winner against Swansea on Monday, Bojan, tweeted a picture along with the message: "Incredible performance from everyone! 3 points & 3 wins in a row. Come on." 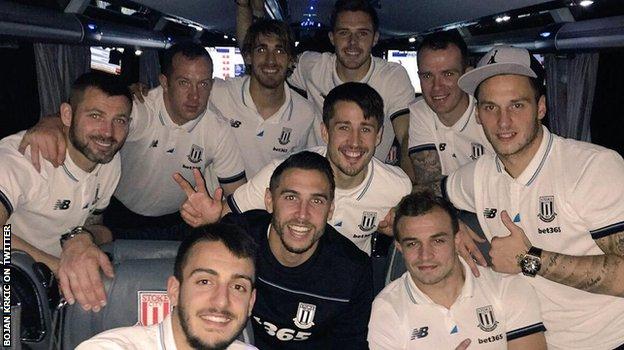