Chelsea, Manchester United and Manchester City have all made informal approaches for Barcelona superstar Lionel Messi, 28, who is growing increasingly angry at ongoing issues with the Spanish tax authorities. (the Sun - subscription required)

Everton have opened contract talks with 21-year-old central defender John Stones as Chelsea prepare to make a fresh approach for the England international in the January transfer window. (Daily Mirror)

The Toffees will delay negotiations with Stones, who has three and a half years remaining on his contract, as they want him to concentrate on his performances. (Daily Express)

Tottenham are monitoring the form of Eden Hazard's brother Thorgan, 22. The attacking midfielder has been the highlight of Borussia Monchengladbach's Champions League campaign. (Daily Mail)

Swansea boss Garry Monk says the journalist who wrote he had missed training on Wednesday amid speculation over the security of his job "should take a day off". (South Wales Evening Post) 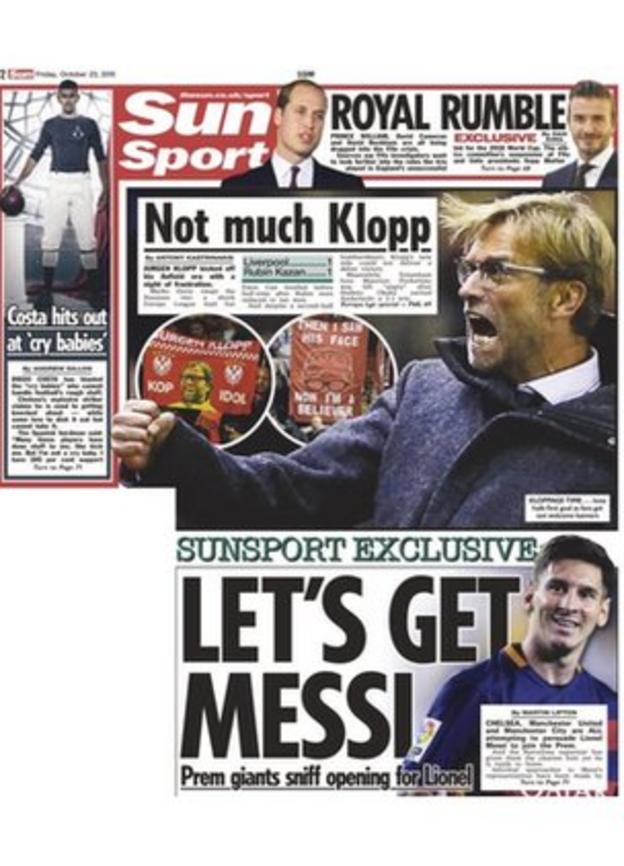 Liverpool boss Jurgen Klopp may go back to former club Borussia Dortmund to try to sign 27-year-old midfielder Nuri Sahin, who had a spell on loan at Anfield from Real Madrid in 2012. (Calciomercato via Metro)

Fiorentina are interested in Monaco's Colombian striker Radamel Falcao, 29, who has struggled to make an impact during his loan spell at Chelsea. (Daily Mirror)

Crystal Palace manager Alan Pardew wants a review system in place for referees to analyse incidents after games and feels they should have better training and facilities. (Croydon Advertiser)

On-loan Crystal Palace striker Patrick Bamford, 22, could be heading back to parent club Chelsea who are growing increasingly concerned over his lack of first-team football. (Evening Standard)

Newcastle head coach Steve McClaren will encourage Aleksandar Mitrovic to play "on the edge" against Sunderland, urging the 21-year-old striker to be aggressive but "smart". (Newcastle Chronicle)

Stoke winger Marko Arnautovic, 26, feels he needs to show "people all his qualities" after failing to produce his best form for the club in 2013. (Stoke Sentinel)

Porto's highly rated 18-year-old Ruben Neves is being monitored by several of the Premier League's leading clubs, but the Portuguese club's president says the midfielder is not for sale. (Daily Mail)

Athletic Bilbao have told Chelsea and Manchester United they will have to pay £35m if they want 21-year-old defender Aymeric Laporte. (El Correo via Express)

Brighton are looking to step up their interest in signing Boca Juniors striker Jonathan Calleri, 22, but face competition from Serie A side Inter Milan. (The Argus)

West Brom midfielder Darren Fletcher, 31, says he was told he may never play again after being diagnosed with ulcerative colitis several years ago. (Daily Telegraph)

Chelsea midfielder Nemanja Matic says manager Jose Mourinho "can always count on me" despite the 27-year-old being substituted just 28 minutes after coming on against Southampton. (Daily Star)

Bournemouth defender Charlie Daniels, 29, says Martin Jol and Gareth Bale played a part in shaping his future when he was with the pair at Tottenham. (Bournemouth Echo)

Heather Rabbatts could be removed from the Football Association board following her public support for former Chelsea doctor Eva Carneiro. (Daily Mail)

The head of the German Football Association, Wolfgang Niersbach, says the country's 2006 World Cup bid was won by "fair means", although he struggled to answer some questions put to him on the issue. (Guardian)

West Brom's players took part in the 25-year anniversary of the club's foundation by joining in a showcase presentation of its community work, which included striker Saido Berahino playing blindfolded. 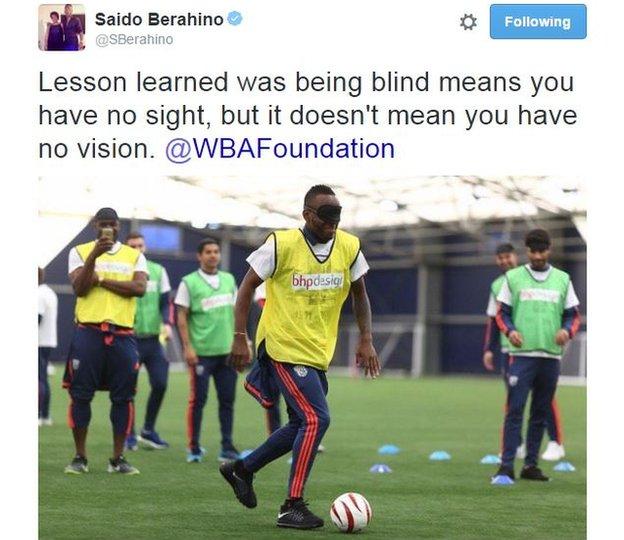 Liverpool boss Jurgen Klopp wore a suit instead of a tracksuit and trainers for his first home game in charge, and his choice of attire was a hot topic of discussion on Twitter as some appreciated the effort, while others would have preferred a more casual approach. (Metro)

Real Madrid forward Cristiano Ronaldo, 30, is more valuable than 28-year-old Barcelona rival Lionel Messi, according to a Forbes list of the most valuable athlete brands in the world. (Daily Telegraph)