Chelsea will sack under-pressure manager Jose Mourinho, 52, if there is evidence of the club's fans turning against him. (Daily Star)

Mourinho will be permitted to work for another English club if he is sacked under the terms of his contract at Stamford Bridge. (Times - subscription required)

Should Mourinho be sacked, former Chelsea manager Carlo Ancelotti and the club's former midfielder Claude Makelele have been lined up as a possible management team. (Daily Mail)

Former Manchester City manager Roberto Mancini, 50, is a candidate to replace Mourinho if the Portuguese is sacked. (Corriere della Sera)

Everton midfielder Kevin Mirallas, 28, could leave the club in January as he is concerned his lack of first-team action could hinder his hopes of going to Euro 2016 with Belgium. (Daily Express)

Aston Villa owner Randy Lerner says the club, currently bottom of the Premier League, are "way behind" and must harvest their talent rather than "buckle under pressure and criticism". (Times - subscription required)

Newcastle winger Rolando Aarons, 19, injured his right foot in training on Friday and is expected to be ruled out for a number of weeks. (Chronicle)

Chelsea and Manchester City have been given fresh hope in their pursuit of France midfielder Paul Pogba, 22, with the player's agent confirming a deal has not been agreed with Barcelona. (Daily Express)

Watford are considering a short-term deal for Togo striker Emmanuel Adebayor, 31, in January. He is a free agent having been released by Tottenham by mutual consent in September. (Daily Mirror)

Liverpool have placed Barcelona forward Cristian Tello, 24, on their list of transfer targets as it looks like he wants to leave the club when his loan spell at Porto ends. (Metro)

Former Arsenal striker Ian Wright says the player who allegedly said he would rather lose at Chelsea than win for Jose Mourinho "has to go". (Sun)

Real Madrid forward Cristiano Ronaldo, 30, has put other clubs on alert after saying he could finish his career away from Los Blancos. (Guardian)

Manchester City are lining up an £8m bid for Atletico Madrid and Argentina forward Angel Correa. The Spanish club say they have already turned down an enquiry from City but are expecting them to come back for the 20-year-old. (Daily Mirror)

Manchester United and West Ham have been put on alert after Brazil and Corinthians striker Alexandre Pato hinted he is interested in a move to England. The former AC Milan forward, 26, hopes to move to Spain or England. (Radio Globo)

Twitter shared a collective giggle at referee Mike Dean because when Tottenham opened the scoring in their win over Aston Villa the official looked as if he was celebrating a goal. 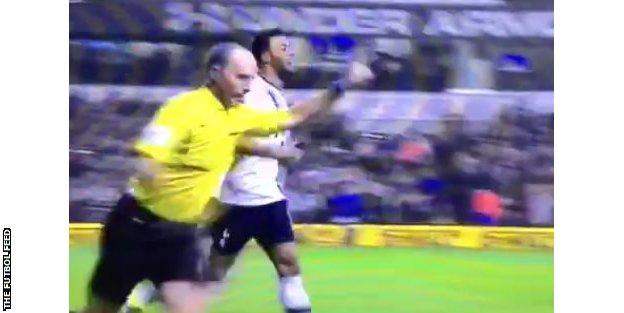 Manchester United striker Wayne Rooney, 30, was declared "missing" by police on Thursday in a post on the Greater Manchester Police Twitter account. The tweet was later deleted as some fans reacted angrily. (Manchester Evening News)

Before the Champions League group fixture in Spain, Manchester City winger Jesus Navas, 29, highlighted the fact he will face his old club - Sevilla - tweeting: "Already in Sevilla, ready for a day that will be full of mixed feelings."

Everton Under-18s midfielder Liam Walsh, 17, has drawn plaudits for an audacious strike from the halfway line in their win over Derby County. (Liverpool Echo)