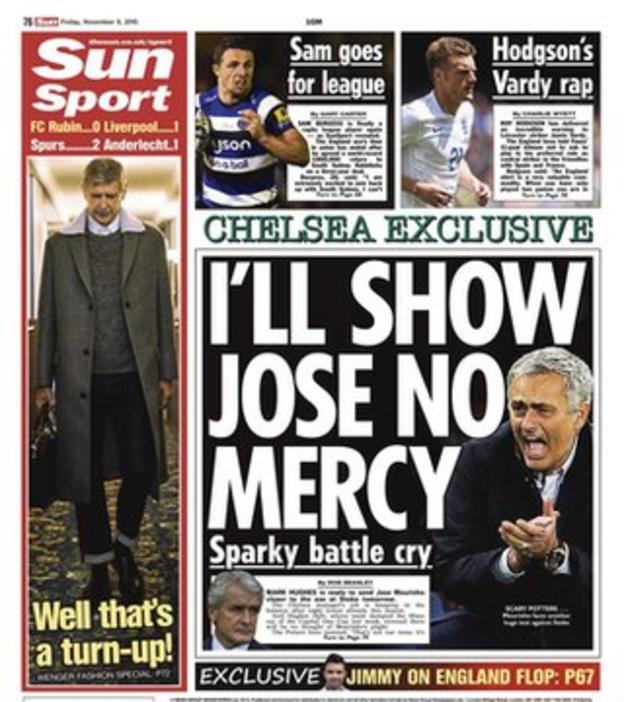 Watford manager Quique Sanchez Flores will not rule out a move for 31-year-old former Tottenham striker Emmanuel Adebayor, who is a free agent. (Guardian)

Leicester manager Claudio Ranieri has told playmaker Riyad Mahrez, 24, he should carry on "growing up" as a Foxes player before moving on to the "highest level". Mahrez has been linked with a move to Manchester United. (Daily Star)

Arsenal striker Joel Campbell's agent says the 23-year-old Costa Rica international, who was linked with a move away during the summer, wants to stay at Arsenal. (Metro)

England manager Roy Hodgson has told Leicester striker Jamie Vardy, 28, he should be "happy" to be in his squad, let alone demand in which position he wants to play. (Daily Mirror)

Chelsea manager Jose Mourinho will be able to communicate with his backroom staff from the team hotel while he serves a stadium ban during Saturday's Premier League match against Stoke. (Daily Mail) 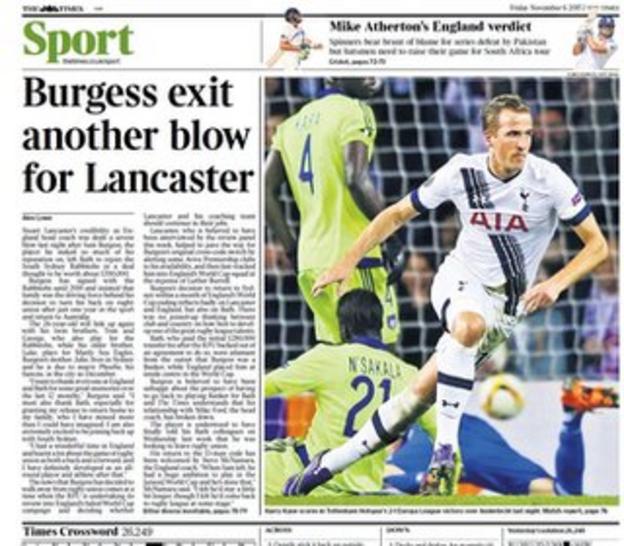 New Aston Villa manager Remi Garde, 49, says he rejected an offer from another Premier League club before moving to Villa Park but refused to confirm whether it was Newcastle. (Independent)

Managerless QPR could reappoint former boss Ian Holloway, 52, who has been without a club since being sacked by Millwall in March. (GetWestLondon)

Liverpool manager Jurgen Klopp is set to several loan players, including Coventry winger Ryan Kent, 18, for an assessment before the international break.(Coventry Telegraph)

Liam Bridcutt's potential loan move to Leeds United is in the balance after Sunderland manager Sam Allardyce said the deal for the 26-year-old midfielder was "confused - like Leeds".(Yorkshire Evening Post)

Italy Under-21 centre-half Daniele Rugani could leave Juventus on loan in January. The 21-year-old has been linked with Arsenal.(Talksport)

Arsenal keeper Petr Cech, 33, says the Gunners need to toughen up following their 5-1 thrashing by Bayern Munich in the Champions League. (Daily Star)

Former Manchester United midfielder Roy Keane, 44, has labelled the club's current 30-year-old winger Ashley Young a "disgrace" and claimed "if he's a Manchester United player, I'm a Chinaman". Keane was giving his view as an ITV pundit on an alleged dive by Young in a Champions League game against CSKA Moscow. (ITV Football)

Former England striker and Match of the Day presenter Gary Lineker spots a familiar-looking face, writing: "Popped out for a loaf and spotted Diego Costa doing a bit of moonlighting."

Former England striker Peter Crouch was avidly following the Class of 92 documentary on the BBC, quipping on Twitter: "It's been a problem for me throughout my career. Choosing modelling or football #ClassOf92"

Real Madrid forward Cristiano Ronaldo tweeted a short clip from his film, to be released on Monday, showing him dancing at his birthday party in a silver top hat.

Arsenal manager Arsene Wenger donned some smart clothes for an interview with French sports newspaper L'Equipe's magazine Sport and Style as he claimed "my constant battle in this job is to bring out the beauty in man". (Sun - subscription required)

Wojciech Szczesny, the 25-year-old keeper who is on loan at Roma from Arsenal, is an "uncontrollable lunatic", according to former Juventus keeper Stefano Tacconi. (Gazzetta TV)