As a result of the attacks, senior British officers are to step up their fan-safety strategy. (The Independent)

Lionel Messi is open to leaving Barcelona for a move to the Premier League, with Arsenal his preferred destination. But the 28-year-old forward wants £600,000-a-week. (Daily Star)

Arsenal playmaker Mesut Ozil, 27, will be rewarded for his good form this season by being offered a new deal by the Gunners. (Daily Mirror)

Real Madrid forward Cristiano Ronaldo, 30, could be playing in his final home El Clasico against Barcelona on Saturday, according to sources close to the Bernabeu club.(Daily Mail)

Portugal international Ronaldo will be allowed to leave Real Madrid if they can recoup the £80m they paid Manchester United to sign him. (Sun)

Red Star Belgrade midfielder Marko Grujic, 19, says he has been told by Serbian compatriot and Chelsea midfielder Nemanja Matic, 27, that the Blues want to sign him. (Daily Express)

Fulham striker Moussa Dembele, 19, says it is "flattering" to be linked with a move to the Premier League but he is concentrating on getting the Cottagers promoted into the top flight. (Daily Express)

Juventus striker Alvaro Morata has been linked with a move back to Real Madrid but the 23-year-old insists he has no intention of moving from the Serie A side. (Marca)

Arsenal keeper Petr Cech says it is "hard to believe" the plight his former club Chelsea are in as they lie 16th in the Premier League in defence of their title. (Tyden via London Evening Standard)

Tottenham striker Harry Kane, 22, says he was "small for my age" when he was released by Arsenal at the age of nine before joining Spurs. (Daily Telegraph)

Partick Thistle last night said they will support their 25-year-old striker Mathias Pogba, brother of France and Juventus player Paul, after he was caught up in the Paris terror attacks. (Daily Record)

West Brom defender James Chester admits he fears he will not be selected by Wales for Euro 2016 because he is not playing regularly for his club. (Wales Online)

Former Liverpool striker Ian Rush was no stranger to raising the odd trophy in his Reds career and he was at it again after Liverpool beat Manchester United 2-0 in a legends match in Singapore, with Luis Garcia and Dietmar Hamann getting the goals. 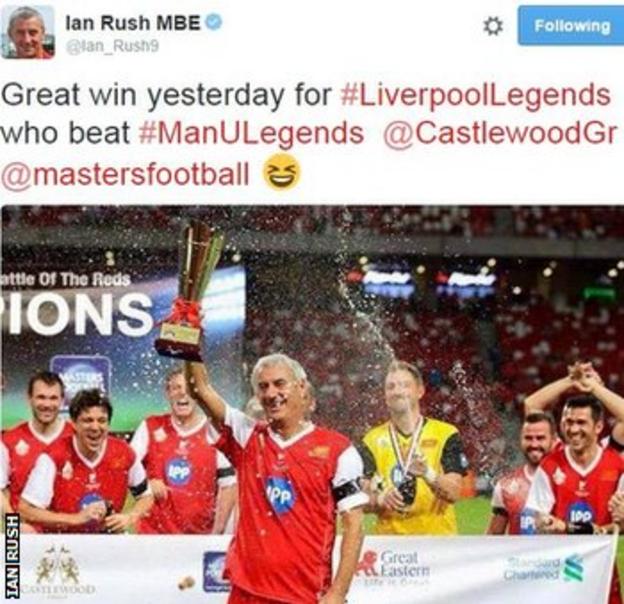 Everton left-back Leighton Baines, 30, does not seem to be too worried by his current situation at the club. "I am older. I have had two surgeries. I have one more year left [on my contract]. It's quite exciting to be honest," he said. (Daily Telegraph)