Manchester United plan to take a back seat when Pep Guardiola's contract with Bayern Munich expires at the end of the season, leaving the way open for Manchester City to pursue the 44-year-old former Barcelona coach at the expense of Manuel Pellegrini. (Guardian)

Manchester United boss Louis van Gaal, 64, is set to be handed £200m to spend next summer as the Old Trafford club have no plans to move for Guardiola. (the Sun)

And the Red Devils will buy at least one of the world's top players, drawing up a wish-list that includes Real Madrid duo Cristiano Ronaldo and Gareth Bale and Barcelona's Neymar. (Sunday Mirror)

Chelsea have made 24-year-old striker Antoine Griezmann their number one target for the January transfer window, with the France international valued at £25m by his club Atletico Madrid. (Sunday Mirror)

Former Manchester United boss David Moyes says Neville has taken a risk by becoming the Valencia boss, but says the former England defender won't be judged on whether he speaks Spanish. (Sunday Telegraph)

Moyes, 52, will be offered a return to the Premier League as replacement for beleaguered Swansea City boss Garry Monk. (Sunday Mirror)

Newcastle are mulling over a January move for QPR winger Matt Phillips, 24, while Tottenham wide man Andros Townsend, 24, is also on the Magpies' radar. (The Sun)

Striker Gerard Deulofeu, 21, wants to stay at Everton beyond this season because of the positive influence manager Roberto Martinez is having on his career.(Mail on Sunday)

Arsenal are in contention to sign Paris St-Germain winger Lucas Moura, 23, and could offer in excess of £30m for the Brazilian, who has also been linked with Manchester United. (BuzzSport via Metro)

Former Liverpool midfielder Igor Biscan has been found guilty of attacking a taxi driver in his hometown of Zagreb, Croatia by butting him in the face. (Liverpool Echo)

Everton and Republic of Ireland defender Seamus Coleman says he would be more than happy to face England at next year's European Championship finals in France. (Daily Star Sunday)

Manchester United manager Louis van Gaal says his team are not ready to win the Champions League even if they manage to beat Wolfsburg this week to secure a place in the knockout stages. (Sunday Telegraph)

West Ham's Mauro Zarate missed a golden opportunity in the Hammers' scoreless draw at Old Trafford against Manchester United and later expressed his regret on Twitter.

But there were happy faces all round for the Leicester fans and players after they beat Swansea 3-0 to go top of the Premier League final, with midfielder Gokhan Inler posting a picture on Twitter of the journey back home. 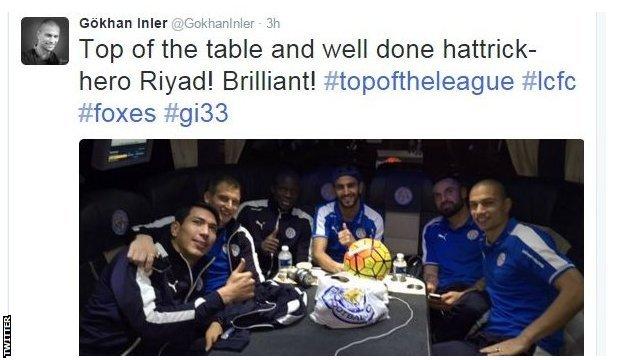 Liverpool manager Jurgen Klopp has revealed he has received a message of congratulations from former Manchester United boss Sir Alex Ferguson after his impressive start to life at Anfield. (Liverpool Echo)