After the sacking of Jose Mourinho, Guus Hiddink, 69, is set for a second short-term stint in charge of Chelsea, but Atletico Madrid boss Diego Simeone is the Blues' long-term target. (Telegraph)

Simeone, 45, is yet to be convinced a move to Stamford Bridge is right for him. (Mail)

Dutchman Hiddink has been lined up as Mourinho's replacement until the end of the season. (GetWestLondon)

A deal for Bayern Munich coach Pep Guardiola, 44, to become Chelsea boss in the summer is 90% done. (Express)

Harry Redknapp, who replaced Ramos as Spurs manager when they had only two points from eight games in 2008, joked the Spaniard would be a "fantastic candidate" for the Chelsea job. (BBC Radio 5 live clip)

His penultimate day as Blues boss was marred by a shoving match after a tackle from Cesc Fabregas during a training session involving players from both the first team and academy. (Times - subscription required)

BBC reporter Garry Richardson claims Mourinho said he had a "couple of bad apples" in his team who were causing him "lots of problems". (BBC Radio 5 live clip)

Former Liverpool boss Graeme Souness believes Mourinho's problems stemmed from falling out with some of the "main men" in the dressing room.(Sky Sports)

Former Chelsea forward Tony Cascarino says there is one "obvious" candidate to take the Chelsea job... Alan Pardew. (The Times)

Real Madrid forward Cristiano Ronaldo, 30, who has been linked with Paris St-Germain, said he likes Madrid more than Paris, but that might "change". (Marca via Visao)

Bournemouth are preparing to bid for Hull defender Curtis Davies in January. The 30-year-old centre-back's contract expires at the end of the season and the Championship club may be willing to let him go to avoid losing him on a free transfer in the summer. (Mirror)

Brighton's fear that Manchester United striker James Wilson, 20, will be recalled from his loan spell have been played down by United reserve-team coach Warren Joyce. (The Argus)

Former Argentina coach Marcelo Bielsa, 60, is the favourite to replace Garry Monk at Swansea, but the club's players and staff have not been told of any developments in the build-up to Sunday's match with West Ham. (South Wales Evening Post)

On-loan Hull striker Chuba Akpom, 20, has apologised after throwing his gloves at the bench when he was substituted against Reading. (Hull Daily Mail)

Arsenal's former Chelsea goalkeeper Petr Cech made no mention of a certain former manager of his, instead commenting on what he did on Wednesday night. 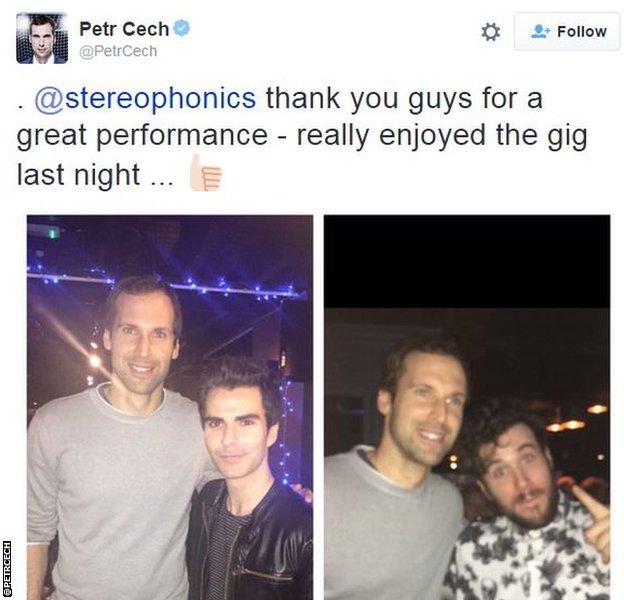 Chelsea midfielder Cesc Fabregas wrote a tribute to Mourinho: "Thank you for all you have done for me. I owe you a lot and we will all miss you. Good luck in the future."

Stoke playmaker Bojan Krkic on Twitter: "Today we visited the kids at the Royal Stoke Children's ward. It's always a very levelling experience."

Tottenham midfielder Andros Townsend writes: "Finally the darts is back! Way too tough to call a winner this year though!"

Manchester United teenager Cameron Borthwick-Jackson has broken a club record, by having the longest name of any player to appear for the Red Devils. (Metro)