Chelsea owner Roman Abramovich visited the club's Cobham training base to outline his vision for the future, the reasons for sacking Jose Mourinho and confirmed to the squad that Guus Hiddink would be the caretaker manager. (Daily Telegraph)

Abramovich told Chelsea's players he did not want to sack 52-year-old Mourinho, who was snubbed by some players when he went back to the club's training ground to pick up the rest of his personal belongings. (Daily Mail) 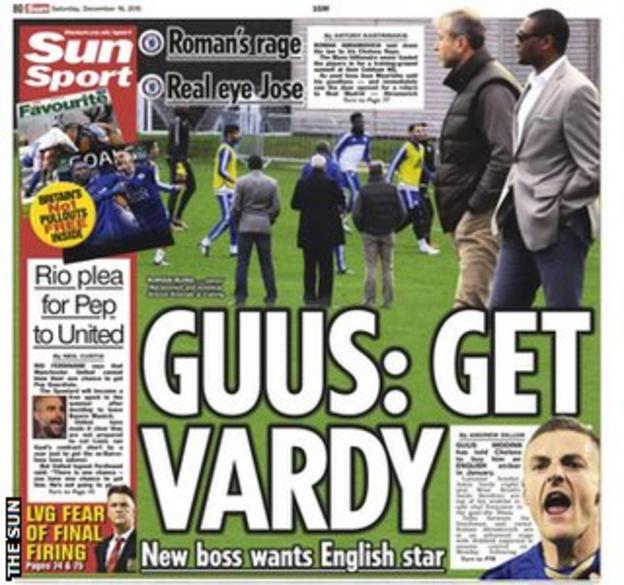 The 49-year-old Russian also told the Stamford Bridge squad they need to improve and take responsibility for rediscovering their form. (Guardian)

Abramovich will now make a move to appoint 44-year-old Bayern Munich boss Pep Guardiola, who has also been linked with Manchester City and Manchester United, as the Chelsea manager next summer. (Daily Express)

Guus Hiddink, 69, has revealed he still needs some more convincing to become Chelsea's caretaker manager for the rest of the season. (London Evening Standard)

Former Chelsea striker Mateja Kezman says Hiddink has told him he will be the man to replace Mourinho at Stamford Bridge. (Talksport)

Hiddink has told Chelsea to buy him an English striker in January, with Leicester forward Jamie Vardy, 28 and West Brom's Saido Berahino, 22, top of his list. (Sun)

Atletico Madrid's Argentine manager Diego Simeone is open to joining Chelsea next season and believes the language barrier would not pose him a major problem. The 45-year-old has a £15m release clause in his contract. (Daily Mail)

Former Manchester United centre-back Rio Ferdinand has urged the Old Trafford club to get the "best manager on the planet" in Pep Guardiola, who could leave Bayern Munich. (Guardian)

However, Jose Mourinho is keen on becoming the next Manchester United manager and the initial steps to making that happen have taken place. (ESPN)

Manchester United manager Louis van Gaal, 64, does not want to end his career with the sack in what is expected to be his last managerial job in the game. (Daily Express)

Van Gaal is hoping to lure Real Madrid forward James Rodriguez, 24, to Old Trafford, according to reports in Spain.(Fichajes.net via Metro)

Radamel Falcao, 29, could leave Chelsea and return to Monaco in January - and then move to Major League Soccer next summer.(Daily Mirror)

England midfielder Jonjo Shelvey is set to leave Swansea after the club's owner Huw Jenkins questioned his commitment to the club.(Sun) 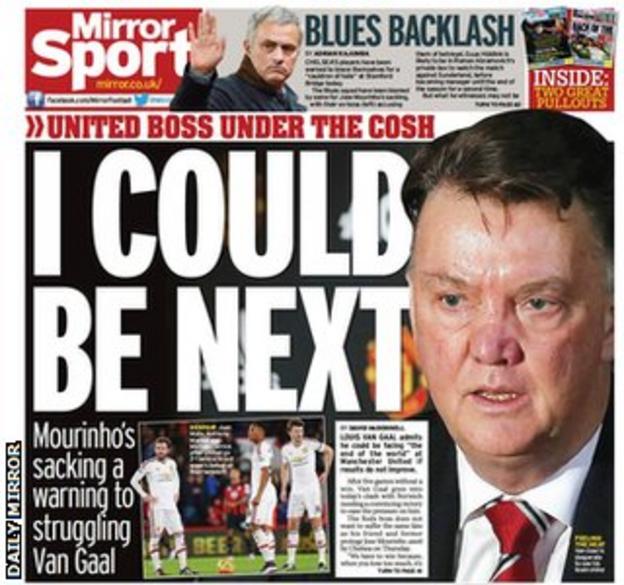 Swansea have made a loan bid for Chelsea striker Loic Remy, 28. (Daily Mirror)

Stoke playmaker Bojan Krkic, 25, linked with Manchester United and Liverpool, says feeling loved at the Britannia Stadium is the best place to be at this stage of his career.(Stoke Sentinel)

England midfielder Fabian Delph, 26, says it was a tough decision to leave Aston Villa in summer 2015 but that he made the "right decision" in joining Manchester City. (Times - subscription required)

Swansea may be forced to look elsewhere in their search for a new manager amid fears that former Argentina coach Marcelo Bielsa, 60, is reluctant to take over at the Liberty.(South Wales Evening Post)

Liverpool midfielder James Milner, 29, has not ruled out a return to his first club Leeds. (Yorkshire Post)

Manchester United manager Louis van Gaal says he will not recall striker James Wilson from his loan stint at Brighton unless they reach crisis point, commenting: "When we are in trouble we can recall him. That's a decision when it comes - maybe and maybe not." (Manchester Evening News)

Aston Villa's players and staff could have to take pay cuts if the club - who are bottom of the Premier League - are relegated. (Times - subscription required)

Sampdoria have reportedly placed an £11m price tag on Norwich transfer target Eder, the 29-year-old Brazil-born Italy international striker, who has scored 11 goals for club and country so far this season.(Eastern Daily Press)

"Player power is not a new thing" - Jermaine Jenas shares his thoughts on suggestions Jose Mourinho "lost the dressing room". (Listen to the clip) 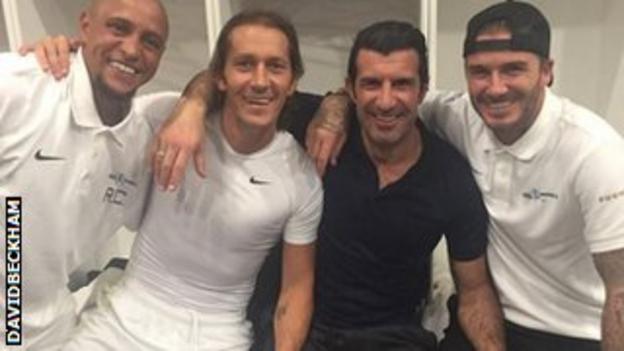 David Beckham sends an Instagram picture of a rendezvous with his former Real Madrid team-mates including Roberto Carlos and Luis Figo and writes: "Boys are back in town ... Couldn't resist being back on the field with these guys again... Makes me miss Madrid."

Sunderland striker Fabio Borini scored the winner against Chelsea last season to inflict Jose Mourinho's first home Premier League defeat in 78 games as Blues boss, and before the first match since the manager's departure Borini posts a picture of his celebration that day and writes: "Hoping to create some more good memories at Stamford Bridge tomorrow."

Norwich midfielder Elliott Bennett celebrates his 27th birthday and writes:"Thanks for all the birthday messages. Another year older, wiser and thinner on top! Much appreciated."

Theo Walcott has challenged Arsenal team-mate Hector Bellerin to a race after a long, drawn-out debate over who is faster. (Metro)