Manchester United manager Louis van Gaal, 64, faces the biggest game of his tenure at Liverpool on Sunday, with the club's hierarchy worried about their Champions League qualification prospects.(Times - subscription required)

Manchester United sponsor Adidas wants Barcelona and Argentina forward Lionel Messi, 28, to be reunited with Pep Guardiola, who is leaving his post as Bayern Munich coach this summer, at Old Trafford.(Marca)

Chelsea have made a £40m offer for Real Madrid's 26-year-old Germany midfielder Toni Kroos, who has also been linked with Liverpool and Manchester United.(Fichajes, via Daily Star)

The Blues are competing with Inter Milan and Barcelona for the capture of Paris St-Germain striker Ezequiel Lavezzi, 30. (Daily Mirror)

Liverpool have agreed a deal to sign Schalke's Cameroon centre-back Joel Matip, 24, on a free transfer at the end of the season.(Daily Mirror)

Bayern Munich sporting director Matthias Sammer has not said whether 23-year-old Germany midfielder Mario Gotze, who is believed to be a target for Liverpool, will stay with the German champions.(Daily Express)

West Brom striker Saido Berahino, 22, may have to stay at the club for the rest of the season as Tottenham are unwilling to pay the £23m they offered for him last summer, while Spurs boss Mauricio Pochettino is unsure he is the right player in his search for a forward.(Sun)

Stoke are set to move for Berahino - and believe they can beat Tottenham to the signing of the England Under-21 international.(Times - subscription required)

Charlton forward Ademola Lookman is wanted by Manchester City and Chelsea, with Everton and Tottenham also expressing an interest in the 18-year-old.(Independent)

Barcelona forward Neymar, 23, has been ordered to appear in court over his transfer to the Nou Camp from Brazilian club Santos in 2013.(Guardian)

Aston Villa manager Remi Garde is hoping to sign Bordeaux's Senegal defender Lamine Sane, 28, on loan for the rest of the season.(Telegraph)

Chelsea's Ghana left-back Baba Rahman, 21, is growing frustrated with his lack of first-team football since joining the Blues from Augsburg in August.(Bild, via Guardian)

West Ham striker Andy Carroll, 27, is facing up to two months out with a hamstring problem. (Daily Mail)

Carroll was due to have a scan on his hamstring injury on Wednesday and, judging by this tweet, it appears it wasn't good news.

Leicester moved level on points with Premier League leaders Arsenal with a 1-0 win over Tottenham - and goalscorer Robert Huth got a kiss from left-back Christian Fuchs as a reward. 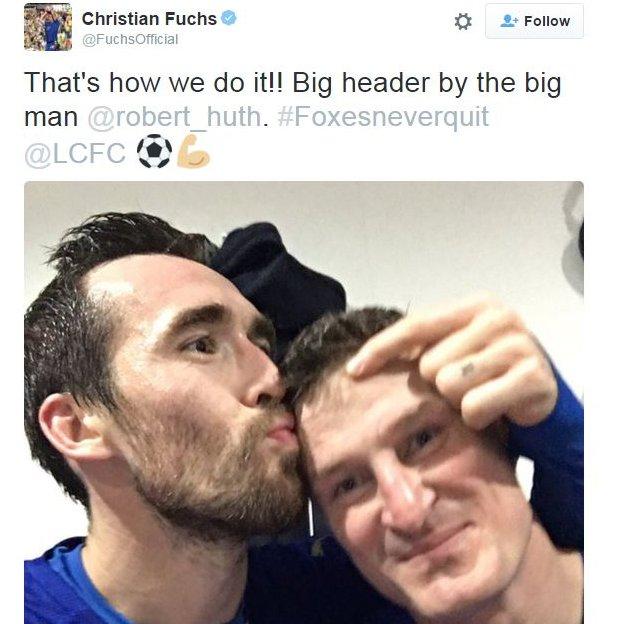 French club Toulouse gave their fans letters to try to excuse them from work so they could attend the club's cup tie against Marseille, which was scheduled for 4pm French time on Wednesday. Toulouse won 2-1. (Metro)