Pep Guardiola may be sacked at Bayern Munich before Manuel Pellegrini leaves Manchester City, with Bayern bosses unhappy he has already committed to City with important months of the season still to go. (Express)

The Spaniard will become City's manager even if they fail to qualify for the Champions League. (Mirror)

Guardiola plans to bring Austria left-back David Alaba, 23, with him from Bayern Munich this summer. Alaba has two years left on his contract and is rated at £40m, which would be a world record for a full-back. (Daily Star)

Manchester City are launching an ambitious bid to lure defender John Stones, 21, from Everton and could use striker Wilfried Bony, winger Jesus Navas and defender Eliaquim Mangala as part of the deal. (People)

Manchester City manager Manuel Pellegrini says midfielder Yaya Toure, 32, will decide his future in the summer - but only after playing a big part in the club's bid for a quadruple of trophies. (Express)

Paris St-Germain and Uruguay striker Edinson Cavani, 28, could be one of Jose Mourinho's first targets if he becomes Manchester United boss and would cost in the region of £35m. (Lta Sport Press - in Italian)

Red Devils' midfielder Marouane Fellaini, 28, is the latest player to be sounded out by agents for the lucrative Chinese Super League. (Daily Star)

Leicester midfielder Riyad Mahrez, 24, could be a target for Manchester City and Borussia Dortmund in the summer. (Le Beteur - in French)

Leicester's players will get a £1m squad bonus and a trip to Vegas if they win the Premier League. (The Sun)

Arsenal remain confident that midfielder Mesut Ozil, 27, will stay at the club past this season and sign a new contract, despite stories linking him with a move to Barcelona. (Sunday Telegraph)

Barcelona goalkeeper Marc-Andre ter Stegen, 23, is not thinking about a move to Liverpool in the summer. (Mundo Deportivo - in Spanish)

Liverpool are keen on signing Borussia Moenchengladbach and Norway defender Havard Nordtveit, 25, who is a former Arsenal trainee.(People)

Arsenal could make a move for Leicester's Paris-born midfielder N'Golo Kante, 24, in the summer. (Mirror)

PSG and Brazil winger Lucas Moura, 23, says he turned down Manchester United to join the French champions because there are several Brazilians in their squad. (Squawka)

Harry Kane is taking inspiration from Manchester United's 'Class of 92' as Tottenham's young guns go for the title. (The Sun)

Tottenham are closing in on a double deal that would see the club spend a season playing Premier League matches at Wembley and all cup games at MK Dons, while their new stadium is built. (Mail)

Charlton have apologised to the family of one of their former players after the wrong photo appeared on screen during a tribute. (London Evening Standard)

Following the 2-1 defeat at Sunderland, Manchester United goalkeeper David de Gea said: "Time to stand up, work and take Man United to the place it deserves."

After keeping his sixth consecutive clean sheet in a 1-0 win at Swansea, Southampton goalkeeper Fraser Forster tweeted: "Excellent three points and a clean sheet. The travelling fans were amazing."

Before Sunday's home game against Liverpool, injured Aston Villa midfielder Jack Grealish wrote: "Gutted I'm not fit for tomorrow's game but ankle is feeling much better now. Come on boys, a win would be lovely."

After letting slip a 2-0 lead at home to West Ham, Norwich's Cameron Jerome said: "Same mistakes again keep costing us. We have to all stick together and keep fighting till the end. Still a lot of points to play for." 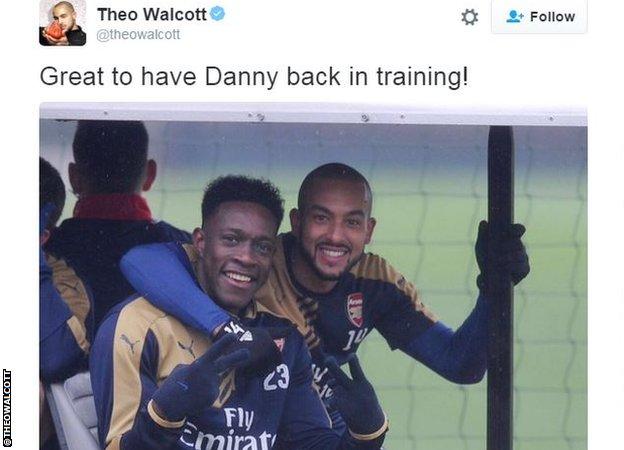 Arsenal forward Theo Walcott is hoping to have Danny Welbeck back in the Gunners' first team soon.

Gunners midfielder Aaron Ramsey was one of many to tweet tributes to fellow Welshman Jack Collison following the ex-West Ham United midfielder's retirement at the age of 27 because of injury. He said: "Sad to see Jack Collison retire, plenty of great memories playing with you for Wales. Much to admire about your career, good luck mate."

After being booked for 'simulation' against Manchester United, Sunderland's on-loan defender DeAndre Yedlin said: "Bad dive by me, kids don't do that lol! But great fight from the team to get three points today! Support was unreal!"

Watford's Valon Behrami helped his team to a 2-1 win at Crystal Palace and then made a young fan very happy by giving him his shirt, gratefully accepted and returned with a tweet: "thanks for the shirt, you played great today."

A request from Peter Odemwingie on Twitter after he was an unused substitute in Stoke's 3-1 win at Bournemouth: "Our fans were class today. A support like that deserves 3 points! Need help with words to Philip W's song though. Can someone help pls."

Liverpool striker Daniel Sturridge has been banned from wearing his own branded hat at the club with players only allowed to wear kit from the official suppliers, apart from their boots. (Sun)