The Red Devils are also set to open talks with Atletico Madrid over a deal to sell 27-year-old midfielder Juan Mata. (Daily Express)

Chelsea forward Eden Hazard, 25, says he would struggle to turn down the chance to move to Paris St-Germain in the transfer window. (Le Parisien via Guardian)

But Blues boss Guus Hiddink has warned Hazard he needs to start turning it on for Chelsea before daring to talk about a move to PSG. (Daily Express)

FA Cup replays could be scrapped with ties played in midweek, while League Cup semi-finals might be reduced to one leg in plans to reduce the number of games for top-flight clubs. (Sun)

Southampton are ready to cash in on £30m-rated Sadio Mane this summer, with Manchester United and Manchester City keen to sign the 23-year-old Senegalese. (Daily Mirror)

Liverpool striker Daniel Sturridge, 26, has been "hurt" by questions about his commitment during his injury nightmare, according to Reds skipper Jordan Henderson. (Daily Express)

AC Milan coach Sinisa Mihajlovic has hinted that Liverpool striker Mario Balotelli, 25, may have played his last match on loan for the Italian club. (Liverpool Echo)

Newcastle boss Steve McClaren's future could be decided in the club's next two games at Stoke on 2 March and at home to Bournemouth three days later. (Guardian)

Newcastle striker Papiss Cisse, 30, has given the struggling Premier League club a boost by declaring himself fit after being out for six weeks with a groin injury. (Daily Mirror)

The Professional Footballers' Association has apologised to Sunderland goalkeeper Steve Harper after calling the 40-year-old "emotional" over his calls for the union to do more to help players with depression. (Daily Telegraph)

Referee Mark Clattenburg is under investigation by the referees' governing body for potential conflict of interest after signing for an agency that also represents players. (The Times - subscription required)

Watford goalkeeper Heurelho Gomes turned 35 on Monday and his team-mate Troy Deeney made sure he was aware of his priorities by tweeting a picture of a message he sent him about bringing in the cakes. 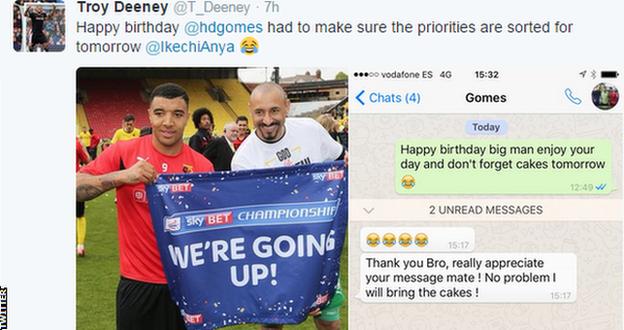 Sunderland boss Sam Allardyce, 61, may have revealed himself as a surprise Beyonce fan after posting a tweet plugging her concert at the Stadium of Light, adding: "I hear she is a secret Sunderland fan too."

Rubin Kazan and Amkar struggled with an unusual problem during their friendly match - the net was blown off the pitch. (Metro)