Paris St-Germain forward Zlatan Ibrahimovic, 34, could be heading to England. Asked about his future, he said: "I have another three months here and then what will happen? Big things will happen. Is the Premier League something I fancy. Let's just say I'm in shape." (Daily Mirror)

Jose Mourinho, 53, has turned down offers from Italy and China as he waits for the manager's job at Manchester United to become available.(Sun)

Leicester are set to spend £20m apiece on CSKA Moscow striker Ahmed Musa, 23, and Dynamo Kiev defender Aleksandar Dragovic, 24 - as long as they qualify for the Champions League. (Daily Mirror)

Chelsea are in talks to sign Edinson Cavani and have prepared a huge contract for the 29-year-old Paris St-Germain forward. (Metro) 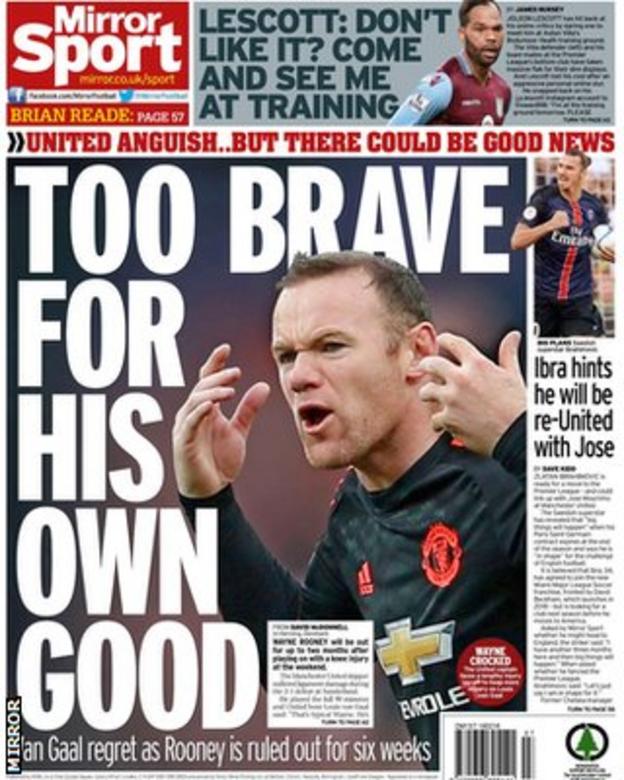 Former Chile boss Jorge Sampaoli, 55, is back in the frame for the Chelsea manager's job. (Sun)

Former Arsenal midfielder Robert Pires has dismissed Danny Mills' claim that he and Thierry Henry were "disrespectful" to Manchester City when they attempted, unsuccessfully, to take a 'tap' penalty against Manchester City in 2005. (Times - subscription required)

Blackburn manager Paul Lambert says he wanted to resign as Aston Villa boss at the end of his second season in charge but owner Randy Lerner would not accept it. (Daily Express)

Tottenham manager Mauricio Pochettino, 43, has hinted he will rebuff any offers from abroad and stay in English football. (Evening Standard)

Out-of-favour West Brom left-back Sebastien Pocognoli, 28, wants to stay and fight for his place at The Hawthorns. (Birmingham Mail)

Former Liverpool striker Stan Collymore has posted on Twitter that Watford striker Troy Deeney should be included in the next England squad.

Fulham left-back Luke Garbutt has tweeted an apology to fans, describing his performance in the 3-0 defeat by Blackburn as "simply not good enough".

Former Manchester United and Arsenal striker Robin van Persie - now at Fenerbahce - has been filmed singing along to R Kelly's When a Woman's Fed Up.(YouTube)

A film - called From The Streets - is being planned about the life of former Arsenal, Liverpool and Stoke winger Jermaine Pennant. (Times - subscription required)

Chelsea and former Manchester United striker Radamel Falcao has had a Salford hair stylist travel all the way down to London to give him a Brazilian blow dry. (Daily Mail)

Manchester United's kit sponsor Adidas has released a T-shirt which appears to mock the club's boring style of play. (Sun)