Pep Guardiola wants to make 21-year-old Athletic Bilbao defender Aymeric Laporte his first signing when he becomes Manchester City manager in the summer. The France Under-21 international is believed to have a release clause in his contract of about £40m. (Sun)

Manchester United are weighing up a move for Hull left-back Andrew Robertson but Arsenal, Manchester City and Tottenham have also been watching the 21-year-old Scotland international. (Daily Star)

Arsenal are weighing up a move for 20-year-old Newcastle winger Rolando Aarons, who has failed to agree a new contact with the Magpies. (Daily Mirror)

Newcastle are keen to sign Lyon's French defender Samuel Umtiti, 22, if they can avoid relegation from the Premier League. (Sun)

Sunderland boss Sam Allardyce does not believe midfielder Jack Rodwell, 24, is struggling with a crisis of confidence after his failure to score against West Ham on Saturday. (Sunderland Echo)

Everton manager Roberto Martinez says Villa - who his side face on Tuesday - have been "damaged" over the past four seasons. (Liverpool Echo)

Leicestershire Police have started planning for European football nights at Leicester City's King Power Stadium. The Foxes are two points clear at the top of the Premier League table with 11 games to go.(Leicester Mercury)

Manchester City goalkeeper Willy Caballero, who saved three penalties in the League Cup final shootout, was mobbed by team-mates for his heroics. City skipper Vincent Kompany tweeted a picture of the celebrations afterwards with Yaya Toure, who scored the winning spot-kick, sitting on the sidelines.

But Toure did get in on the celebrations as Manchester City tweeted a picture of the midfielder with musician Noel Gallagher and, in reference to the latter's popular song, the message: "A champagne (supernova) moment..." 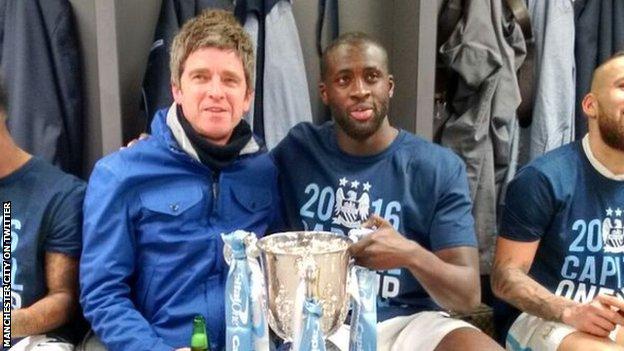 Noel Gallagher was asked about his score prediction for the final against Liverpool outside Wembley before the match - and said that Manchester City would win on penalties with Yaya Toure netting the winner. (Daily Mirror)