Manchester United are ready to offer Jose Mourinho a £60m deal to take over as manager. He would be the highest-paid football boss in history. (Sun)

West Brom head coach Tony Pulis and owner Jeremy Peace will have a crunch end-of-season meeting to determine the boss's future, despite a year remaining on his contract. (Mirror)

Everton and Belgium striker Romelu Lukaku, 22, is at the top of his old club Chelsea's summer transfer plans with prospective new manager Antonio Conte keen to see Lukaku return to Stamford Bridge and lead the attack.(Sun)

Meanwhile, Everton are interested in signing Ajax's 26-year-old Netherlands goalkeeper Jasper Cillessen as a replacement for Tim Howard, who is set to return to Major League Soccer. (Liverpool Echo)

Chelsea goalkeeper Thibaut Courtois, 23, has offered no guarantees over his Blues future next season amid interest from Real Madrid. (Evening Standard)

Spanish side Sevilla are looking to sign Anderlecht midfielder Dennis Praet, 21, who has been the subject of interest from Liverpool. (Fichajes, in Spanish)

Swansea are in pole position to snap up Reading and Wales forward Hal Robson-Kanu, 26, on a free transfer when his contract expires this summer. (Mirror)

Arsenal and Chelsea made late transfer bids for 16-year-old attacking midfielder Lucas Patanelli, who is set to join Barcelona from Argentine side Independiente. (Marca, in Spanish)

Bolton's ex-England striker Emile Heskey, 38, says he gets stopped "all the time" by people thanking him for his goal in England's famous 5-1 win over Germany in 2001. (Daily Mail)

Belgium striker Christian Benteke, who has scored eight goals this season, is Liverpool's top earner on £140,000 a week, while Spanish defender Jose Enrique, who has only started two games, is the seventh best paid player at Anfield on £75,000 a week. (Daily Star)

Jordi Cruyff has posted a moving tribute on Twitter to his father Johan, who died on Thursday. 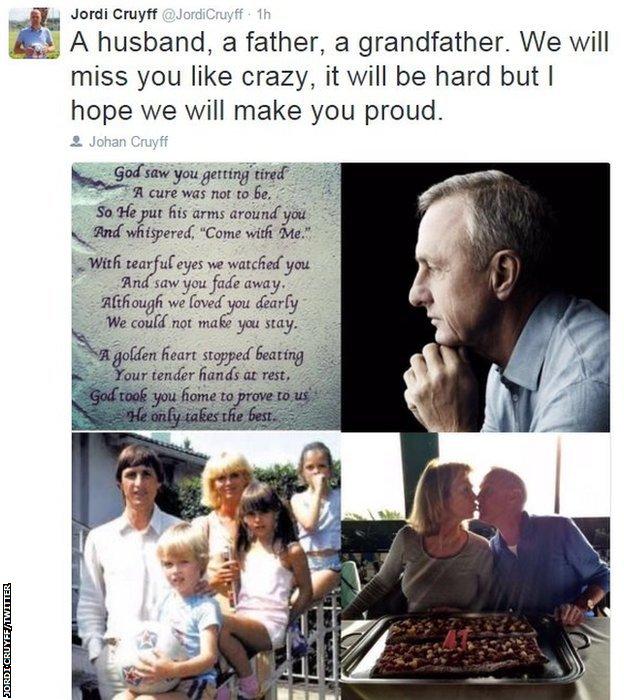 Former England captain John Terry has gone skydiving in Dubai, posting a picture on Instagram and writing: "I can tick this off my bucket list."

David Beckham was a dab hand at free kicks during his career and now he has shown he is a dab hand with a needle and thread. Wife Victoria captured the former England captain knitting a dress for one of his daughter's dolls on her Instagramaccount.

On a sunny day in London, Queens Park Rangers midfielder Alejandro Faurlin, 29, posted a photo on Instagram of himself relaxing in Richmond Park.

Arsenal's teenage midfielder Alex Iwobi, who played for England Under-18s, has made his competitive international debut for Nigeria against Egypt. The nephew of ex-Bolton star Jay-Jay Okocha tweeted afterwards: "Unlucky Not To Win But Happy To Have Made My Competitive Debut For Nigeria. Would Also Like Thank You To England For Giving Me The Chance To Represent Them."

Injured Clyde midfielder Scott Ferguson, 21, was sent a letter of support and a signed shirt by Borussia Monchengladbach winger Patrick Herrmann, who has just recovered from his own knee problem. (Squawka)

Meryem Ruacan, a 100-year-old fan of Turkish club Besiktas was so desperate to see their new stadium that she asked to be taken there on a hospital trolley. (Sun)

An effigy of Valencia boss Gary Neville was burned as part of the city's Las Fallas festival of fire, featuring fireworks and gunpowder explosions. (Mirror)

Non-League side Hereford want to parade a bull at Wembley before the FA Vase final against Morpeth Town on 22 May and have approached the Football Association for permission. (Guardian)