Pep Guardiola wants to build his Manchester City team around Juventus and France midfielder Paul Pogba, 23, when the new manager arrives from Bayern Munich in the summer. (Sport)

City midfielder Yaya Toure, 32, is ready to quit the club this summer with Bayern Munich, Juventus and Paris St-Germain all interested in his signature. (Sun)

Roma midfielder Radja Nainggolan, 27, will consider a move to Chelsea, with the Belgium international set to cost about £35m. (Evening Standard)

Defender Marcos Rojo, 26, will be allowed to leave Manchester United this summer, with the club willing to listen to offers for the Argentina international. (Daily Mirror)

Former Manchester United and Everton manager David Moyes is the frontrunner to take over at Aston Villa following the exit of Frenchman Remi Garde. (Daily Star)

Real Madrid will beat several Premier League clubs to the signing of Borussia Dortmund striker Pierre-Emerick Aubameyang, 26, by offering £54.9m plus 23-year-old Juventus forward Alvaro Morata, who they have the option to buy back. (Bild - in German)

Liverpool have made an enquiry for River Plate striker Lucas Alario, 23, who has scored 10 goals in 19 games for the Argentine club this season. (ESPN)

Juventus are ready to offer PSG striker Edinson Cavani, 29, a three-year contract worth £16m to fend off interest from Arsenal and Manchester United. (Tuttosport via Talksport)

Forward Robert Lewandowski is close to agreeing a new contract that will keep the 27-year-old Poland international at Bayern Munich until 2021. (Bild - in German)

Romelu Lukaku's agent has cast further doubt on his Everton future by declaring the 22-year-old striker is "ready to play in the best European teams". (DH via Liverpool Echo)

The Old Trafford club sent scouts to watch £60m-rated Sanches in action for Portugal against Belgium on Tuesday. (Daily Mail)

Chelsea midfielder John Mikel Obi, 28, says he will look to leave if he is not guaranteed a regular role next season. (Goal.com)

Barcelona midfielder Arda Turan, 29, says Arsenal were his 'plan B' if he did not play well enough to join the Spanish club last summer. (Diari Ara via Independent)

West Ham are in talks with Valencia over a £2.4m deal for 18-year-old forward Toni Martinez, but the La Liga side want a buy-back option on the Spain youth international. (Daily Mail)

Manchester City are one of four clubs who have enquired over the availability of Zenit St Petersburg and Belgium midfielder Axel Witsel, 27. (Gazetta dello Sport via Talksport)

Tottenham are interested in 21-year-old French striker Sebastien Haller, who has scored 21 goals in 31 games for Dutch side FC Utrecht this season. (Voetbal International - in Dutch)

Swansea midfielder Leon Britton, 30, says he has been playing with a foot injury that runs in the family to help the club's bid to stay in the Premier League. (South Wales Evening Post)

Former Sunderland boss Paulo di Canio has given fellow Italian Antonio Conte some advice about managing in England - "don't do it like Di Canio". (Daily Mail)

Jack Wilshere, a product of the Arsenal youth academy, was quick to congratulate the club's under-17s on Twitter after they beat Anderlecht. 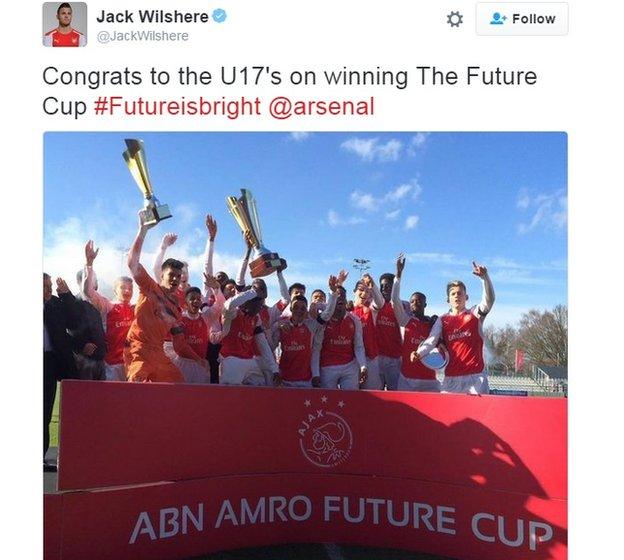 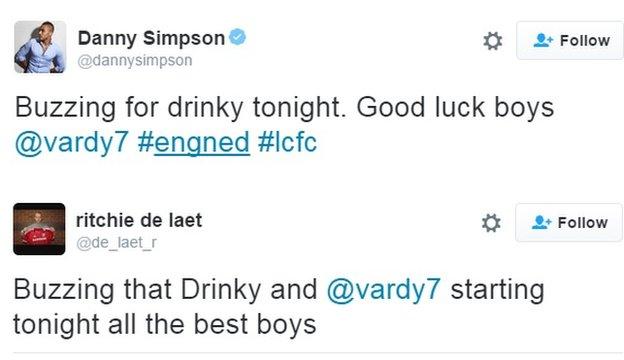 Liverpool defender Jose Enrique was braced for some ice-cold recovery after training, tweeting this picture: 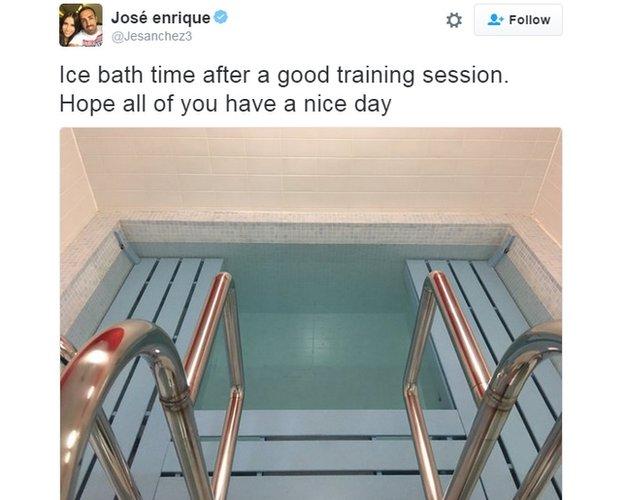 Arsenal forward Alexis Sanchez has funded two artificial pitches for children in Tocopilla, his home town in Chile, and hands out presents whenever he returns. (Arsenal.com)