Italy manager Antonio Conte has been spotted in London and is due to meet with Chelsea officials on Monday in order to sign a contract to become their new boss in the summer. (Gazetta World)

Interim Blues manager Guus Hiddink will urge his ­successor to see youth as the future and ensure that the talented players emerging from the club's academy have a clear pathway to the first team. (Telegraph)

Rooney, 30, insists he still has a few years left as an England striker. (Sun)

Manchester United are edging closer to a deal for Benfica midfielder Renato Sanches after telling the Portuguese club they will pay up to £40m for the 18-year-old. (Metro via A Bola)

Arsenal and England star Jack Wilshere, 24, was "involved in an altercation" between two groups of men outside a London nightclub in the early hours of Sunday morning. (Mirror)

England players' wives and girlfriends will be barred from the £500-a-night hotel where the national team is staying throughout the summer tournament in France. (Daily Star)

Borussia Dortmund striker Pierre-Emerick Aubameyang, 26, is ready to show Jurgen Klopp he has moved up another level as he prepares for a reunion with the manager he says "made" him. Dortmund face Liverpool in the Europa League quarter-finals with the first leg in Germany on Thursday. (Mail)

The agent of Aston Villa Danish defender Jores Okore, 23, has accused club owner Randy Lerner of giving up on the Premier League basement side. (Mirror)

Former Chelsea boss Jose Mourinho has emerged as a top target to take over as manager of the Syrian national team. (Sun)

Manchester City winger Patrick Roberts, 19, is aiming to end the season as a regular with Celtic as his loan in Scotland continues. (Manchester Evening News)

West Ham manager Slaven Bilic says he is fed up of appealing against red cards this season after Cheikhou Kouyate was sent off in Saturday's 2-2 draw at home to Crystal Palace. (Standard)

Real Madrid have an agreement in place with Manchester United for goalkeeper David De Gea, 25, according to former president Ramon Calderon. (Talksport)

Chelsea target Edison Cavani, 29, will hold talks with current club Paris St-Germain as the Uruguay forward looks to determine his future with the French champions. (Telefoot via Standard)

Those who backed Leicester City to win the Premier League title with Betfred have cashed in, with the firm paying out after the Foxes' 1-0 win over Southampton. (Racing Post)

Sunday was a special day for Manchester United and Sir Bobby Charlton with Old Trafford's South Stand renamed in his honour and a pre-match tribute before a 1-0 win over Everton. And Reds players, including David De Gea were quick to pay tribute to a man who has been associated with the club for 60 years. 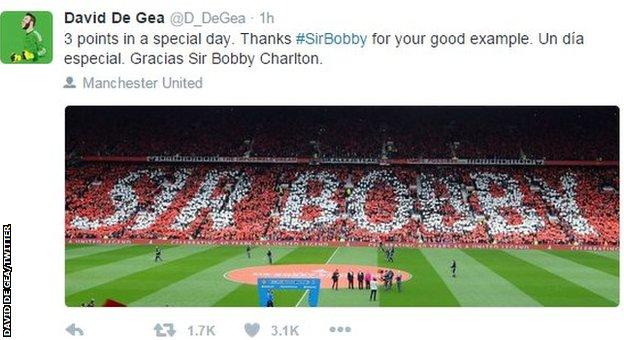 Among the Leicester spectators enjoying beer and doughnuts to celebrate the chairman's birthday was BBC Test Match Special commentator Henry Blofeld. "Amazing day of grand theatre at King Power Stadium watching Leicester beat Southampton," he tweeted. "Different game from one I wrote about 50 years ago!!"

The iconic open top bus that paraded Liverpool's Champions League-winning side through the city after their triumph in Istanbul in 2005 is now available to buy as a Lego toy. (Liverpool Echo)