Former Chelsea boss Jose Mourinho wants a written promise from Manchester United that he will be their new manager this summer. (Sun)

However, current manager Louis van Gaal, who still has one year left on his contract, has been given assurances over his future at the club. (De Telegraaf)

New Chelsea manager Antonio Conte was introduced to the Blues squad on Tuesday and will hold a series of individual meetings with those who wish to leave Stamford Bridge. (Mail)

Monaco striker Radamel Falcao, 30, has not been offered to Atletico when his loan deal at Chelsea expires in the summer, according to the Spanish club's president Enrique Cerezo. (Evening Standard, via Onda Cero)

Forward Theo Walcott, 27, could leave Arsenal if he is not included in England's Euro 2016 squad. (Bleacher Report)

Manchester City midfielder Yaya Toure, 32, will turn down a move to Inter Milan this summer, because he wants to stay in the Premier League. (Mirror)

Barcelona will not allow any approaches for forward Neymar, with Paris St-Germain lining up a £155m bid for the 24-year-old Brazilian forward. (Marca)

Atletico Madrid boss Diego Simeone says he can "imagine" himself managing Inter Milan in the future. (AS, via Sport Mediaset)

Germany and Real Madrid midfielder Toni Kroos, 26, could easily make the adjustment to the Premier League, according to his brother. (AS)

Norwich City striker Dieumerci Mbokani, 30, has told a Congolese radio station he does not want to play for Democratic Republic of Congo again.(Pink Un)

Paris St-Germain boss Laurent Blanc travelled to Old Trafford on Sunday to watch Everton's Romelu Lukaku, 22, in action against Manchester United and is now considering a bid in the region of £45m. (Star)

United are looking at Spain international Sergio Busquets, 27, with the midfielder demanding a pay rise at Barcelona. (Express via Fichajes)

Fabrizio Ravanelli, who played alongside Antonio Conte at Juventus, says Chelsea have "guaranteed" the title by naming the Italian as their new manager. (Sun)

Aston Villa are ready to offload Gabriel Agbonlahor, 29, this summer as they prepare for the Championship. (Telegraph)

Villa want TV pundit Andy Townsend, who spent four years as a player at the club, to make a surprise return to Villa Park as director of football. (Sun)

Sunderland have been taking their training to new extremes with a session on Roker beach, not far from the Stadium of Light, where the locals got a chance to see the players in action. 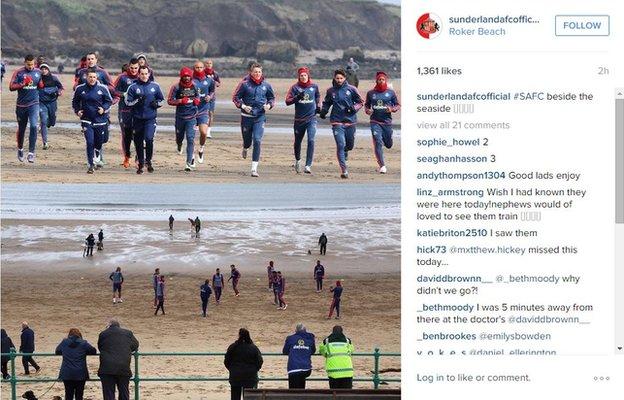 It has been a tough week for Newcastle goalkeeper Rob Elliot, who suffered a serious knee injury while on duty with the Republic of Ireland, which will rule him out of Euro 2016. But Elliot is trying to look on the bright side of things, giving a thumbs-up from his hospital bed after an operation. 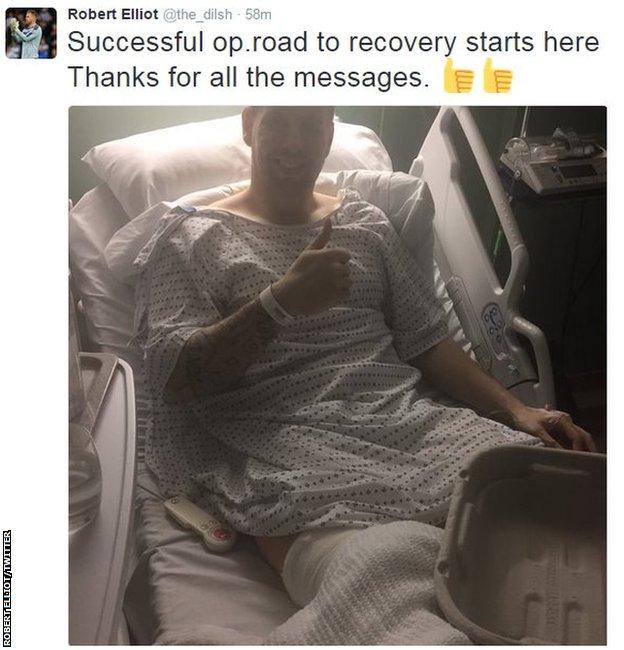 England Ashes hero Steve Harmison, who is now boss at Ashington AFC, is appealing against a 12-match ban after he was involved in an argument with a referee. (Sun)

Manchester City midfielder Fabian Delph claimed, in an interview with the club's YouTube channel, that he regularly sees ghosts. (Goal.com)

Leicester's mayor is ready to name the city's streets after the team's players should they complete a fairytale season by winning the Premier League title. (Times - subscription required)