The Football League is investigating Leicester's finances for the 2013-14 season amid concerns they may have cheated financial fair play rules. (Guardian)

Paris St-Germain captain Thiago Silva has warned team-mate Zlatan Ibrahimovic, 34, he would be taking a "step down" if he moves to the Premier League. (Mirror)

Manchester United are the only Premier League club to make an offer for Sweden's Ibrahimovic, who is out of contract in the summer. (L'equipe, via Daily Star)

United's players turned on manager Louis van Gaal after Sunday's 3-0 defeat by Tottenham, with some openly questioning his future. (Sun)

Jose Mourinho remains confident he will replace Van Gaal at Old Trafford and wants to sign five new players for the club this summer. (Daily Express)

Chelsea's goalkeeping situation is looking unstable for next season, as Thibaut Courtois, 23, is keen on a move to Real Madrid while Asmir Begovic, 28, does not want to stay without being first choice. (Telegraph)

Branislav Ivanovic could leave Chelsea in the summer, with Roma interested in the 32-year-old defender. (Talksport, via Corriere dello Sport)

West Ham striker Diafra Sakho, 26, could look to leave the club in the summer following a row with manager Slaven Bilic. (Sun)

Newcastle would have to pay their 24-year-old midfielder Jonjo Shelvey £80,000 a week in the Championship, as they did not agree a wage cut in the event of relegation.(Telegraph)

Jordon Ibe, 20, has fuelled speculation about his future at Liverpool by removing all references to the club from his Twitter profile. (Independent)

Bayern Munich chairman Karl-Heinz Rummenigge says he is happy to meet with Liverpool target Mario Gotze, 23, at the end of the season to discuss his future. (Daily Star)

Another Liverpool target, Piotr Zielinski, has confirmed he has held talks with Reds boss Jurgen Klopp. The 21-year-old Poland midfielder is on loan at Empoli from Udinese. (Metro, via Sportowe Fakty)

Southampton manager Ronald Koeman is so concerned about his young players wearing headphones and using social media that he has held special training sessions to help them communicate with each other. (Times - subscription required)

Neymar's Barcelona contract has been leaked and it shows the 24-year-old Brazil forward earns £77,000 a week and has a £153m buy-out clause. (Daily Mail)

Leicester manager Claudio Ranieri has taken to banning Jamie Vardy from shooting in training, so as to keep the 29-year-old striker fresh for games. (Guardian)

As Tottenham and England midfielder Dele Alli celebrated his 20th birthday, team-mate Eric Dier dedicated a photoshopped Instagram picture to the birthday boy. The caption read: "Happy birthday... always got your back."

West Ham goalkeeper Adrian went back to his roots with a night at a Spanish tapas restaurant in London. He tweeted a picture of himself dressed up for the occasion.

With word of Leicester reaching next season's Champions League came congratulations from manager Claudio Ranieri's native Italy and Juventus goalkeeper Gianluigi Buffon, no less. "Leicester is no longer a fairytale but a reality. Welcome to Europe coach Claudio Ranieri!" he tweeted. 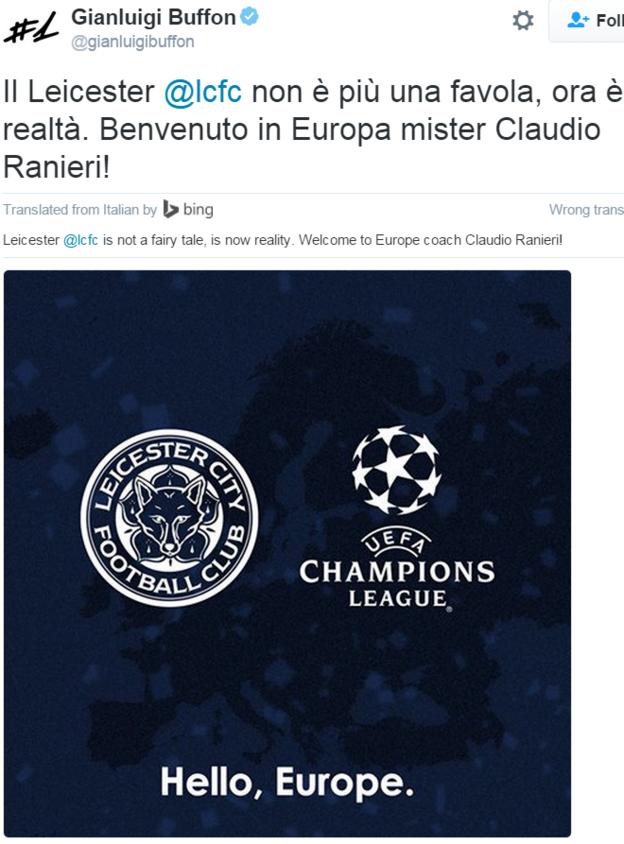 Leicester City defender Christian Fuchs says he wants Hollywood star Ryan Reynolds to play him in the as yet unmade "Jamie Vardy - The Movie". (Talksport)