United's value has fallen by £412m since the start of the season because of poor performances on the pitch. The club started the season with a market capitalisation of £2bn, which has now dropped to £1.58bn. (Sky Sports)

Meanwhile, Spurs and West Ham are leading the chase for Bournemouth striker Callum Wilson, 24, after his eight-month injury lay-off. (Sun)

Chelsea midfielder Eden Hazard, 25, will join Real Madrid in the summer for a £32m fee, with Paris St-Germain set to miss out on his signature. (OK Diario, via Express)

Real Madrid winger Gareth Bale, 26, is set to turn down a new Real Madrid contract in favour of a move to Manchester United or Manchester City.(Tuttomercatoweb - Italian)

West Ham will target forward Theo Walcott, 27, if they are unsuccessful in their pursuit of his Arsenal team-mate, 22-year-old midfielder Alex Oxlade-Chamberlain. (Bleacher Report)

But Southampton are ready to make Oxlade-Chamberlain their highest-paid player this summer. (Mirror)

Leicester boss Claudio Ranieri has admitted he faces a "terrible" last five games in the attempt to win the Premier League title and has promised he will congratulate Tottenham if they pip the Foxes.(Gazzetta dello Sport - Italian)

The psychologist at Premier League leaders Leicester says the side are so composed he was able to take a short mid-season holiday.(The Times - subscription required)

Former Chelsea and Liverpool striker Fernando Torres, 32, has given a strong hint that he wants to end his career at Atletico Madrid. (Cadena Ser via Talksport)

Tottenham defender Toby Alderweireld, 27, has admitted that he would "love" to return to former club Ajax at some point in the future. (De Telegraaf via London Evening Standard)

Sunderland manager Sam Allardyce admits the "writing is on the wall" for 32-year-old defender Emmanuel Eboue's future after revealing the club has not heard from him. (Sunderland Echo)

Newcastle defender Steven Taylor could be set to leave in the summer with the 30-year-old former academy player not yet being offered a new deal. (Daily Mail)

But midfielder Jonjo Shelvey, 24, has vowed to stay at Newcastle if they are relegated to the Championship. (Newcastle Chronicle)

Borussia Dortmund supporters will pay tribute to the victims of the Hillsborough disaster before Thursday's Europa League match against Liverpool at Anfield by holding up a mosaic before kick-off spelling out '96' in black and yellow. (Liverpool Echo)

Ghana boss Avram Grant will fly to England to try to persuade Manchester United defender Timothy Fosu-Mensah to represent the country where both his parents were born, despite the 18-year-old having played for the Netherlands at all youth levels. (Daily Star)

Bournemouth striker Callum Wilson, 24, "never doubted" he would return from his serious knee injury suffered in September as his family had kept up his spirits during his recovery. (Bournemouth Echo)

Liverpool defender Alberto Moreno has posted a picture on Instagram of his latest tattoo of a monkey on his leg. The monkey is carrying a gun, wearing a suit and glasses, while listening to his headphones. 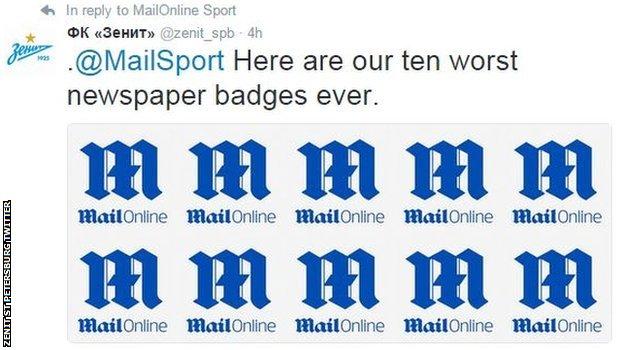 Russian side Zenit St Petersburg have responded on Twitter to an article in the Daily Mail online version including the club in their list of the top 10 worst crests by listing their own worst top 10 that features just one crest - Mail Online.

Stoke City striker Bojan Krkic told his followers on Twitter how much he was enjoying his trip to the Etihad as Manchester City beat Paris St-Germain to progress to the Champions League semi-finals for the first time.

Manchester City midfielder David Silva posted on Twitter soon after the game to show his delight at reaching the Champions League semis.

World heavyweight champion Anthony Joshua has revealed he had to give up playing Fifa 16 as the video game was effecting his intensive training regime. (Daily Telegraph)

Real Madrid boss Zinedine Zidane had a moment to forget as he ripped his trousers during the side's comeback against Wolfsburg. (Metro)