Manchester United and Chelsea have both expressed interest in signing Paris St-Germain defender Marquinhos, who is valued at about £40m, though the French champions would prefer a swap deal if they decided to allow the 21-year-old Brazil international to leave. (Daily Telegraph)

Manchester City are closing in on the £30m signing of Borussia Dortmund midfielder Ilkay Gundogan, 25. (Sun)

Wayne Rooney is facing a three-way fight for a place on England's right wing at Euro 2016, while Arsenal wingers Theo Walcott and Alex Oxlade-Chamberlain are set to miss out on the squad. (Mirror)

Leicester City captain Wes Morgan admits that the Premier League title is "in our hands" and also reveals he was told to lose two stone during a trial at Nottingham Forest. (Daily Mail) 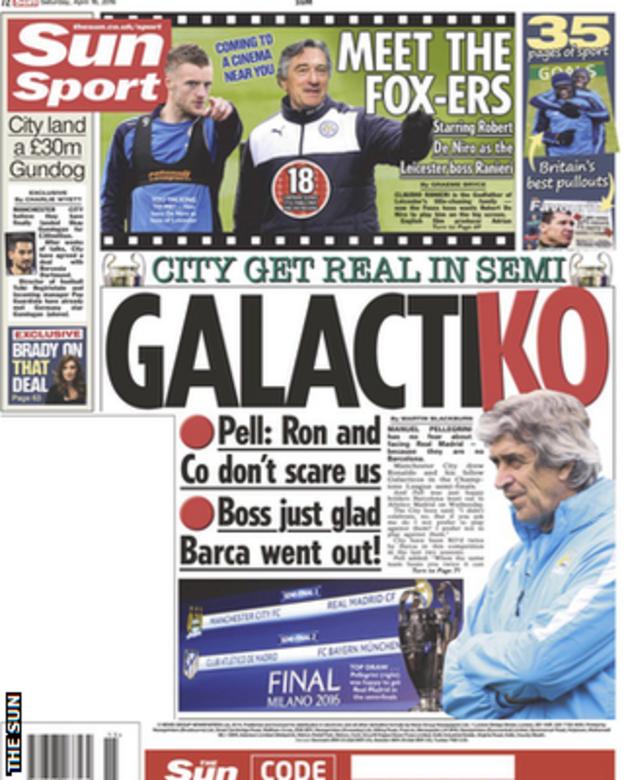 Manchester City midfielder Kevin de Bruyne has described his treatment by Jose Mourinho during his time at Chelsea as "just not fair". (Daily Telegraph)

And Chelsea midfielder Cesc Fabregas has admitted he "hardly knew" who De Bruyne was until this season. (Evening Standard)

Liverpool, Tottenham and Arsenal are all vying for the signature of 19-year-old Roma striker Umar Sadiq. (Star)

West Ham vice-chairman Karren Brady says of the club's Olympic Stadium move: "The fact we have struck a good deal for West Ham, the taxpayer and the community should be a cause for congratulations." (The Sun)

But Hammers manager Slaven Bilic has been blocked from discussing the club's controversial deal to take over the stadium. (The Times - subscription required)

Arsenal and Liverpool are set to do battle for the signature of 15-year-old Fulham left-back Ryan Sessegnon. (Mirror)

Manchester United's 18-year-old striker Marcus Rashford is not in consideration for Euro 2016, but could be elevated to the England Under-21 set-up soon. (ESPN FC)

West Ham chairman David Sullivan says he doesn't want any of the club's players to be selected by England. (Talksport)

Everton manager Roberto Martinez says striker Romelu Lukaku could play in the Merseyside derby on Wednesday and the FA Cup semi-final against Manchester United next Saturday, despite struggling with a groin injury. (Liverpool Echo)

West Brom boss Tony Pulis says he wants to freshen up the Baggies squad with some young signings this summer in a bid to reduce the average age. (Birmingham Mail)

Leicester midfielder Matty James will have to wait until next season to make his comeback from a cruciate ligament injury, manager Claudio Ranieri has confirmed. (Leicester Mercury)

Stoke playmaker Bojan Krkic is keeping it real with daily chores, posting a picture of his food shop and tweeting: "Supermarket trip for me on our day off! Healthy food!"

Liverpool's 4-3 win over Borussia Dortmund in the Europa League was confirmed as the UK's most tweeted-about moment of 2016 so far, beating Adele's Global Success Award at the Brit Awards. (Twitter UK)

A Liverpool fan lost his phone on the Anfield pitch during the post-match celebrations - and got it back complete with a selfie of Reds defender Mamadou Sakho. (Mirror)

Watford defender Nathan Ake has revealed that Chelsea's army of loan players across Europe keep in touch via a mutual WhatsApp group. (Guardian)