Manchester United and Chelsea are both interested in signing Atletico Madrid forward Antoine Griezmann this summer, although there are fears over the 25-year-old's Premier League suitability. (Daily Mail)

Jose Mourinho has not opened dialogue with the French champions Paris St-Germain and remains certain he will manage at Old Trafford next season. (Manchester Evening News)

David Moyes has refused to rule out the possibility of becoming Celtic's next manager, after it was announced that Ronny Deila will leave at the end of the season. (Guardian)

Former Newcastle midfielder Hatem Ben Arfa is set for a return to the Premier League, with Liverpool weighing up a summer move for the 27-year-old Nice player. (Sun)

AC Milan want to sign Newcastle midfielder Moussa Sissoko, 26, if the Magpies are relegated from the Premier League this season. (Calciomercato.com - in Italian)

Manchester United winger Adnan Januzaj, 20, is considering exploiting a Fifa loophole to switch his international allegiance from the country of his birth, Belgium, to Kosovo, for whom he is eligible through his family. (Sun)

Former Liverpool boss Brendan Rodgers is in line to return to manage Swansea, but he wants assurances about the transfer budget at his disposal before accepting the job. (Daily Mirror)

Villa are in talks with the Professional Footballers' Association as they consider their next move regarding suspended striker Gabriel Agbonlahor, 29. (Daily Telegraph)

Newcastle United will ask Rafa Benitez to remain as manager, even if they are relegated to the Championship at the end of this season. (Daily Telegraph)

Manchester United have completed the signing of full-back and Ireland Under-16 captain Lee O'Connor, 15, from Villa FC. (Irish Independent)

The American investment group looking to buy Swansea City have indicated that they want to be in charge of the club for at least 10 years. (South Wales Evening Post)

Manchester United Under-21s were crowned Premier League champions for a second consecutive season following a 3-2 victory over Tottenham on Tuesday night, with midfielder Joe Riley posting a picture of the celebrations from inside the dressing room...

Tottenham's fans gave their side a ringing endorsement on Wednesday, voting overwhelmingly on Twitter (by 57.93%) to award man of the match for Monday's 4-0 win at Stoke to the entire team.

On Tuesday, Manchester United's Chris Smalling posted a picture of his dog seeing the defender off to training from his car. Today, Arsenal midfielder Mesut Ozil has introduced his Twitter followers to his canine friend Balboa... 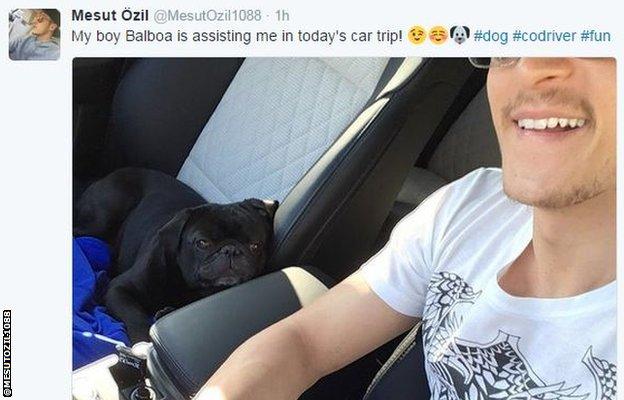 Speaking of Ozil, he is one of four players, along with Arsenal team-mate Jack Wilshere and Tottenham duo Harry Kane and Dele Alli, who feature in a video posted online saying "Time to go, Massimo" - the name of a Leeds United supporter group calling for Whites owner Massimo Cellino to sell the club.

Rafael Benitez has already lost his seat in the Newcastle dugout after it was stolen by Moussa Sissoko's young son before Tuesday's 1-1 draw with Manchester City. The United midfielder's son also signed an autograph for Benitez before allowing the Spaniard to reclaim his seat. (Daily Mail)

Crystal Palace are offering fans the opportunity to travel back with the squad from their final game of the season at Southampton on co-owner Jeremy Hosking's vintage steam locomotive, the Lord Dowding. (Sun)