Manchester United asked Jose Mourinho to wait a year before taking over as manager, so Louis van Gaal could see out his contract. But Mourinho believes he is closer than at any stage to being confirmed as the next United boss. (Sun)

Conte also plans to bring winger Juan Cuadrado, 27, back from a loan spell at Juventus but will sell midfielder Nemanja Matic, 27, to the Italian champions.(Daily Star)

Midfielder Eden Hazard, 25, also wants to be part of Conte's plans at Stamford Bridge after deciding to stay at Chelsea rather than pursue a possible move to Paris St-Germain or Real Madrid. (Daily Mail)

Chelsea fans will have to pay nearly £150 to wear a replica of next season's new kit. (Sun)

Roma's hopes of keeping Arsenal goalkeeper Wojciech Szczesny, 26, on loan for another season are fading as the Gunners are no longer willing to contribute to his wages. (Corriere dello Sport - in Italian)

Forward Bojan Krkic, 25, still believes his future lies at Stoke, despite spending more time on the substitutes' bench than the pitch in recent weeks. (Stoke Sentinel)

Tottenham Hotspur goalkeeper Hugo Lloris, 29, says there are "no regrets" and the team "gave their best" during the 2-2 draw with Chelsea, which confirmed Leicester City as Premier League champions. (Talksport)

Tickets for West Ham United's final game at Upton Park - against Manchester United on 10 May - are on sale for more than 10 times their face value. (London Evening Standard)

Bologna have told on-loan Sunderland forward Emanuele Giaccherini, 30, to make it clear to the Black Cats he wants to leave permanently. (Sunderland Echo)

Manchester United could beat Rangers to the signing of goalkeeper Kacper Chorazka after inviting the 17-year-old, who plays for Wisla Krakow, to train with them. (The Sun)

The next manager of Blackburn Rovers must work within the rules of Financial Fair Play and without Premier League parachute payments. (Lancashire Telegraph)

Sheffield United have not had talks about extending the contract of midfielder Jose Baxter, 24, who was suspended by the Blades for a second time in nine months in February. (Sheffield Star) 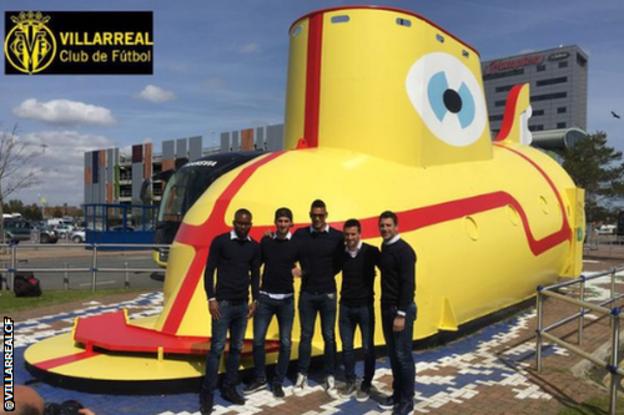 Players from Villarreal pose in front of a yellow submarine after landing in Liverpool before Thursday's Europa League semi-final second leg at Anfield. The Spanish side - nicknamed the Yellow Submarine - lead 1-0 from the first leg. 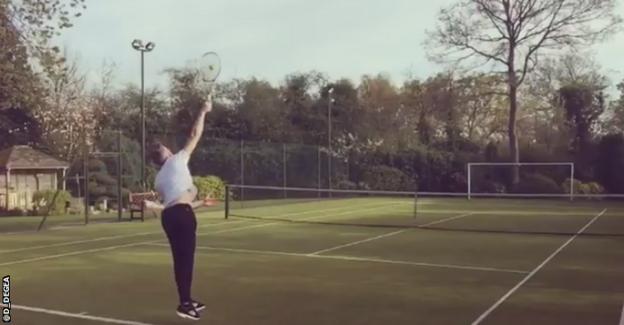 He is best known for stopping teams from hitting Manchester United's net, but keeper David de Gea demonstrated his racquet skills to his 5.32 million Twitter followers on Wednesday along with the message: "A good sunny afternoon to practice the service. Am I ready for Wimbledon?"

Southampton midfielder James Ward-Prowse is hoping to captain England Under-21s at the Toulon Tournament later this month. Gareth Southgate's side have been drawn in the same group as Guinea, Japan, Paraguay and Portugal. "The fixtures are out for the Toulon Tournament. Hopefully if selected I can captain my country again," tweeted Ward-Prowse.

Hearts striker Russell McLean went in goal for his side's under-20 fixture against Dundee after Kelby Mason became ill on the journey to the game. McLean conceded three goals but Hearts still came away with a draw.

An Argentine sports channel is promoting its coverage of the 2016 Copa America, to be held in the United States in June, by using one of US presidential candidate Donald Trump's speeches. (Daily Mirror)

A bridge named after former Wolverhampton Wanderers owner Sir Jack Hayward has been formally opened in the Bahamas. (Express & Star)